Sellers from tier II towns and beyond see jump in orders in Flipkart, Amazon festive sale

The festive season sees Amazon and Flipkart compete head on 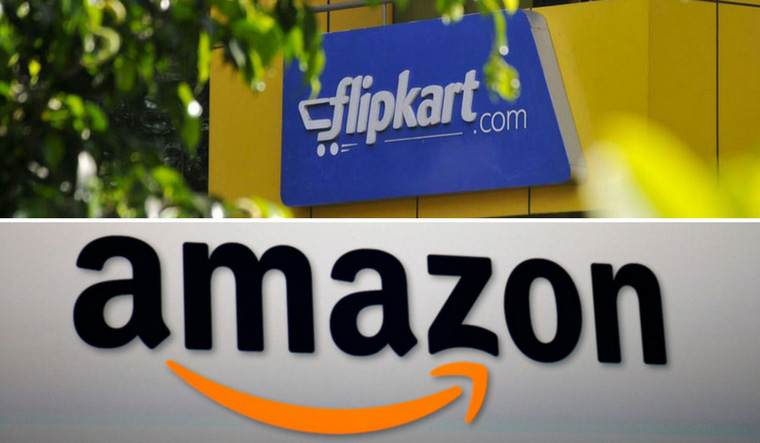 Walmart-owned Flipkart and Amazon India on Sunday said lakhs of sellers, including a significant chunk from tier II cities and beyond, are participating and receiving orders during the initial days of festive sale on their platforms.

The festive season sees Amazon India and Flipkart compete head on and roll out a number of offers and schemes to woo customers to shop on their platforms.

Amazon India on Sunday said over 1.1 lakh sellers on its platform received orders during the first 48 hours of its 'Great Indian Festival' sale, with a bulk of these sellers being from smaller parts of the country.

Flipkart, on the other hand, said over 3 lakh sellers are participating in its ''The Big Billion Days'' (TBBD) sale. Of these, about 60 per cent sellers are from tier II cities and beyond.

Amazon's 'Great Indian Festival' started on October 17 and will go on for about a month to coincide with the festive season. Amazon Prime members were provided early access to the sale from October 16.

Flipkart's annual TBBD sale began on October 16 and will end on October 21.

Speaking to PTI, Amazon India Vice President Manish Tiwary said, "These 48 hours were the biggest ever for Amazon in its seven-year history. We had created a buildup for the sale for our Amazon sellers...Over 1.1 lakh sellers received orders, and 66 per cent of them (sellers) came from small towns."

Amazon India, which has over 6.5 lakh sellers on its platform, registered its biggest spike in new customers, with 91 per cent of them coming from small towns (beyond the metros and top 40 cities), he added.

In a statement, Flipkart said over 3 lakh sellers are participating in its sale.

"The seller base reach has expanded by 20 per cent this year totalling up to 3,000+ pincodes. In just about 2 days of TBBD 2020, marketplace sellers have witnessed growth that they saw during the 6 days of TBBD 2019, showcasing the pent up demand they have seen from consumers across India," it added.

This festive period has seen over 70 sellers become crorepatis and about 10,000 became lakhpati through 'Early Access' and the three days of TBBD 2020, it added.

However, the players did not disclose the volume of orders received so far during their sale.

E-commerce companies see a large chunk of their business coming in during the festive sales, and they make significant investments ahead of time to ramp up their capacity to be able to handle the spike in orders.

A report by RedSeer estimates that festive sales this year are expected to almost double and touch USD 7 billion in gross merchandise value (GMV) as compared to USD 3.8 billion in the same period last year.

Tiwary said about 1.4 million people had shopped from small and medium businesses (SMBs) on its platform in the 10-day run up to the 'Great Indian Festival'.

He added that most of Amazon India's brand partners -- right from wireless manufacturers like Samsung, Apple, Xiaomi and OnePlus to electronics players like Asus, Lenovo, HP and appliances makers like LG, Whirlpool-- had their biggest ever 48 hours on Amazon.

"The new language launches (Tamil, Telugu, Malayalam and Kannada) just before Diwali seem to have a high engagement. Early signs show very good engagement on that front...We had a certain plan for the 48 hours and we are ahead of plans on almost every major category," Tiwary said.

"Home decor did well, apparels saw a spike that was well ahead of our plans and ahead of business as usual," he added.

Besides, affordability programs saw more than Rs 600 crore worth of credit (across options like EMIs and pay later programmes) being disbursed during Prime Early Access.

"If the first 48 hours is anything to go by, I am delighted on three fronts which are important for us -- seller success, consumer acquisition and shopping, and biggest ever day for Prime customers," he said.

Flipkart said through Early Access and the threee days of TBBD 2020, the platform witnessed a 1.5X higher spend per customer across EMIs and 'Flipkart Pay Later' transactions.

While cities such as Bengaluru, New Delhi, Mumbai, Hyderabad and Kolkata continue to lead the pack, tier III cities and beyond made up for almost 60 per cent of the demand this year, it added.

Fashion e-tailer Myntra, which is a part of Flipkart Group, said 50 per cent of shoppers on its platform on the first day (October 16) of its sale were from tier II and III cities.

"Our 'Big Fashion Festival' has had a fantastic start, with customers shopping for 1.2 million products in the first 12 hours, making it the biggest festive event at Myntra to date. We feel elated with the phenomenal opening response with over 20 lakh customers participating in the Big Fashion Festival so far," Myntra CEO Amar Nagaram said.

He added that shoppers in tier II and III cities and towns are likely to outdo their counterparts in big cities, in terms of shopping for fashion, this festive season.

Snapdeal said 65 per cent of the orders placed in the sale so far have been received by sellers located beyond the top 5 metropolitan areas of the country.

While sellers located in Delhi-NCR, Mumbai Metropolitan region, Kolkata, Chennai and Bengaluru account for nearly 35 per cent of the total number of orders received so far, it is the sellers from smaller cities who have received a greater share of online orders this year, it added.