GDP to decline by 10 per cent in FY21, say experts

If infections climb, lockdowns extend, economy to drop by 9.5%: Icra 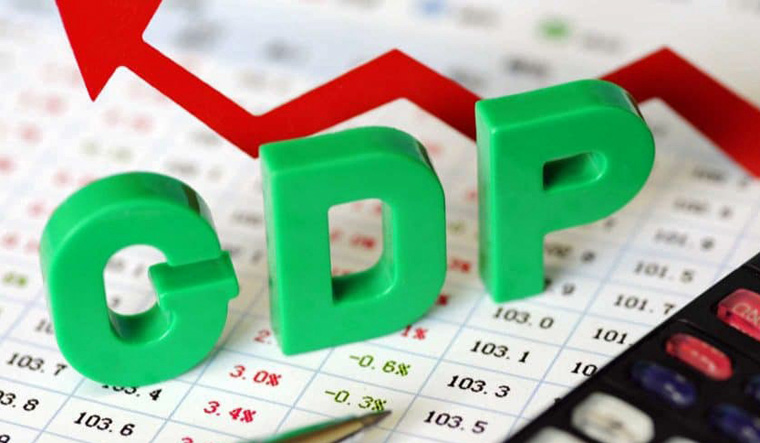 India's economy may shrink by around 10 per cent in the current fiscal due to the impact of the COVID-19 pandemic, experts said.

India's GDP shrank by the steepest ever 23.9 per cent in the April-June period as the coronavirus lockdowns battered an already slowing economy, official data showed on Monday.

Icra's Principal Economist Aditi Nayar said, "As expected, GDP (Gross Domestic Product) and GVA (Gross Value Added) plunged precipitously in the lockdown-ridden quarter of Q1 FY2021, both printing similar to our forecast of a 25 per cent contraction. Moreover, incoming data on the MSME and less formal sectors could manifest in a deeper contraction when revised data is released subsequently."

"With infections continuing to climb and some states extending local lockdowns further, we maintain our forecast that the Indian economy will contract by 9.5 per cent in FY2021," she added.

Sankar Chakraborti, Group CEO, Acuite Ratings and Research, said, "GDP would continue to contract in Q2 although the extent of such contraction would be substantially lower; overall in FY21, a 10 per cent contraction is a definite possibility given the slow pace of the revival."

The government had imposed a nationwide lockdown from March 25, 2020 to curb the spread of COVID-19 infections. The Centre began easing the lockdown for certain economic activities from April 20 onwards.

Most ratings agencies and economists had projected contraction in India's GDP for the first quarter of 2020-21.

According to health ministry data, the novel coronavirus tally in India crossed 36 lakh on Monday with 78,512 new cases, while the number of recoveries surged to 27,74,801, pushing the recovery rate to 76.62 per cent.

The death toll climbed to 64,469 with 971 more people succumbing to the infection in a span of 24 hours, as per the data.

Chandrajit Banerjee, Director General of CII said, "Even as the first half of the current fiscal is expected to remain weak, we can expect a recovery in the second half led by supportive fiscal and monetary policies."

"We have already started to see a discernible improvement in the many high-frequency indicators, which are expected to pick-up further, going forward. In this context, the localised lockdowns being imposed by state and district administrations may be avoided so that the economic recovery can be kept on track," he added.

Axis Securities' Chief Investment Officer Naveen Kulkarni said the market will look for the GDP recovery in the remaining months of FY21.

However, this will not be strong enough to offset the shock from Q1 and base effect will push up growth in FY22, he added.

Rohit Poddar, MD, Poddar Housing and Development Ltd and Joint Secretary, NAREDCO Maharashtra, said, "Government needs to strike a balance between healthcare and other sectors to pull out the negative number post which we can look at additional fiscal stimulus of 1 per cent of GDP to push the momentum even further."

Suvodeep Rakshit, vice president and senior economist at Kotak Institutional Equities, said the choice for the government will be on whether the consumption or the investment side needs to be pushed.

Given the limited fiscal space and the need to stimulate a more durable growth, the growth recovery will be gradual and is likely to continue into H1 FY22, he added.

Radhika Rao, economist at DBS Bank, said, "Besides downside risks to our annual growth forecast, negative nominal growth read will weigh on corporate profitability as well as widen debt/ deficit levels. The central bank is likely to still lean towards rate easing in second half of this fiscal year, while with its current focus has shifted to taming bond yields."

Nikhil Kamath, co-founder and CIO, Zerodha and True Beaco, said the slowdown, which started much before the pandemic, seems to have gotten worse.

"We would recommend caution at the current juncture and continue to hedge over 80 per cent of our long equity positions," he added.