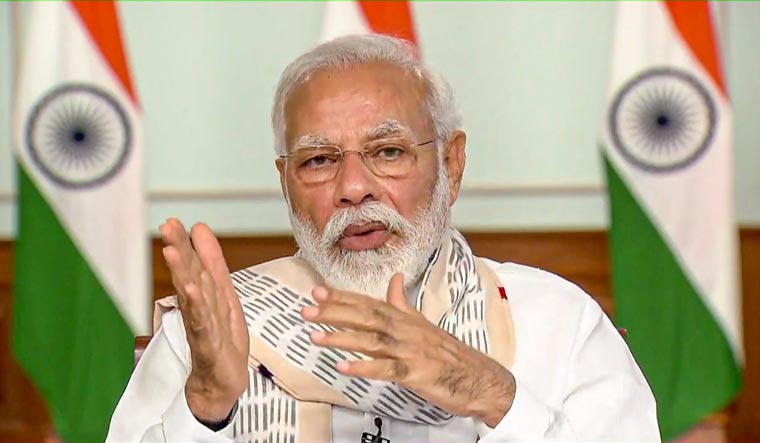 Prime Minister Narendra Modi will launch a focused rural employment programme for the migrants who have returned to their native places following the lockdown. The programme titled Garib Kalyan Rojgar Abhiyaan is a combination of existing government schemes and allocated budget but with a focused objective to provide livelihood to the people for the next four months.

Modi will launch the programme on June 20 in presence of Bihar Chief Minister Nitish Kumar and his deputy Sushil Modi. The Abhiyaan will be launched from Telihar village in Beldaur block of Khagaria district. Chief ministers of five other states, who will be beneficiaries of this focused scheme, will also attend.

The scheme will run for next four months and provide an opportunity for the BJP-led Union government to reach out to the people in Bihar ahead of the assembly elections due in October-November. Home Minister Amit Shah has already addressed a virtual rally in the state as part of the party's programme to highlight the work done by the Modi government in the last one year. Now, the vitual inauguration of the new focused scheme will send a message to the state electorate.

Interestingly, the village chosen for the inauguration of the scheme is in Beladur assembly seat held by the Nitish Kumar's JD(U), while the Khagaria Lok Sabha seat is with another ally, the Lok Jan Shakti party. With one stroke, the BJP has kept all allies in loop. The scheme will cover 32 out of the 38 Bihar districts. As the programme has been titled Garib Kalyan Rojgar Yojna, it will get synchronised with the earlier economic package titled Garib Kalyan Yojna which had a component for the poor.

Moreover, the new terminology will take focus away from the MNREGA, a UPA era scheme, which was increasingly used to provide work to the migrants.

Giving details of the programme, Finance Minister Nirmala Sitharaman said the main aim was to provide livelihoods to the migrants who have returned homes. “We are bringing convergence in all the schemes, front loading the funds so that there is no dearth and tying up schemes for the migrants which will be used for asset creation,” she said. The abhiyan is focused on those districts which have received over 25,000 migrants.

The government has chosen 116 such districts of which maximum 32 are in Bihar, 31 in Uttar Pradesh, 24 in Madhya Pradesh, 22 in Rajasthan, four in Odisha, and three in Jharkhand. Out of these 116, 27 are aspirational districts, a category under the central government for focused development.

In all, 25 works will be covered under this scheme. Among the work which will be covered includes building community sanitation complex, gram panchayat bhawan, national highways works, water conservation, construction of wells, plantations (Campa funds), horticulture, anganwadi centres, rural housing, rural connectivity, railway works, urban mission, laying of fibre cable, and works under jal jeevan mission. These are all works under the existing central government schemes of various ministries, and all have existing provision of budget.

“The idea is to meet the immediate need of the migrant workers at their native places. The whole idea is to get different schemes so that workers are immediately provided with the livelihood for next four months. We are giving clear blueprint to workers. We will then review if they would like to go forward or return,” Sitharaman said, explaining the rationale behind the scheme.

“A comprehensive blueprint has been prepared. Activities which are usually spread over six months to one year, we will front load with money so funds are not a problem, and works are not hampered,” She added.

Asked if providing livelihoods for next four months would prevent people from returning and in turn affect the manufacturing industry, the finance minister said, “It is early to say its impact on manufacturing. Industries are also doing a lot of reset. Many of them reported that they are running upto 40 to 50 per cent strength. As we go along, we will get a better picture.”

“This campaign of 125 days, which will work in mission mode, will involve intensified and focused implementation of 25 different types of works to provide employment to the migrant workers on one hand and create infrastructure in the rural regions of the country on the other hand, with a resource envelope of Rs 50,000 crore,”officials said.

These districts identified for the scheme are estimated to cover about 2/3 of such migrant workers.