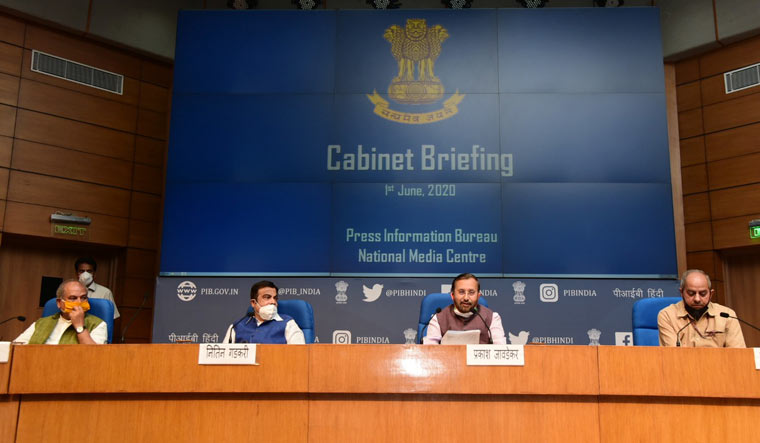 As India enters the first day of ‘Unlock 1’, a meeting of the Union Cabinet was chaired by Prime Minister Narendra Modi on Monday.

Speaking at a press conference after the meeting, Union Minister Narendra Tomar said that the Minimum Support Price (MSP) for 14 kharif crops has been increased by 50-83 per cent to provide relief to farmers.

In addition, farmers will be given more time to repay their loans, with the deadline extended to August.

A micro-credit relief package was announced for street vendors, allowing them to take out loans of up to Rs 10,000. Union Minister for Housing and Urban Affairs Hardeep Singh Puri announced the scheme's name on Twitter: PM SVANidhi.

"Very happy to announce the launch of PM SVANidhi, a special micro-credit facility scheme to enable more than 50 lakh urban/peri-urban & rural street vendors who were vending on or before 24th March 2020 to restart their livelihoods affected due to the lockdown," Puri tweeted.

Applications would be through mobile app and web portals, with "capacity building and digital financial literacy for all stakeholders".

"ULBs will play a pivotal role in the implementation of the scheme under which vendors can avail working capital loan of upto ₹10,000 repayable in monthly instalments. Interest subsidy at 7% per annum will be credited to the accounts of beneficiaries through DBT," Puri tweeted.

The move is expected to benefit at least 50 lakh vendors. The loans would come with a 7 per cent interest subsidy and options for higher loan amounts after the next cycle.

Union Minister Prakash Javadekar, who holds the portfolios for Environment, Forest and Climate Change, Information and Broadcasting, and Heavy Industries and Public Enterprises, also announced that the Cabinet had approved Rs 20,000 crore of subordinate debt for stressed MSME. He said the move would benefit up to two lakh stressed MSMEs.

Union Minister Nitin Gadkari said the Cabinet approved the modalities and road map to implement the MSME relief package, which includes a Rs 20,000 crore package for distressed MSMEs and a Rs 50,000 equity infusion through the Fund of Funds.