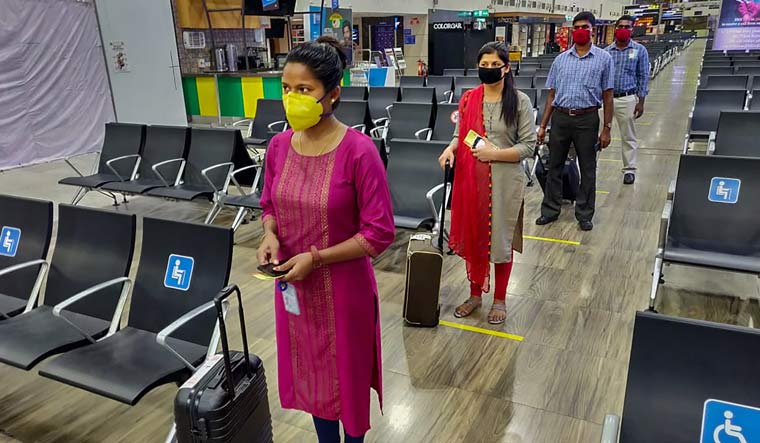 As many as 82 flights to and fro from Delhi airport were cancelled. Reports of more cancellations could emerge as many states have capped the number of incoming and outgoing flights on a daily basis. "We were expecting 32 flights in Guwahati today but only 8 arrived. Many flights were cancelled," Assam Minister Himanta Biswa Sarma was quoted by NDTV.

Many passengers complained that they did not get any prior intimation about the cancellation from either airlines or the government. "Airlines should not cancel flights at this time. It is really important for us to get to our destinations," stranded passengers told news agency ANI.

Passengers of an Air India Bengaluru-Hyderabad flight said their flight has been cancelled, without prior notice from the airline. "Only when our boarding passes were scanned at the airport entry we were told that boarding has been cancelled. We don't know what to do now," ANI news agency quoted a passenger as saying.

The domestic passenger flight operations resumed on Monday after a gap of two months, amid reluctance by various states to open up their airports in view of rising cases of the novel coronavirus.

The first flight took off from Delhi for Pune at 4.45 am under strict regulations recommended by civil aviation authorities. The first flight from Mumbai was to Patna and it departed at 6.45 am.

However, states like Maharashtra, West Bengal and Tamil Nadu, which are home to some of the busiest airports in the country, were reluctant to allow domestic flight services from their airports, citing swelling cases of the coronavirus infection in their states. The West Bengal government did not relent to a request by the civil aviation ministry to allow flight services.

It was decided on Sunday that the state will gradually permit domestic flights from May 28 under strict guidelines. Andhra Pradesh too did not allow any flights on Monday.

Airlines were jittery in resuming services as multiple states have put in place separate norms and conditions for quarantining passengers arriving there by domestic flights.

The government last week announced the resumption of domestic flight services from May 25 under specific rules and guidelines like a cap on ticket pricing, wearing of face masks by passengers, no food served on board planes and making available details of medical conditions by travellers through the Aarogya Setu app or by filling up of a self-declaration form.