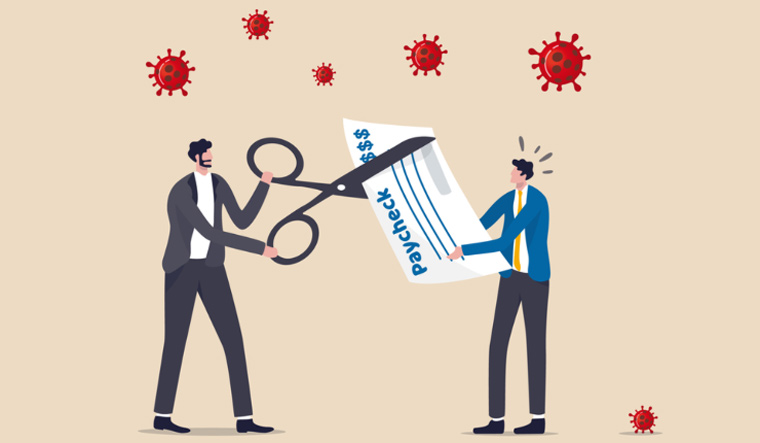 Brand experts are coining new terminologies under the uncertain circumstances triggered by COVID-19 which has resulted in salary cuts and the prospect of layoffs as companies face immense pressure to reduce costs.

Terms such as 'payless jobs' (meaning that that you still have a job on paper, but no pay), 'less pay jobs' (getting a decrement instead of an increment) and being 'benched' (losing your job) are set to be the norm in the coming months.

Why use such terminology? Experts say that when markets, consumers or a crisis change or disrupt the market flow, it becomes important for every stakeholder to understand the context, need and the expected outcomes with a fresh perspective.

“When markets, consumers or a crisis change or disrupt the market flow, it becomes important for every stakeholder to understand the context, need and the expected outcomes with a fresh perspective. New terminologies are not to be viewed as old wine in a new bottle; it’s about understanding and strategizing action plans to address the change in the market with a fresh perspective. Most popular and effective jargons and terminologies are always simple to relate to, easy to understand, highly malleable to adapt and most importantly, leads an organisation or the ecosystem to put it into practice,” Padaki told THE WEEK.

Experts say that for instance bench is terminology not only restricted to the IT sector but can be viewed for other sectors as well. The term benched employee now belongs not only to the IT sector, but to aviation, retail and more. Though the bench simply means that you still have a job on paper, but no pay. At the same time we have grown up with terminologies such as 'Jobless Growth' but new terms are being used such as 'Payless Jobs', Jobs on paper etc. At the same time several industries are in deep turmoil and there are talks about zero increment, the next term is a decrement. Then there is also leave without pay till it is business as usual. Payless jobs means that employees still hold jobs on paper but get no salary. Many of these terminologies will be used in the future,” said Bijoor.

Experts say that today's condition is very uncertain and in these given circumstances companies feel that employees cannot be associated with them on a full-time basis; thus leading many to use terms such as 'payless jobs' and 'jobs on paper'.

“Terminologies such as payless jobs or jobs on paper can be used for people who are on a contractual engagement with an organisation and are on their rolls without pay. These can be called as and when required. They can be associated with an organisation and I feel that rather than firing such people an organisation can be associated with them in this form. Such employees are ready for a payless job or jobs on paper in the future. This will be a trend in the next six months,” remarked Rajiv M. Ranjan, CMD of PaisaDukan.com.

Branding experts agree that in the times to come, many more new jargons and terms will gain in popularity and that is what is expected.

“Companies are under severe stress and one of their main targets for cost reduction is a reduction in manpower. Different strategies are being used like classification of employees differently within the same company—transferring to a temporary staff company, salary cuts etc. Different strategies will keep coming. But, sensitivity and empathy are gold today in these stress-ridden times,” said Sridhar Ramanujam, founder and CEO of Brand-Comm PR.