'Housing for All' to be ready two years ahead of deadline: Minister 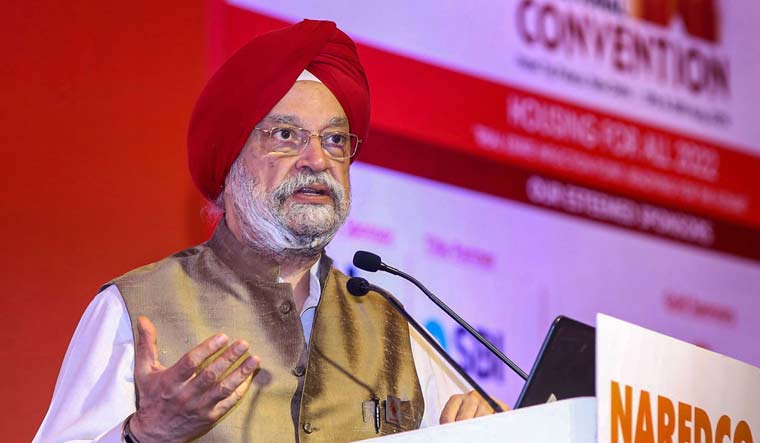 Minister of State for Housing and Urban Affairs Hardeep Singh Puri addresses the 15th National Convention on 'Housing for All 2022', organised by NAREDCO, in New Delhi | PTI

Prime Minister Narendra Modi's vision of 'housing for all' would be completed much ahead of its 2022 deadline, announced Minister of State for Housing and Urban Affairs Hardeep Singh Puri on Tuesday. He was addressing a convention on real estate and housing in New Delhi.

Puri noted that the target of a pucca home with a kitchen and toilet for every family should actually be met by next year itself, two years ahead of deadline. He said by December, one crore such homes would be ready, and by March 2020, another one crore and 12 lakh should be ready.

The minister spoke about the convergence of the Swachch Bharat Abhiyan with the 'Housing for All' scheme, and said that more than the physical construction of toilets, the mindset change that had come about in the last five years was the bigger gain. He said that the ministry was now moving beyond the Open Defecation Free (ODF) targets to ODF+ and ODF ++ rankings.

Puri stressed on the importance of using new technologies and new building materials, pointing out that 40 per cent of the carbon emissions in cities was from the toxicity of buildings. He also stressed the need to reduce carbon footprint in construction by developing and embracing green technology.

Speaking about the progress of the Smart City project, another pet mission of Modi, Puri said that by the year end, 50 of the 100 cities that had been selected would roll out their smart solutions. As per the project, each of the selected cities had to introduce a “smartness” in two projects—one a small one, the other a large one encompassing several utilities. New Delhi Municipal Corporation, for instance, decided to make the electric billing smart, with electronic metres, and app based facilities of monitoring the amount and pattern of consumption, as well as payments. He pointed out that under Modi's first term, the allocation of funds for urban rejuvenation was Rs 960,000 crores, six times more than what the UPA government spent in its two tenures combined.

Puri said that as per a report, India would need to spend 1.3 trillion dollars by 2030 on meeting the demand of infrastructure alone. “Seventy per cent of India's infra demands by 2030 is yet to be built, but much of that will be redevelopment,'' he said, highlighting the opportunities that would unfold in the real estate sector. Speaking of the prime minister's vision to embrace urbanisation, Puri noted that India was confident that it would be able to meet the United Nations' 2030 sustainable development goals well before the deadline.