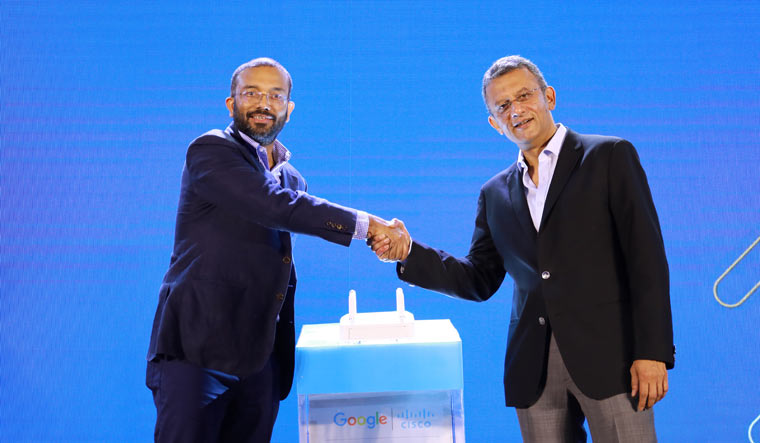 The US-headquartered technology company, Cisco, has partnered with Google’s gStation platform to provide Wi-Fi zones across India. The aim is to connect over 800 million Indians who are yet to embrace the internet.

As part of the roll-out, the pilot project has already begun in Bengaluru. It is expected that by September 2019, 200 locations in Bengaluru will be Wi-Fi enabled, followed by another 300 in the next few months. The Wi-Fi zones will be spread across public locations in the IT city, including bus stops, hospitals and government offices. This will be the first-of-its-kind tie-up of Cisco with Google Station anywhere in the world. The announcement was made on the side lines of the Cisco India Summit in Kochi, Kerala.

“India will be the first country to go live globally with such tie-up of Cisco with Google Station. Across the world, there is this 3.5 billion population that is not on the internet and there are 2.5 billion people who live in the age of 3/4G network but do not use the internet. The broader aim is to bring this population in the fold of the internet and the beginning has been made from India. I feel that the success of digitisation is closely linked to high speed internet access. The demand for public Wi-Fi hotspots is expected to go up by 100 times over the next three years and this will be a huge growth opportunity for Cisco,” remarked Sameer Garde, president, Cisco India and SAARC.

It is expected that by 2025, there would be around 1.75 billion internet users across the globe and majority of them will be in the Asia-Pacific region. “Next generation of internet users will be mobile-only users. However, globally, there is a challenge as the smart phone prices are still high, and the average selling price of a smart phone is around Rs 11,000 in India for instance. Besides, the lack of storage is still a major frustration among mobile users and the web is till mainly dominated by the English language. There is a huge requirement of localisation and the local language content. Many users also do not try new apps because of mobile data constraints,” observed Sajith Sivanandan, managing director and business head, Google Pay and Next Billion User Initiatives, India.

Sivanandan further pointed out that Google Station has tied up with RailTel Corporation of India to provide high speed internet Wi-Fi across 400 railway stations in India. The company has also tied up with BSNL for free Wi-Fi services. “I am excited by the opportunity of this tie-up. Our business depends on trust and security and our public Wi-Fi zones are highly secure as we are using the same https environment for our network which even banks and financial institutions use for their financial transactions,” he added.

According to a TRAI report, globally, there is one Wi-Fi hotspot for every 150 people, and in India, eight million additional hotspots must be installed to achieve the same ratio, creating new market opportunities for infrastructure providers and internet service providers. Market sources point out that India has only 52,000 Wi-Fi hotspots today when compared to 9.8 million in the US and 13 million in France. Hence, a lot needs to be done to increase the number of Wi-Fi hotspots in the country.

Experts at Cisco feel that public Wi-Fi will provide an opportunity to develop a broader connectivity ecosystem, which will not only benefit users and wireless Internet Service Providers (ISPs) but also telecom service providers, handset manufacturers, and venue owners. According to the company, public Wi-Fi is already seeing widespread acceptance by service providers globally and has evolved as a complementary network for traffic offload purposes—offloading from congested cellular networks on to lower-cost-per-bit Wi-Fi networks and extending the coverage of mobile networks within buildings and other public spots like cafes and restaurants, retail chains, hotels, airports, planes and trains for customers and guests.

As per the Cisco VNI report, nearly 59 per cent of internet traffic will be offloaded from cellular networks to Wi-Fi by 2022, paving the way for a huge opportunity.