Three things to get to $5-trn economy—investments, behaviour and clearing legal jams 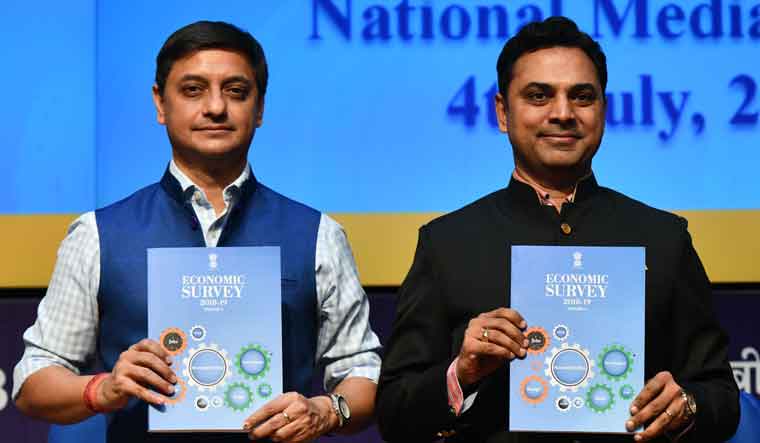 If Prime Minister Narendra Modi wants to touch the bright blue sky in terms of transforming India into a $5-trillion economy by 2024-25, the blue Economic Survey 2018-19 tabled in Parliament on Wednesday will help him. It comes with the blueprint and tactical tools to shift gears to grow at 8 per cent GDP continuously and actually achieve that goal. Apparently, what we really need to get there are three things: investments, people's behaviour, and clearing the legal jam.

Chief Economic Adviser K.V. Subramanian, who prepared his first Economic Survey, said the colour, to him, represented unfettered thinking as he looks to put the country in a “virtuous cycle”. “Investment, whether from FDI or domestic savings, is the key driver and exports is the goal,” he said during his presentation.

If India's current domestic savings of 29.4 per cent of GDP goes up by even 5 per cent on a constant basis, investment as a percentage of GDP will increase, leading to manufacturing, jobs and exports. His team had seen the evidence of this “virtuous cycle” in the China growth story, and indeed, it was investments that led to high growth rate in economies in East Asia, too.

As investments grow, and GDP grows, consumption will decline, he said, flagging what according to Principal Economic Adviser Sanjiv Sanyal was what they wanted—not domestic consumption but exports.

Subramanian and his team have relied on “behavioural economics for path-breaking changes”, making a significant departure from the traditional economics of equilibrium of economics of silos. Classic economics, he elaborated, equates people with robots, while this was about leveraging the behavioural economics of “nudge”, for example the ideas of “Swachh Bharat” or “Beti Bachao Beti Padhao” schemes. The former had resulted in improved health outcomes, among other things, and the latter had brought about a dramatic drop in the sex ratio. If, upon government's asking, many gave up subsidy on LPG cylinders, behavioural economics suggests people would start thinking if they really need subsidies?

While a strong injection of investment was what the Economic Survey saw as the panacea for much of the ills of the MSMEs, its prescription included incentivising infant firms rather than small firms, having a sunset clause for incentives with grandfathering, focus on infant firms in employment intensive sectors and the service sector.

The Economic Survey has a favourable take on data, saying  it is a public good, whose marginal cost had dropped a lot and marginal benefits increased very significantly. The CEA preferred not to comment on the GDP figure controversy following his predecessor Dr Arvind Subramanian's research finding that showed the GDP about 2.5 per cent lower than what the government believes it is. "A lot has already been written about it", he said.

And as the country celebrates the 150th birth anniversary of Mahatma Gandhi, Subramanian said they had been inspired by the talisman he gave with reference to the poorest man. And so it is that the survey in two volumes includes, for the first time, an abstract and a “chapter at a glance”, apart from a two-minute video in Hindi and English—to be intelligible to all.

But the most important step towards making India a $5-trillion economy by 2024-25, according to the Economic Survey, is clearing the legal jam. And the survey says it is neither difficult nor costly. In the district and subordinate courts, an additional 2,279 judges will result in 100 per cent clearance, zero per cent backlog and 25 per cent increase in productivity in five years.