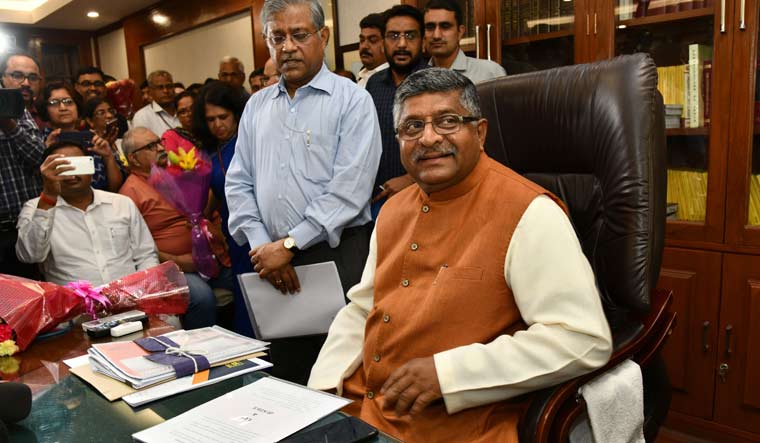 Alongside initiating a 5G auction, the government this time would pay more attention towards rejuvenating the two major telecom PSUs, BSNL and MTNL, telecom minister Ravi Shankar Prasad said after taking charge of the ministry on Monday.

More than two lakh employees of the two telecom majors had engaged in long drawn protests with the Modi government in the last term, alleging that the government was neglecting the PSUs and favouring bestowing 4G spectrum on private players like Reliance Jio instead.

Following those protests by telecom employee unions, the government had recently agreed to allocate 4G spectrum to BSNL and MTNL subscribers. It had also promised to address the pension-related grievances of employees and officers in these two PSUs.

“We will also take steps for revival of Bharat Sanchar Nigam Ltd and Mahanagar Telephone Nigam Ltd as the government believes that in order to maintain sober equilibrium in the industry, public sector must be present and it is in the nation’s interest that they remain healthy," Prasad said on Monday, echoing views expressed by employee unions earlier.

Asked if the government is keen to see a merger between these two telecom PSUs, Prasad said that the clarity on that would evolve going ahead. "I do not want to comment on media speculations (about a merger of BSNL and MTNL). All I can say is that these are complex business issues and the government will weigh all options before coming to any conclusion," Prasad said.

The minister also highlighted that the government would focus largely on the quality of services offered by mobile telecom service providers in the country. "We will see to it that mobile quality of service does improve very soon," Prasad promised.

To a question on whether 4G spectrum could be made available to BSNL and MTNL at lower than TRAI specified rates, Prasad said, "Many things are possible but we will have to see how to do it. I have just taken charge as telecom minister today. Give me some time," Prasad told reporters during an interaction at the ministry.