Spicejet, IndiGo gain big from Jet's absence, but no benefit to flyers

High flying costs unlikely to come down till July, thanks to other adverse factors 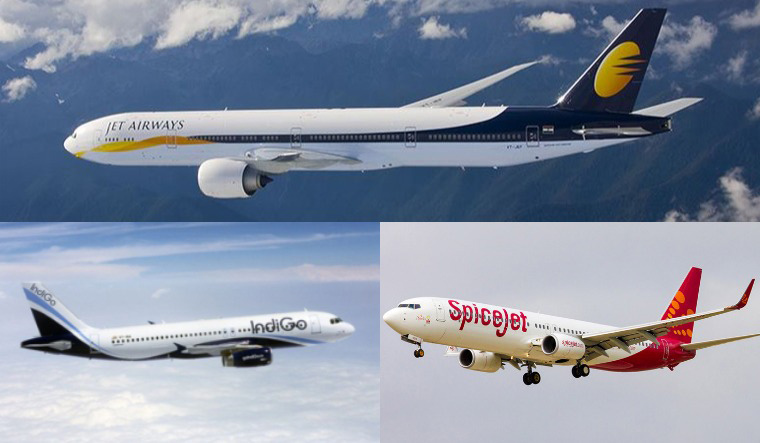 The idiom 'one man's loss is another's gain' holds true for India's airline industry as well. Heading out of the cruellest month that April was for India's aviation industry, carriers like SpiceJet and IndiGo have stepped on the accelerator, albeit primarily by taking advantage of the misery of fellow airlines Jet Airways.

Weighed down by crushing debt and with banks refusing to lend it more money, Jet Airways suspended all flights by mid-April. That meant 16 per cent of flights in India that Jet Airways (along with Jet Lite) accounted for were wiped off the air traffic map on the night of April 17. Meanwhile, IndiGo and SpiceJet removed A320neo and Boeing 737 Max aircraft from its service. Many airliners, including IndiGo, GoAir and Air India, were not running its full fleet strength owing to repairs or pilot shortage.

Additional factors such as high taxes on aviation fuel, and the closing of Pakistan's airspace for international flights after Balakot airstrike also rounded up the litany of woes that plagued the sector. All these factors combined fanned the already spiralling air fares.

A couple of simple statistics bears this out. Domestic air travel growth in the first few months of this year was less than five per cent, compared to 24 per cent last year. At Mumbai airport, the suspension of Jet Airways as well as reduction of flights by other operators saw the number of daily passengers fall from 1.3 lakh to 95,000 last month.

But now, things seem to be looking up, at least for airline traffic, if not for the passengers. Market leader Indigo as well as Spicejet have gone on an aggressive expansion, cannibalising on Jet's pricey slots of major airports, and even leasing some of the aircraft used by it and abandoned on the tarmac waiting for lessors to take them back.

SpiceJet  has been the most aggressive, adding about 124 new flights to its roster since the beginning of this year. This is without including those from the UDAN scheme. SpiceJet had won 36 new routes in the new set of UDAN flights announced by the government in January. In fact, on April 23, just a few days after Jet announced suspension of all flights, SpiceJet launched 23 new services on the Mumbai-Delhi route, the nation's busiest and most profitable. On Monday, it announced the acquisition of its 100th airplane. According to its spokesperson, “The airline has been consistently working to introduce new flights and frequencies to restore normalcy.”

Market leader Indigo, too, wasn't too far behind to reap the benefit of Jet Airways's crash and burn. It launched around 44 new domestic flights in April—18 of them on the Mumbai-Delhi route was announced the day Jet Airways shut down. To make up for the acute shortfall felt at Jet's erstwhile hub Mumbai, Indigo, which operated out of Terminal 1, even moved into Terminal 2 where the former used to function. Besides a healthy move up for its share price, Indigo's capacity market share, currently at 45 per cent, is expected to cross the 50 per cent-mark as early as the end of this quarter, ie., by June.

It is to be noted that even as Jet Airways was cutting flights dramatically in the January-March period this year, Indigo's number of passengers went up by around 20 lakh compared to the corresponding period.

In fact, all airlines had vied for the slots and planes left behind by Jet Airways, though the biggest benefactor seem to be Ajay Singh's SpiceJet. The Directorate General of Civil Aviation (DGCA) had alloted the highest—130 of Jet's slots—to SpiceJet, while Indigo got only 120. About 20 of Jet's planes were also handed over to SpiceJet, helping it ramp up operations dramatically over the past few weeks.

While it may still take time to achieve growth rates matching those from previous years, the sudden ramping up of operations seem to have stabilised the market for the time being. However, passengers might not have enough reasons to cheer yet. Market estimates say while air fares may have come down from the 40-100 per cent levels seen in March, they would still generally command a premium over the budget dirt-cheap options seen earlier, at least till July.

For that to happen, more changes are required such as cheaper ATF triggered by a general fall in oil prices, reduction of aviation fuel taxation by the government and the lifting of the ban on Boeing 737 Max that is likely to happen later in the year.