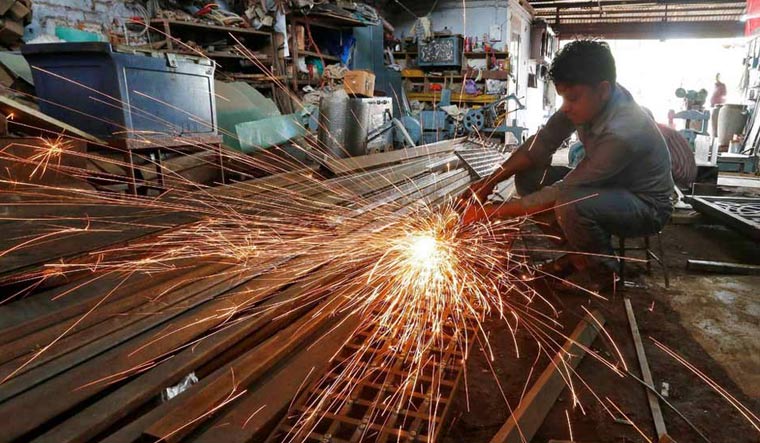 India's economy is projected to grow at 7.1 per cent in fiscal year 2020 on the back of strong domestic consumption and investment, but the GDP growth is a downward revision from the 7.4 per cent estimated in January this year, according to a report by the United Nations.

The World Economic Situation and Prospects (WESP) 2019 Mid-year Update, released on Tuesday, said that the Indian economy, which generates two-thirds of the regional output in South Asia, expanded by 7.2 per cent in 2018.

"Strong domestic consumption and investment will continue to support growth, which is projected at 7.0 per cent in 2019 and 7.1 per cent in 2020," the report said.

The estimates for India, however, reflect a downward revision from the projections made in the World Economic Situation and Prospects 2019 report released in January this year. That report had estimated that India would grow at 7.6 per cent in fiscal year 2019 and 7.4 per cent in 2020. It must be noted that despite the downward revisions, India remains the fastest-growing major economy in the world, ahead of China.

Dawn Holland, the chief of the Global Economic Monitoring Branch at the UN Department of Economic and Social Affairs (DESA), said India should focus on increasing private sector involvement in investment as she underlined that the impact of demonetisation on the country's economic growth passed through "relatively quickly" and there is no longer a "hangover" from the reform on the country's current growth prospects.

"The one area I think India should be focusing on is increasing the private sector involvement in investment and facilitating access to finance for the private sector and small and medium-size firms in particular, which is a barrier to faster growth in India," she said in response to a question by PTI on factors needed to bolster India's economic growth going forward.

On any lingering impacts of demonetisation on India's growth, which has been revised downward, Holland said, "we see the demonetisation had a significant impact when it was initially introduced, but that seems to have passed through relatively quickly. I would not say there is a very large hangover from that" in the current economic scenario.

With India projected to grow at 7 per cent in 2019 and 7.1 per cent in 2020, Holland said compared with the global growth of 2.7 per cent, India's economic growth "obviously stands out" as among the very high rates of growth in the world.

On the reasons behind the downward revision in India's GDP growth, she said, "consumption and investment are continuing to support the economy, so it is probably some effects—even though India is not as deeply integrated into the impacted global supply chains—it is integrated into the world economy and so any dramatic slowdown in world trade, like we have seen, will necessarily have had at least some impact on the (Indian) economy."

The WESP Mid-Year Update noted that growth projections for 2019 have been revised downward in all major developed economies. The growth outlook for many developing economies has also weakened, the report said, adding that despite downward revisions, growth in India remains "strong" amid robust domestic demand.

"The global growth outlook has weakened amid unresolved trade tensions and elevated international policy uncertainty. Across both developed and developing countries, growth projections for 2019 have been downgraded. Alongside a slowdown in international trade, business sentiments have deteriorated, casting a cloud on investment prospects,” the report said.

World gross product growth is now expected to moderate from 3.0 per cent in 2018 to 2.7 per cent in 2019 and 2.9 per cent in 2020, reflecting a downward revision from the WESP 2019 forecast released in January. In tandem with slowing industrial production, international trade activity has visibly weakened, reflecting in part unresolved trade disputes between the US and China.

South Asia remains on a strong growth path, even as forecasts have been revised downward. However, across the region, output continues to be constrained by infrastructure bottlenecks.

The report added that India's exports remain more robust, as around half of exports are destined for faster-growing Asian markets, while geopolitical risks continue to confront Afghanistan and Iran.

The slowdown in global economic activity has triggered a shift towards easier monetary policy stances across many developed and developing economies, it said, adding that this shift is taking place in an environment of subdued global inflation, amid weakening demand and a moderate outlook for global commodity prices.

The report projects that with major downside risks prevailing, there is a significant possibility of a sharper slowdown or more prolonged weakness in the global economy that could impact development progress.

"A further escalation of trade disputes among the world's largest economies poses a significant risk for both short- and medium-term global growth prospects," the report said.