GST: A story of missed targets and inconsistent performance 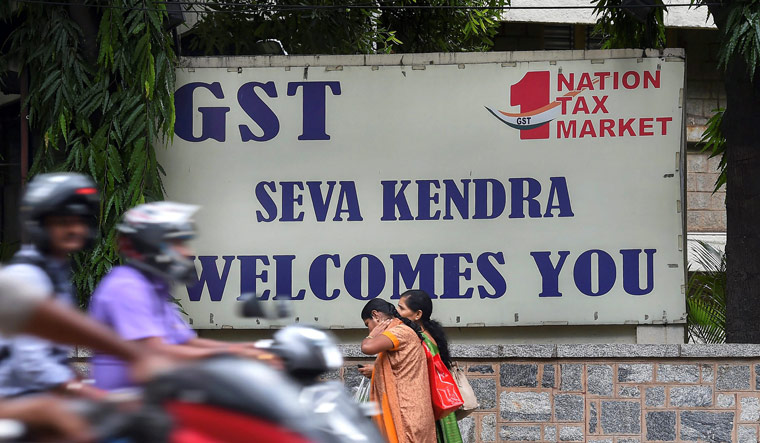 It was years in the making, but the Goods and Services Tax finally saw its day on the midnight of July 1, 2017. The one nation-one tax, which usurped most of the prevailing indirect taxes, was touted to be a game changer, bring in more compliance by simplifying tax filing for traders and businesses, bring the country under a unified tax regime and in turn boost revenue and the wider economy.

But 18-months on, it is still a work in progress. Problems ranging from compliance to tax evasion to multiple tax slabs and delayed refunds have continued to plague the system. More importantly, key goods like petroleum products still remain outside of the ambit of GST.

In the backdrop of the problems, the government has continued to miss the GST collection targets and that in turn has cast a shadow on the the fiscal deficit projections for the full year.

The average of Rs 96,700 crore monthly GST collections this year is much lower than the Rs 1.12 lakh crore that was estimated in the budget.

The shortfall in GST collections come at a time the Centre’s fiscal deficit is already under pressure. In the first eight months of the current year, the fiscal deficit had already exceeded 114 per cent of the budgeted target.

The lower GST collections now threaten to derail the government’s fiscal deficit target of 3.3 per cent, unless it cuts its spending in the coming months or finds alternative avenues to boost revenue.

“With GST revenues continuing to remain well below budgeted targets, it will be difficult for the central government to meet its GFD/GDP(gross fiscal deficit per gross domestic product) target of 3.3 per cent without expenditure cuts,” feels Suvodeep Rakshit, senior economist at Kotak Institutional Equities.

Rakshit estimates a likely shortfall of around Rs 1 lakh crore this fiscal year, and sees fiscal deficit at 3.5 per cent, including expenditure cuts in the fourth quarter (Jan-March).

According to Devendra Pant, chief economist and head of public finance at India Ratings and Research,the slippage in the central government’s fiscal deficit in the current financial year is likely to be around Rs 39,900 crore.

“Fiscal deficit in FY19 is estimated to be Rs 6.67 lakh crore as against the budgeted Rs 6.24 lakh crore. This translates into fiscal deficit/GDP of 3.5 per cent for FY19 compared to the budgeted estimate of 3.3 per cent,” said Pant.

This will be the third consecutive year, the fiscal deficit will be at 3.5 per cent, he added.

The reasons behind the lower GST collections are many. Evasion is among the reason.

Shiv Pratap Shukla, minister of state for finance, told the Lok Sabha on January 4 that 28.75 per cent of the tax payers did not file their returns in November 2018. That figure was just 10.56 per cent in November 2017.

Complex and multiple tax slabs have also been cited as another key reason, and there has been rising demand for the government to streamline it.

The government has been looking to plug the loopholes and iron out the bottlenecks in regular meetings of the GST council, which is headed by the finance minister.

Till the 30th GST council meeting, 918 decisions were taken and 294 notifications issued, according to Shukla.

“The 28 per cent slab is now a dying slab,” said Jaitley.

In the 32nd GST council meeting on January 10, the GST exemption limit was doubled to Rs 40 lakh from Rs 20 lakh in a move aimed to give relief to micro, small and medium enterprises. Effective April 1, tax payers with an aggregate turnover of Rs 40 lakh will now be exempted from filing GST returns. That exemption will be Rs 20 lakh for the north eastern states.

Additionally, now SMEs with an annual turnover of Rs 1.5 crore (versus current limit of Rs 1 crore) will now be able to opt for the composition scheme, where by they will only pay a one per cent tax.

Also, in what would be good news for service providers, like architects, interior decorators and freelance consultants, among many others with an annual turnover of up to Rs 50 lakh, it was decided that they would now be eligible to opt for the GST composition scheme and pay tax at a lower 6 per cent rate.

All these measures introduced are expected to reduce the compliance burden on the small firms and traders, who were impacted a lot by demonetisation. In turn, it is expected that over time their tax compliance will also go up, with things being simplified.

However, the reduction in number of registered tax payers and lowering rates may also hurt GST collections. There are other issues, too.

“The collections will be marginally impacted by increasing the limit for composition dealers and increasing the threshhold exemption. However, the value chain will break if SMEs doing B2B business choose to de-register. It needs to be seen if trade will procure goods or services from unregistered vendors as the cost for the same will be on higher side,” said Parag Mehta, partner of NA Shah Associates.

Beyond compliance though, the government will have to strengthen its mechanisms to detect and stop frauds, which are also causing a huge hole in GST.

Earlier this month, a fake billing scam was unearthed in Ahmedabad where bogus invoices were generated to fraudulently avail input tax credit. Similar cases have been reported in the past from other states, too.

The most common practice is that a seller of a product doesn’t issue an invoice at all, thus bypassing GST all together. Other modus operandi, say tax experts is that fake invoices are issued to avail input tax credits, without actually selling any product.

Shukla informed Parliament last week that investigation in 3,626 cases of GST evasion/violation had been initiated in the current financial year alone.

“On the basis of investigation conducted so far, it emerges that the amount of tax involved in the 3,626 evasion/violations cases is estimated to be Rs 15,278.18 crore(up to December, 2018). An amount of Rs 9,959.29 crore has been recovered out of total detection amount in the present financial year,” he said.

Bagri of Dhruva Advisors said there must be emphasis on monitoring compliance through e-way bill mechanism, allowing input tax credit only when the supplier uploads the invoice which would ensure that the credit is given only after the tax has been paid among other things.

Mehta also feels that anti-tax evasion measures can be strengthened by using analytical data tools from the returns filed.

Furthermore, tax administration is currently based on self-declaration by the taxpayer and hence, tax liability is accepted at face value, which may be needed to be relooked at.

Meanwhile, experts have also called for subsuming stamp duty in the GST and brining petroleum products under the tax regime to boost collections. Collections can also be increased by rationalising rates on sectors like cement and construction, which would boost sales, said Mehta.