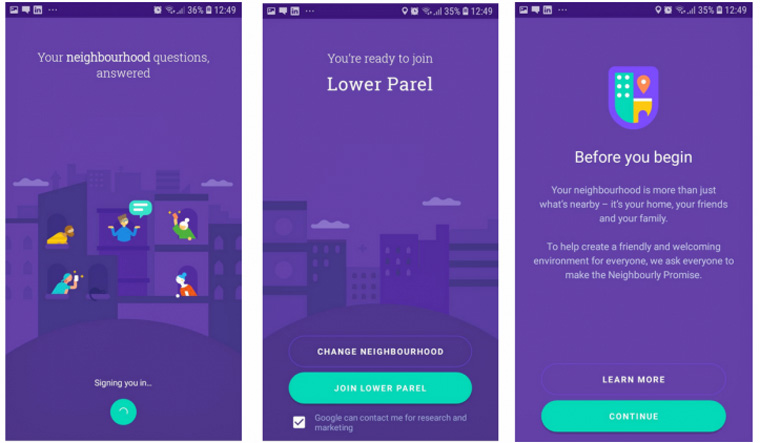 The hyperlocalised app, Neighbourly, was first launched in Mumbai | Google

We are all used to gathering information related to our locality from our neighbours such as the quality of the new book shop in the neighbourhood, about the new restaurant or about the best tuition centre around. Feedback from the neighbours is something that we take seriously and it is often our first point of reference. Considering all these preferences, Google has designed an app exclusively made for India called Neighbourly, and is quite bullish about the concept of getting regular feedback and updates from neighbours.

The app had a soft launch in Mumbai followed by Jaipur, Ahmedabad, Mysore, Vizag, Kochi and Coimbatore. The company claims that it has witnessed over 1.5 million downloads ever since it had a soft launch. It is now planning to launch it across the country. The app has already been launched in Bengaluru and will be launched in Delhi soon.

“The aim is to connect useful and variety of information about the neighbourhood through the Neighbourly app. It could be anything related to the neighbourhood, such as timely information about festivals, any tutors available, in case of rain is the neighbouring roads flooded etc. At the same time, we have ensured that the app notifies the right people and gets you the required information fast. We have also ensured the privacy of an individual who is downloading the app. The person does not have to share their location or phone number and it is not compulsory to share their picture. Even if one shares their picture it cannot be altered or zoomed in or downloaded. It took us a lot of field research to design the app and we also took user feedback and added more features to it,” Ben Fohner, senior product manager at Google, told THE WEEK.

Gradually, Google is planning to add more cities to this app in the next few weeks including Chennai, Hyderabad, Pune, Kolkata, Chandigarh, Lucknow and Indore. The app currently supports eight Indian languages. The company also says that every time a user opens the app they see the best questions from their respective neighbourhood. “The more you use Neighbourly, the more personalised it becomes. If you ask a question that is unlikely to get an answer from your neighbours, you will receive a notification with some advice on how to best ask them again. If you are among the most helpful in your neighbourhood, you can earn the Top Neighbour status. Top Neighbours help pick the best questions in ones neighbourhood and also identify the ones that don’t meet the 'Neighbourly Promise',” remarked Fohner.