Speaks about the Murthy household, her granddaughters and more 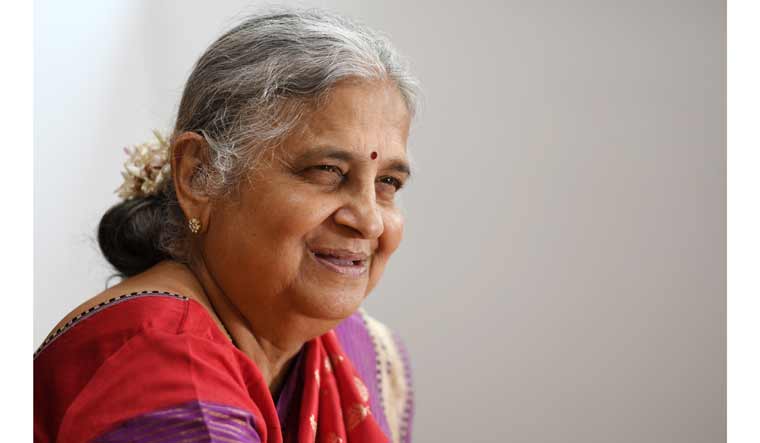 Children's author and Infosys Foundation chairperson Sudha Murthy is loved for her stories that pack in humour and life lessons. In the best-selling children's book series The Gopi Diaries, she engages children with stories told through the eyes of a dog named Gopi.

Speaking to THE WEEK on the sidelines of the Kerala Literature Festival, she shared about her dog Gopi, on whom the three books are based, life with her grandchildren and more.

Please tell us about your book series that features your dog Gopi? How did you decide to write a children’s book based on your experiences with Gopi?

Harper Collins approached me and asked if I could write something. I said I do not have any ideas right now. I do not commit to anything until I have ideas. When this meeting was going on, my dog, Gopi, came in. He [the publisher] suggested I write on Gopi. I said there are many books on dogs in the market. But they said, 'no you write something'. After they left, I thought a dog owner may write about how cute his/her dog is and things like that. But what does a dog think of its owner? That is how Gopi became the narrator. And I became Ajji to Gopi. In Kannada, ‘Ajji’ means grandmother.

Gopi came to me through my son Rohan who brought and left him in my house. Rohan went for a week to London, but could not return due to the pandemic. So then, Gopi became mine. Gopi [in the book] sees Rohan as his father, Mr [Narayana] Murthy as Ajja and I am his Ajji. I started to think what Gopi would be thinking: ‘Oh this is my new home. When I talk, they call it barking and I pull Ajji’s pallu’. Through Gopi, I wrote the first book— Coming Home—about what it meant for a pup to leave his mother and adjust to a human home. And it became very popular among children. The books feature instances like Gopi going to the doctor, or getting scared. I wrote the whole book in just three and a half hours. More than one lakh copies were sold. Then I wrote part two. So all these stories [told through Gopi’s eyes] are real stories.

I have heard Narayana Murthy is very scared of dogs.

Yes. Because when he was a kid, he was bitten by a dog. So, he used to say: 'No dogs at home'. For 40 years, I did not get a dog even though I was very fond of them. In my childhood, we always had dogs. We had a Rajah for 14 years, then a Julie for 13 years. But Mr Murthy set a condition—no dogs at home.

A part of… because he was damn scared of dogs. He said if I kept a dog, he would be uncomfortable throughout the day. I said, ‘Fine’. In marriage, we have to adjust. But when Rohan got this dog, Murthy changed over a period of time. First, he used to stay in another room. Initially, he thought the dog would be at our home only for a week, and it will then go back to Rohan’s. But Rohan went to London and did not come back for eight months. So, Gopi stayed in our house all that time. And even after his father [Rohan] came, he did not go home; rather he stayed at my house. So, when Murthy realised that Gopi will be with me for a long time, he started staying in the same room—Gopi at one end and Murthy at the other.

Slowly he realised that not every dog will bite you. Gopi is like a child and Murthy developed a friendship with him. I realised that in the last one and half years, he [reached a stage where] he will not live without Gopi. So, that is the basis of my second book, Finding Love, [in the series]. The third book, Growing Up [was released recently]. In this, Gopi has grown up now. He is a big dog. All the female dogs look at him and he selects [his pair]. He goes swimming. While swimming he meets his lady love. How he wants to impress her, how they go together, how Ajji tries to neglect that, and how he becomes a father. But he does not know how to raise a pup. And then Ajji tells him that he was also once a pup.

What are the kind of ideas you explore through your books for children?

See, if it is children, and you tell them they should tell the truth and be honest, they may think it is a moral science class. So, you convert these into a story. You show two characters, one who is honest and another who is dishonest. And you tell a story in which the dishonest person is punished at the end. So the moral is told. That is the way I convert the moral into the form of a story so that children will unknowingly get the idea. In Gopi’s story also I have given some small morals. For instance, I have explored the theme of ‘sharing is caring’ in Gopi’s story.

Your son-in-law Rishi Sunak is the Prime Minister of the UK. So, how often do you get to talk to your grandchildren?

Well, I go to England twice or thrice a year. They come once a year. I do spend time with them. I write chapter books also and my granddaughter, Anushka Sunak, converted those and choreographed it into a Kuchipudi dance. I also discuss history in many of my books. My eldest granddaughter, Krishna, loves history and keeps insisting she wants to visit Indian historic places. I talk to them about language, culture and love for the country. And I tell them a lot of stories.

You have said earlier you wanted to bring up your children to know the value of money. You never wanted them to have an extravagant life. Recently, when Mr Sunak was running for elections, there were allegations that your daughter Akshata Murthy has not taken UK citizenship in order to evade taxes. The Indian media also reported the same. How did you deal with such allegations?