“There is no one saviour of journalism”: 'While We Watched' director Vinay Shukla 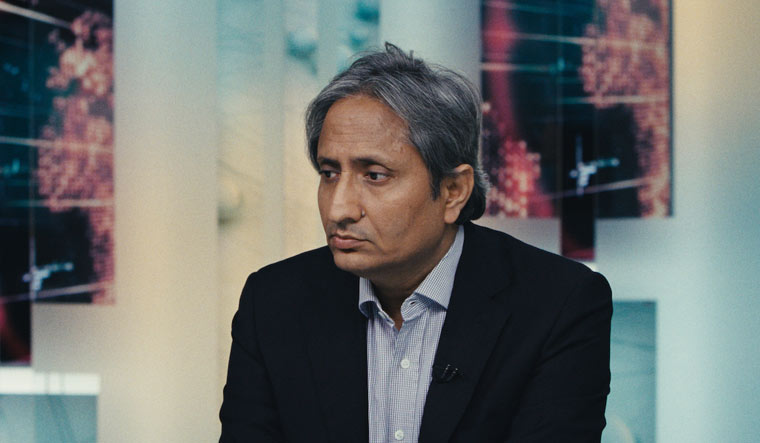 The 2016 documentary, 'An Insignificant Man', tracked the spectacular political debut of Aam Aadmi Party leader Arvind Kejriwal like a thriller. It released in theatres after winning a difficult censorship battle and ran successfully for nine weeks straight, an unheard-of achievement for a documentary in India where the format still struggles to find a theatrical release.

The docu-feature first premiered at the Toronto International Film Festival to a standing ovation. The makers of 'The Insignificant Man' are back with yet another suspenseful drama - a TV newsroom thriller. 'While We Watched', featuring Ravish Kumar, won the ‘Amplify Voices Award' at the Toronto International Film Festival where it had its world premiere last week. Titled ‘Namaskar! Main Ravish Kumar’ in Hindi, 'While We Watched' intimately chronicles the working days of a broadcast journalist as he navigates a spiralling world of truth and disinformation. In a phone conversation with THE WEEK, director Vinay Shukla (who co-directed 'An Insignificant Man' with Khushboo Ranka) talks about how his second documentary is essential viewing for anyone who cares about journalism or their news consumption. And why there is no one saviour for the profession. Edited excerpts.

Q/ How did you convince Ravish Kumar to get on board this project? And, how difficult was it to gain access into a major newsroom and be a fly-on-the-wall for two years?

A/ It was an organic process. I have always been a fan of newsroom dramas. But when I watch the news today, it makes me angry. I feel lonely and isolated. My friends all over the world have stopped watching the news because they say it's not good for their mental health. The news is a major source of public information. It is supposed to make our lives better and yet we were cutting ourselves off from it. And I began to wonder if the people making the news are going through the same sense of isolation. Ravish is very different compared to other news broadcast people we know. Firstly, he speaks in Hindi and commands a huge audience. He does a 40-minute piece to camera while everyone else is filling up their slots with panel discussions with four to 15 guests. In his monologue, he's doesn't make claims that this is the number one debate in the country right now. What I found interesting was how he seemed like a tired hero. He was somebody who was questioning his own relevance in a new world and the new media landscape around him. He is also someone who seemed lonely. And that's when I approached him. I asked him if he would be open to me shooting and just capturing his process. And because he was going through that kind of introspection in his life, he was like, 'yeah, do whatever you want as long as you don't come in anyone's way'. So, when I came around with my camera, it was a moment when somehow things just added up. We started shooting in 2018, but it's not so much about the time. It is the story of journalists, the story of people who go against whatever the mainstream culture is. This film is applicable to people who have startups, it is applicable to people who are trying to build anything from the ground up. When you disagree with people around you, that's a lonely journey.

Q/ How does it feel to have this film out in the world at such a crucial time when the news organisation in your film is in the middle of a takeover bid? Were there hints in the film about this?

A/ I made a film about how difficult it is to believe and continue fighting in a world where everything seems to be going against you. I wasn't necessarily interested in what the business side of NDTV was vis-à-vis takeovers. I don't have visibility on that. I was chasing a very personal story of Ravish's struggle and what it means to do journalism today. Of course, by some fluke, the film is coming out at a time when NDTV itself seems to be going through a lot. But I always keep requesting people that as long as we keep thinking about one person, one institution or one government, we will always think that there is some short-term problem that needs to be solved today. Instead, this film is a cry for building better systems. How do we make sure that there can be more news organisations, more journalists, better rights, better representation, better forums. We need to build systems that allows for a fairer, more healthier dialogue. There is no one person who is the saviour of journalism. That has never been true. 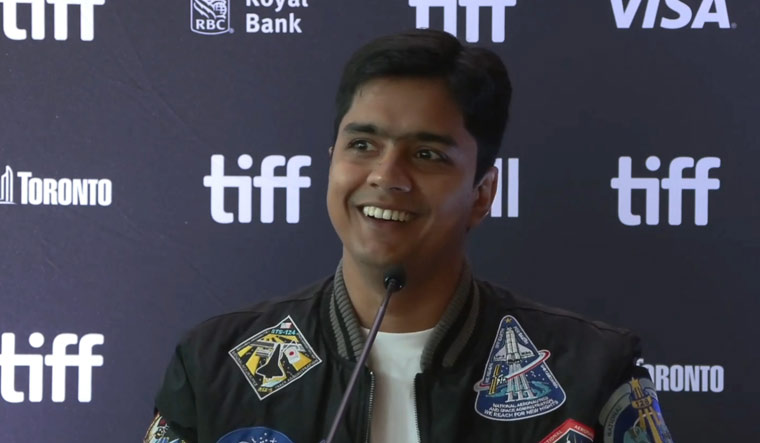 Q/ Your previous film had to battle censorship in India before it released in theatres. What kind of opposition are you expecting for 'While We Watched'? Are you expecting a bigger backlash?

A/ Not really. I think very often we overestimate the risks. The last film was not so much about Arvind Kejriwal or Aam Aadmi party or Yogendra Yadav, as much as the fact that they were characters in a film about the Indian political system and how we can make our politics better. It was a dialogue around what happens when new people come into politics and are faced with challenges. It was a very real depiction and facilitated a richer understanding of Indian politics. And that's why it got a censor certificate. 'While We Watched' is my effort towards building better news. I don't see any problems with people disagreeing with me. We are living in polemical times. All of us disagree very passionately as we rightfully should. But I believe that we are all trying to build a better system. We are trying to build a better country, a better time, a better future for all of us. And for that, it's very important that we have a dialogue. I am hoping, aspiring, for a better dialogue, just like I had with my last film. So, I have a very healthy precedent to go by. And I am really looking forward to it.

Q/ On social media and drawing rooms, it's very cool to dismiss journalists and media organisations who cave in to pressure or are not as "intrepid" as other role models. Seeing the many contradictions, conundrums and ethical choices that are made in a newsroom today, how has your view changed about journalists or the profession? How do you feel you stand corrected?

A/ I completely agree. And I think it's very, very short-sighted of people to dismiss individuals and organisations in this manner. News again, as I said earlier, is a system of public information and it has to represent the diversity of opinions. So, I am in no hurry to dismiss people because I disagree with someone or because I agree with another. But where is the system? What systems do news organisations have within themselves? Even if you want to present a monolithic view, how is it being decided? Is it being decided by just one person and what they feel? Fantastic, but what is the level of dialogue that they have within their teams? How diverse are their teams? We need a realistic assessment of these things. We have to think long-term, we have to think in systems. Again, this film is not about one organisation. It is not about some sort of saviour complex because that is a self-defeating idea. All saviours go through their own crisis, all saviours fail after a while. But systems are fantastic. In India, we have great public institutions. 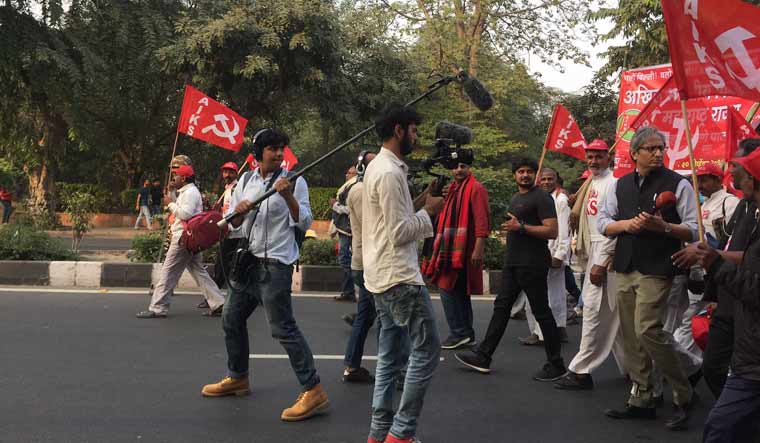 'While We Watched' intimately chronicles the working days of Ravish Kumar

Q/ You have described 'While We Watched' as a docu-thriller. Can you tell us about the narrative techniques employed to show the madness of a TV newsroom?

A/ It's a classic newsroom thriller.There are a bunch of people within a newsroom who are trying to see how to make the news better. And they are struggling. My films, they flow like any other Bollywood film. I make films for my parents, cousins, friends, my family. And India has a huge film-consuming culture. So, my films speak to them in the same language that the film-consuming audiences here are used to. Just like it was with 'The Insignificant Man'. These are observational docs. There is no voiceover and there are no interviews. The idea was to get into the mind of Ravish Kumar and try and chart his inner journey and fears in the newsroom that he was in. It was an aspiration to try and track the inner life of journalists today who are working on various sides of the political spectrum or even the news spectrum. And the idea was to make it as friendly to the masses as possible.

Q/ Are there other newsroom thrillers that you would like to cite as examples or inspiration?

A/ There's a bunch of newsroom dramas or thrillers that I really like. There's Aaron Sorkin's 'The Newsroom' and Tom McCarthy's 'Spotlight'. Also, the 2019 Romanian documentary film by Alexander Nanau called 'Collective . And then this other fantastic film which I saw in my childhood called 'Phir Bhi Dil Hai Hindustani'.