Upgrading Lives by Biohacking, the Holistic Indian Way ; The Book which became a Movement 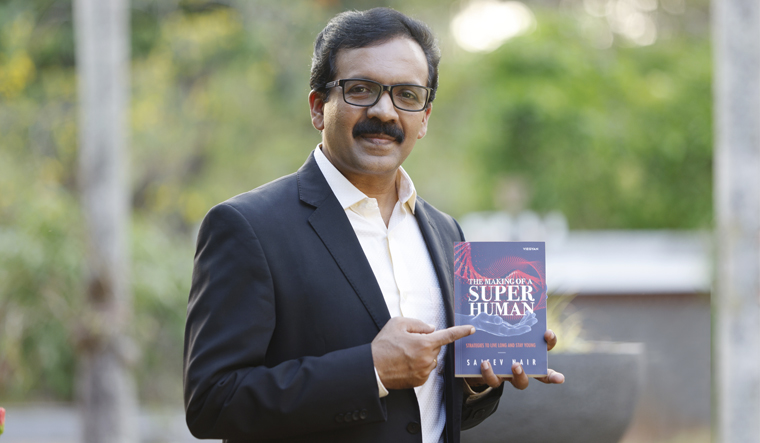 Noted wellness evangelist, pioneer of Indian bio hacking and transformational coach, Dr. Sajeev Nair who has touched millions of lives, is now leading a revolution in upgrading lives through the science of biohacking, by bringing together next generation medical research and millennia old Indian wellness systems of Ayurveda, Yoga & Meditation.

Most life gurus invariably face one of these two challenges. Either it is the difficulty in walking their own talk themselves, or it is having nothing other than the success of their motivational career to show as proof. Dr. Sajeev Nair hasn’t faced either of these challenges, due to his unique traits and that is what makes his ideas and innovations worthy of deep consideration.

A double postgraduate in science & business, Sajeev began his career in the pharmaceutical sector with some of the top-notch companies and then moved on to different industries. It was an inner calling that he was destined to do much more in life, in a much better way. Recalls Sajeev, “I always knew I could achieve a lot more if I can upgrade myself.” An avid reader of the science behind peak performance, Sajeev immersed himself into the fundamentals of neuroscience and began experimenting on himself the various scientific processes to enhance performance and productivity. Thus, was born Sajeev’s research project called ‘Thought Process Reengineering (TPR)’.

From a corporate sector executive, Sajeev had become a noted entrepreneur in the wellness industry, having set up the largest distribution networks in India for some global wellness brands. He became a business leader for thousands of people, and by the time TPR was launched as a product, Sajeev had become its greatest testimony, a living proof of personal transformation through TPR.

The introduction of TPR was well received in the market, and soon Sajeev became a much sought-after corporate consultant and transformational life coach. Since then, he has consulted for hundreds of the most reputed companies in India and Middle East and also mentored thousands of entrepreneurs. To take the concept of TPR to masses he launched Peak Performance conventions titled ‘Rise UP,’ which attracted tens and thousands of people in India and abroad.

By the time he was in his 40s, Sajeev had achieved success, fame and reach that most of his peers could only dream about. But rather than resting on his laurels, he was plotting for his second innings, his life after 50 years. Says Sajeev, “I knew performing at peak levels was going to be more challenging past 50, but I wanted even more of performance post this half-century mark. Thus began my deep study and practice of biohacking to upgrade my life.”

Here too, instead of adopting Western style biohacking in its entirety with its focus on embedded chips and such controversial technologies, Sajeev pioneered his own scientific version which brought together its best aspects like personalized epigenetic lifestyle modifications (EPLIMO) based on Geno-Metabolic Assessments, and the best practices from Indian wellness systems like Ayurveda, Yoga & Meditation. His journey into this holistic version of biohacking is best captured in his recent bestselling book, ‘The Making of a Superhuman’.

Biohacking is the science of taking charge of your own biology by using DIY tools, products and services. Sajeev was convinced that just by providing information or knowledge is not enough to empower people to Biohack. Hence on his 50th birthday he decided to launch a master piece project which could empower millions of people to take charge of their overall life and upgrade. This he did by launching his biggest venture to date, Vieroots Wellness Solutions, whose flagship product is EPLIMO, the Personalized Lifestyle Management tool. EPLIMO soon attracted the attention of Bollywood superstar, entrepreneur & startup investor, Suniel Shetty who has taken an equity participation in the health-tech startup.

Thousands of people have already upgraded their life using EPLIMO processes in the last one year. Today, major hospitals are also adopting EPLIMO as it is the most advanced and scientific way to geno-metabolically assess the chances for developing any of 200 lifestyle diseases like diabetes, obesity, high BP, cardiovascular diseases, cancer etc and for keeping them at bay through lifestyle modifications spanning diet, supplements, exercises, yoga, meditation etc.

Says Dr. Sajeev, “EPLIMO not only supports healthy longevity, but also high productivity and peak performance, and thus is the only such advanced scientific tool available in India to truly upgrade your life.”