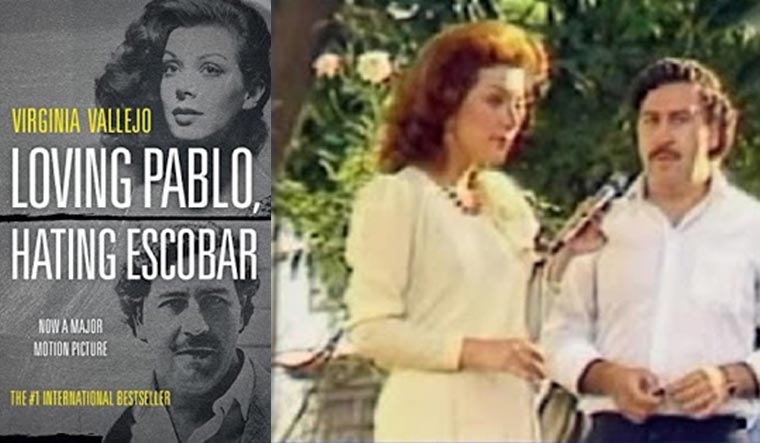 Loving Pablo, Hating Escobar is a book by Virginia Vallejo, a Colombian journalist and TV anchor who had a romantic relationship with Pablo Escobar, the notorious narco lord of Medellin.

She fell in love with him while attending a party in his ranch Hacienda Napoles in 1982. Later in 1983, she interviewed him to showcase Escobar’s project to provide houses to the poor as part of his plan to become popular and enter politics. She was the first journalist to interview him on TV. He got elected to Congress but was hounded and expelled on the charge that he had made his money in narcotrafficking and his involvement in several murder cases.

Virginia continued her romance with Escobar for five years till 1987. She was thrilled to be picked up by Escobar’s private Pegasus jet from Bogota to Medellin. They used to meet in hotels and sometimes even in her apartment in Bogota. Later when he was on the run, he met her in secret locations. He showered her with gifts and financed her shopping trips to New York, Paris, Miami and Milan. She and he pretended to be like Bonnie and Clyde and sometimes as Libertador (Simon Bolivar) and Libertadora del Libertador (ManuelitaSaenz). She proclaimed to him repeatedly that she loved him as she had never loved another.

Virginia has reproduced many of her conversations with Escobar. Some of these are personal and romantic while many are about Colombian politics, corruption, drug trafficking, guerillas and the inside story of famous events such as the bombing of the Supreme Court and assassination of Luis Galan, a presidential candidate. She supported Escobar’s campaign against the extradition of Colombian drug traffickers to the US. She had recited Neruda’s love poems to Escobar and shared her knowledge and wisdom with him. He tried to impress her with stories of his exploits, adventures and power.

He shared some of his trade secrets including how he and his fellow drug traffickers financed politicians. For him, the beautiful, educated and intelligent socialite TV personality was a trophy and free publicity. Virginia used her Escobar connection to advance her own career with the knowledge and contacts she had gathered through Escobar. She carried messages and sometimes money from Escobar. She even tried to mediate in the dangerous rivalry between the Cali and Medellin Cartels.

Virginia was already married and divorced twice before she met Escobar. She had affairs with many rich men, about which she boasts openly, “ I had met my first version of “the richest man in Colombia” in 1972 at the presidential palace; I was twenty-two, and he was forty-eight and divorced. Days earlier, my first lover had told me he was the second-richest man in Colombia. For the next twelve years of my life, my boyfriend or secret lover would always be whoever occupied the throne of Colombia’s richest man”.

When the Colombian and US governments as well as the Cali Cartel went after Escobar, he retaliated with bomb attacks and assassinations. During this time Virginia started courting other men including a German Count. She even flirted with Escobar’s mortal enemy and rival from the Cali cartel. Escobar became jealous and started troubling Virginia. She was scared of Escobar and his henchmen who tapped her phones and monitored her movements. That’s when she started hating him. He was killed by the security forces in December 1993. In 2006, she turned an informant for US FBI which took her to Miami for deposition in some drug and criminal cases. The US government gave her political asylum in 2010 and she is settled in Miami since then.

Virginia Vallejo’s book Amando a Pablo, Odiando a Escobar, published in 2006, became a best seller. A film, Loving Pablo, with Penelope Cruz starring as Vallejo was made in 2017. There are also several other movies and soap operas based on the romantic relationship between Vallejo and Escobar.

Vallejo’s book gives an insight into Colombian politics, drug trafficking, guerillas and corruption from the viewpoint of a smart, beautiful and ambitious woman who took advantage and tried to get the best out of all that she has exposed. She had no scruples or conscience in making use of men and their money for her own ends with her belief, that when "women’s bodies pass through men’s hands, it is the men’s heads that pass through women’s hands".

She was prepared for all the surprises of the underworld of drugs and crime, singing Rubén Blade’s song, “la vida te da sorpresas y sorpresas te da la vida” (Life gives you surprises, and surprises give you life).