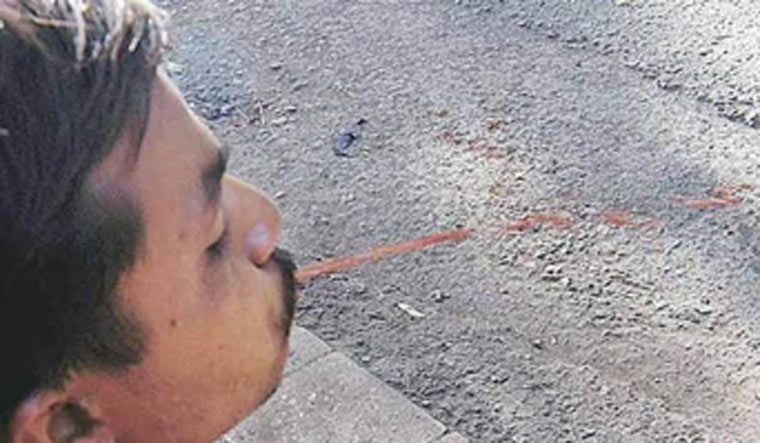 The ‘Me Too’ movement has done its job, naming and shaming predators and turning urban wildlife into passably well-behaved gentlemen.  We must now try and turn much larger sections of our populace into civic-minded citizens by joining the ‘Aak-thoo’ movement. There’s no time like now, for the current pandemic has given a fresh lease of life to the attempt to stop Indians from throwing caution along with a million pathogens to the winds.

Early in April this year, advocate and activist Armin Wandrewala filed a public interest litigation in the Bombay High Court against spitting in public. Their lordships acted with alacrity, and on April 7 issued a court order directing the police to take action. We wish the authorities good luck of course, but in India it is not one leak that they are trying to plug, they are trying to stop a spit tsunami.

If you were to stoop and examine the long, dimly-lit corridors of our history, you will find them spattered in many hues, for we have been spitting for as long as we can remember. When India battled its colonial masters, M.K. Gandhi had tried to rally the side, saying, "If we Indians could only spit in unison, we would form a puddle big enough to drown 3,00,000 Englishmen." Well, the 'Quit India' movement is over, but the 'Spit India' movement continues in full flow. We have forgotten the harder lessons that the M.K. Gandhi taught us like Ahimsa and non-violence because it did not quite suit our native personality, but spitting suits us to the ‘T’ or the ‘thoo’!

Spitting in public is India’s great unifier, transcending the besmirched walls of religion, region and income. If the poor spit as they walk, the rich spit on the go. We have all seen owners of posh cars, slowing down a bit, opening the door and emptying the contents of their mouths on to the road. That is because spitting is a pan-India phenomenon, or more precisely, a paan-India thing.  You don’t need to hunt for proof – just look for the nearest corner or public wall to behold regurgitated folk art in the betel leaf medium. The betel leaf accompanied by tobacco plays a big role in promoting the spitting culture. It has made its way into popular culture. Be honest – didn’t we all watch with amusement as Big B intoned ‘Khaike paan Benaras-wallah, and spat keeping time with the music?

You don’t find many people abroad treating the world as their spittoon. The acid-veined V.S. Naipaul picked on this when he said, "The Indian who has not travelled abroad cannot and does not know what civic cleanliness means, and so does not mind its absence.’" But Naipaul in his India-bashing mode was more angry than accurate.  A century before the writer had begun plying his trade, spitting was common in the US. Then, widespread cases of TB led to a vigorous nationwide campaign, which got the Americans to turn over a new leaf.  We Indians frequently turn over a new leaf too – only it is the betel leaf.

Social sanction has meant that we are not furtive spitters who look around to see if anyone is watching before hastily letting fly. On the other hand, we spit as if we relish the full process, accompanied by sound effects at every stage – from the deep gurgle to the climactic splash. Why is the thoo, the whole thoo, and nothing but the thoo so much part of our lives? As one who has walked around our cities a lot, and have been a near victim of spitters with poor marksmanship, I think I know some of the reasons. Here they are:

There is so much to be spat at. You can’t argue with this line of thinking. Everyone will agree that looking at the state of affairs, spitting is a spontaneous natural reaction – often the only one possible.

Spitting is punctuation: We don’t spit only as a mark of disgust or because of the phlegm lodged in our gullet. We treat spitting as a punctuation mark. When you are narrating a long story, it helps mid-sentence to turn around and spit.  It is the non-verbal equivalent of – ‘do you get what I am saying?’

Spitting is a convivial social gesture: We are social creatures, and sometimes we spit because everyone in our circle is doing it. You don’t want to look like the odd man out and appear stand-offish.

Spitting is self-defence: If as the experts say, your sputum can hold all manner of toxins, imagine how dangerous it would be for me to retain that unholy cocktail in my system! Better safeguard myself by diffusing them around now and again, and good luck to those passing by.

While the new rules issued by the authorities are welcome, the question is who will ensure that they are implemented on the ground? Alas, the guardians of the law themselves are not above occasionally turning aside from conversation, cupping their mouth, and…aak-thoo. It could prompt you and I to turn around and say: Et thoo, Brute!