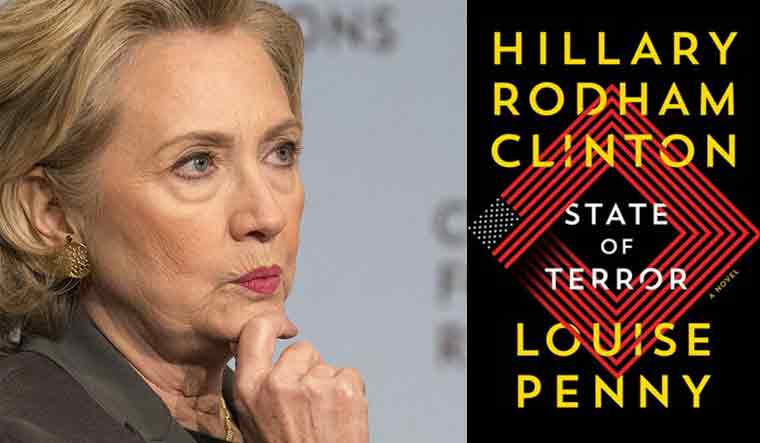 Collage: Former US Secretary of State Hillary Clinton, the cover of her upcoming novel with Louise Penny | Reuters, Simon & Schuster

Though the reality of the Trump administration was thriller enough for former US Secretary of State Hillary Clinton, the once presidential-hopeful has turned to fiction to outlay the trials and travails of being the US’s home minister.

The cover of State of Terror, a thriller novel co-written by Clinton and mystery novelist Louise Penny, was released on April 14. According to publishers Simon & Schuster, State of Terror will feature a tale of “international intrigue” and features “behind-the-scenes global drama informed by details only an insider could know”.

I wish I could have it both ways here—work on a book with Louise Penny but still have a new Louise Penny book to look forward to, without knowing the ending already!

I'm thrilled to say "State of Terror" will be out October 12 from Simon & Schuster.https://t.co/wFFmAIb2qK pic.twitter.com/mv8iGkMG5O

The novel follows a novice Secretary of State who has joined the administration of her rival, a president inaugurated after four years of American leadership that shrank from the world stage. A series of terrorist attacks throws the global order into disarray, and the secretary is tasked with assembling a team to unravel the deadly conspiracy, a scheme carefully designed to take advantage of an American government dangerously out of touch and out of power in the places where it counts the most.

Penny, who has authored award-winning novels like Still Life (2005), The Cruelest Month  (2008), The Brutal Telling (2009), and Bury Your Dead (2010), said it was an incredible experience working with Clinton to "get in the mind" of a Secretary of State. "What an incredible experience, to get inside the State Department," Penny said in a statement. "Inside the White House.  Inside the mind of the Secretary of State as high stake crises explode.  Before we started, we talked about her time as Secretary of State. What was her worst nightmare? STATE OF TERROR is the answer."

The book is due to release on October 12.