How Mahua has become a cause of conflict in Telangana forests 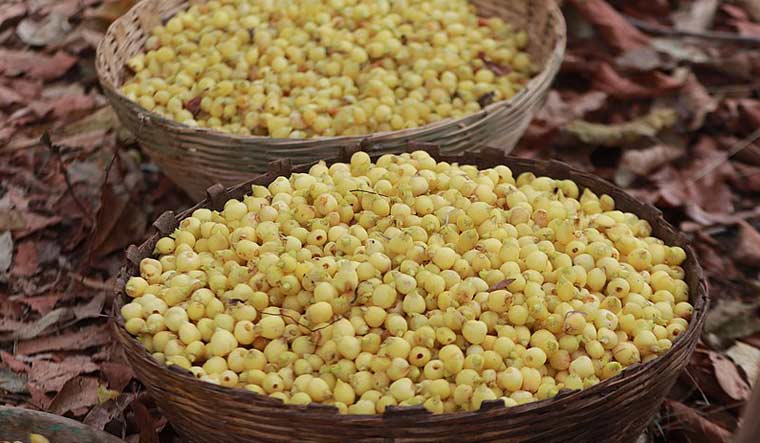 In the land of tigers, a flower is an object of endearment. It is almost like the base note of Ippa Puvvu (Mahua flower) is ‘sweet’. The fragrance is pleasurable and the taste is intoxicating, say the natives of the wildlife corridor in Amrabad in Telangana, the second largest tiger reserve in the country. The brew of the flower is in a league of its own. Considered a traditional drink, Ippa Sara or Mahua liquor has many patrons, spread across generations. “It is very tasty. But, mind you, just one glass is enough to knock a person out for the entire night,” cautions a middle-aged tribal, a regular consumer of the ‘flower drink’. Each bottle of Mahua liquor sells for Rs 500 or more, almost putting some of the branded liquor variants to shame. Then there is Ippa Laddoos, a local delicacy widely enjoyed by women. Mahua is also believed to have high medicinal value and is used in traditional treatment methods.

In Amarabad Tiger Reserve, a tough terrain of 2600 sq.km, there are an estimated 15 to 17 tigers. The large cats start getting more visible in this part of the world during summers. The Madhuca Indica or Mahua tree too starts flowering during this time. The flowers, like the tigers, are visible between March and June, enticing humans and animals.

During this period, the local tribes and the animals compete to get their hands on the dropping flowers, a recurring conflict since time immemorial. There are no dearth of stories of close shaves or deadly attacks on humans by wild animals. The flower is a favourite of bears, wild boars, deers and birds. The gatherers resort to the first-mover advantage. It is a standard practice to enter deep forests before dawn to collect the flowers before the animals start their day and savour them. Even then, a face-off is not uncommon as bears are known to feed on the flowers even at nights. The locals have their own methods to avoid confrontation with the animals, by using hunting dogs, fire or indigenous weapons.

One such attempt to gather flowers has now turned into a major issue in the state. On the intervening night of March 26 and 27, the forest department staff on patrolling duty spotted a group of men and women camping in Mannanur West, a part of the reserve in the Nallamalla forests. According to the forest department officials, a couple of them escaped while the rest were brought to the base camp at around 1.30am. In the morning, a patrol team set out in search of the rest of the members of the group, who belonged to Chanchupalem Thanda, a hamlet. In the morning hours, a mob suspected to be associated to the group, gathered near the camp and allegedly attacked vehicles and officials. A video recorded at the site shows the violence. The forest department has around 3 video clips to back their version that they circled the group camping illegally in the forest and resorting to violence later when apprehended. On the other side, the tribals in question, the Lambadas, have accused the officials of high-handed behaviour and physically assaulting them. They even approached the state human rights commission on the issue.

The entire episode has exposed the underlying tensions between two tribes, Lambadas and Chenchus. In this particular case, the group was that of Lambadas and the majority of forest guards involved in the operation were Chenchus. Known to be shy and naive, Chenchus are one of the most primitive tribes in the country who are spread across the forests of the state. Since most of them are well-versed with the ways of nature and in harmony with wildlife, they are usually inducted to be forest guards. The Chenchus, a tribe of hunters and gatherers, survive on forest products. The Chenchus are known to be a passionate drinkers of Mahua liquor.

“We tie a cloth to a stick and place it near the tree where we intend to collect the flowers from. The moving cloth scares away the animals and also acts as a sign for the others to keep away from it. After 1-2 weeks we collect a sack or two of flowers and return,” said a Chenchu leader of the area. For the Chenchus, the brewing and consumption is a matter of pleasure and an opportunity for social interaction. They are upset that the Lambadas and other communities are trying to commercialise this activity. While the Chenchus are being reduced to the consumers, the Lambadas and other communities are slowly getting into the production and sale of the liquor.

In the recent case, the Lambadas, who stay on the periphery of the forest, travelled long distances to collect large quantities of the flower. The tactic being regularly employed by some of the Lambadas to clear the ground by setting fire to dry vegetation for the flower collection is under scrutiny.

“Why do they have to camp inside the restricted tiger reserve in the night? They planned to burn a part of the area in the morning and collect the flowers. We cannot allow it to happen. We need to ensure that it is a peaceful zone as it can force tigers to withdraw from this forest,” said a senior forest official on condition of anonymity. According to officials, there have been 200-300 forest fires this year in Amrabad tiger reserve and its surroundings.

This month, four Chenchus received severe burns because of a forest fire, and the cause is still unknown. One of them died last week, which has made the tribe more wary of the practice. The Chenchus admit that they have also used fire to clear the ground but only on rare occasions and not as frequently as other tribes.

Meanwhile, the issue has taken a political turn with some of the local Lambada leaders of various political outfits training their guns on the forest department, accusing them of unnecessary interference. The department is gearing up to prove that it was not them who crossed the line and it was the other party which was on the wrong side of the law.

With multitude conflicts in the forest, the flower has turned into a thorn.