The case of two Bhuri Bais and one Padma Shri

Similar name and profile of two Bhil artists cause confusion 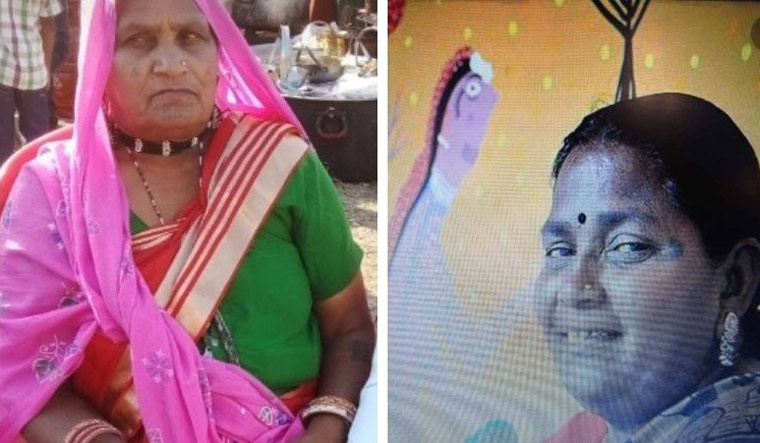 During the annual fair of Gol Gadheda, a tribal festival celebrated in certain parts of Gujarat and Madhya Pradesh a week after Holi, young men try to climb a slippery 30-feet pole to find their matrimonial match. Slathered with oil, the pole has a knotted bundle of coconut and jaggery hanging on top, which is sought by bachelors while women standing below playfully beat the climber with sticks to distract him. If the climber manages to snag the bundle without falling off, he gets to choose a girl he can marry from the bevy of stick-wielding women.

Sher Singh Bhil recounts the details of this annual fair on the phone from Bhopal two days after he learnt from the local newspaper that his mother Bhuri Bai, a Bhil artist, has been conferred the Padma Shri. 'Gol Gadheda' is also one of his favourite paintings by his mother. He shows images of the same on WhatsApp. "But no media house has gotten in touch (with us) so far. We have not even received any official communication," says Sher Singh, 33, who hails from Jher village in Jhabua district of Madhya Pradesh. He belongs to the community of Bhils, the second largest tribal group in Madhya Pradesh after the Gonds. He picked up the tradition of Bhil painting from his mother Bhuri Bai when he was seven years old. It was his mother who taught him to work with a paint brush on a canvas, from colouring images on the mud wall of his house with a datun (teeth-cleaning twig). His mother is also the first woman in the Bhil community to paint on paper, Sher Singh says. Unsure of her exact age, Sher Singh says his mother is around 50 to 55 years old.

But Jhabua district has another Bhuri Bai, who is almost the same age as Sher Singh's mother. She is also a famous Bhil artist who works in Bhopal. And she has more than likely won the Padma Shri.

"Some reporter pasted the wrong Bhuri Bai's photo, of the one who works in Indira Gandhi Rashtriya Manav Sangrahalaya. I work in the Tribal Museum in Bhopal. I am 51 years old. The other Bhuri Bai is also my age, maybe a little older. Both of us never received any prior official communication. But I have received the award with Kapil Tiwari because everybody is congratulating me now. Chief Minister Shivraj Singh Chouhan met me on November 26. And tomorrow he will be coming to my house," says Bhuri Bhai Baria. Sher Singh's mother writes her full name as Bhuri Bai Bhapor.

“I started painting on paper under J. Swaminathan at Bharat Bhawan and went on to receive numerous state awards," says Bhuri Bai Baria, adding another layer of uncertainty as to who really was the first woman to paint on paper between the two.

Anubhav Nath, director of Ojas Art Gallery in Delhi, has showcased the works of both the artists. The gallery has been representing traditional and vernacular artists for quite some time now. "There was a confusion in social and print media as there are two proficient artists by the same name. Sadly, which lead to both thinking they had received the Padma Shri. Of course, only one of them has gotten it," says Nath.

Sher Singh is still unsure who has won the award. "We are not able to confirm anything," he says.