Suneel Posimreddy captures political developments that occurred in AP in 2018, 19 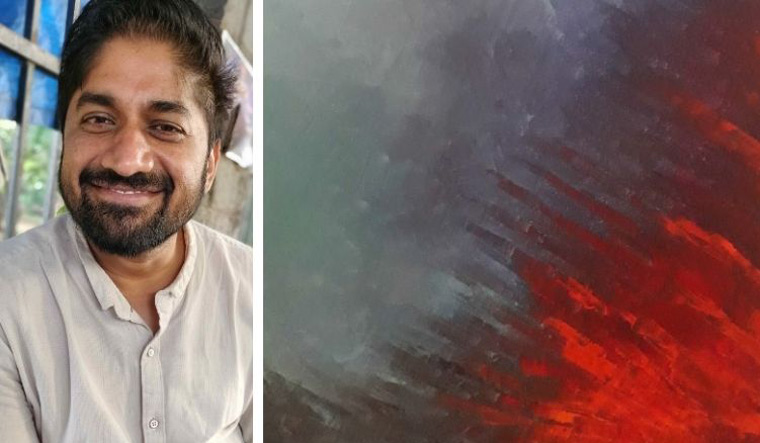 Is it possible to paint democracy? Or give colour to politics? A Hyderabadi artist believes so. A few political developments that occurred in Andhra Pradesh in 2018 and 2019 is now a work of art at the studio of 42-year-old Suneel Posimreddy. The painting has different shades of dark red, orange and other colours and conveys a disturbing message that there is a threat to democracy. There is another painting in the collection on unethical politics being practised by few political parties. These are just some of the 400 odd paintings that have been produced over the past few years under the theme ‘The Mood Catcher’.

A product design strategist in a software company in Hyderabad, Posimreddy’s art is a different form of commentary on the state of affairs. Whenever there is a social issue or a ghastly crime against a woman, Posimreddy tries to capture them through his oil paintings or sketches. For instance, post the gruesome gangrape and murder on the outskirts of Hyderabad, Posimreddy painted the mood of the women in the country by depicting a few raised hands in the backdrop of fire.

He credits his profession for sparking off his passion for capturing moods through paintings.

“Right from my childhood, I have always been interested in painting. After completing my Masters in design in digital media abroad, I came back to India. As part of designing a product and experience-building for apps, I had to study the users, their knowledge, requirements and feelings. This was the step before we would get into the designing part. That is when I realised that I could capture the moods of various people I meet.”

This interest took a different turn after Posimreddy began associating with a political party. During 2014 elections, he was closely involved with the digital work of the party, bringing him closer to the on-ground politics of Andhra Pradesh and the newsmakers.

“When you are in politics, the world is different. The events I saw and experienced triggered a new set of paintings. Some political incidents also inspired me to make paintings, showing the positive side of the world,” said Posimreddy.

The Fine Arts graduate, who shuttles between US and India, wants to create a market for Indian artists in the western world.

“I traveled a lot and saw a lot of people invest in paintings in the Middle East, Europe and the US. My long-term goal is to build an art gallery for local artists and get revenues by creating a market outside the country where there are potential buyers,” said Posimreddy, who made the most of the lockdown with his brush and colours.