How Lahore is planning to honour its luminaries

Through the plaques, the Sangat also wants to create awareness 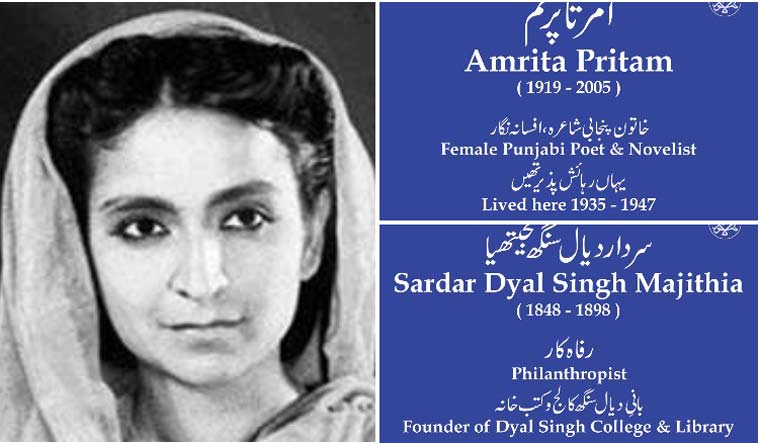 A city never forgets. Delhi might have renamed a leafy road to erase its past, but Lahore is trying to preserve memories of a few who left. From the 'Lion of Punjab' Lala Lajpat Rai to legendary singer Mohammad Rafi, famous Lahoris will be honoured by the city they once called home.

Blue enamel plaques will be put up in buildings associated with them. On the list is Amrita Pritam, described as a Punjabi poet and novelist—an acknowledgment of a shared past. Also, Sir Dyal Singh Majithia, “a philanthropist” who was the founder of Punjab National Bank and the founder of the Dyal Singh College. Sir Ganga Ram—an architect who left an indelible print on Lahore and was a philanthropist—already has a plaque up.

Pritam’s house in Hauz Khas was knocked down last year. A red name plate with K 25 is all that is left. In Lahore, however, where Pritam worked for a bit and married her first husband, there will be a blue plaque that marks her home in Anarkali. While she never went back to Lahore, the city she left behind has not forgotten that she once lived there. The idea of Lahore Sangat—motley group of architects, artists, historians and prominent Lahoris—founded about a year ago, is to remember all those walked its streets to create history going beyond boundaries.

“We want to honour prominent Lahoris regardless of caste, creed or nationality,’’ says Qasim Jafri, member of Lahore Sangat, an informal association that is undertaking the project.

Through the plaques, the Sangat also wants to create awareness. Jafri—a hotelier by profession and a lover of poetry—traces his roots across the border. Agra was home for his family before they moved during Partition. The research too, often involves cross border collaboration. “It takes time,” he says.

So far, more than 10 plaques have been put up across the city. There is a plan to put up 140 plaques honouring writers, architects, artists and sportsmen.

Those who stayed, too, will be honoured. Legendary singer Noor Jehan, poet and humanist Faiz Ahmed Faiz, writer Sadaat Hasan Manto and Rustam Gama Pehalwan, known as the Great Gama and considered one of the greatest Indian wrestlers, will have plaques to honour them. Manto left Bombay to make Lahore his home and Rustam was born in India but chose to move to Lahore after Partition. Apart from his wrestling prowess, he is also known for saving many Hindus during the riots.

In a city that has changed enormously in the decades after Partition, it takes a lot of research to narrow down the right place to put the plaque up. Lala Lajpat Rai met with the fatal blow while protesting against the Simon Commission at the Lahore Railway Station. Rai was with protesters leading a non-violent march demanding “Simon Go Back’’ holding black banners. The superintendent of police James A. Scott ordered a lathicharge, choosing to lead from the front. Rai sustained a head injury. Yet he addressed a crowd later—at Nasir Bagh—where he said: "I declare that the blows struck at me today will be the last nails in the coffin of British rule in India.” Three weeks later, he died.

The plaque, according to Lahore Sangat's Facebook page is to be put up at Nasir Bagh where he gives an impassioned plea. To ensure that each plaque—as well as where it has to be placed—has to be carefully. More than just getting the details just right—like in the case of Lala Lajpat Rai who was injured in one place and spoke in another—it also sometimes needs the permission of the current owners. “The government is involved, too. These plaques have to have legal cover. So that they can’t be taken off,” he says.

Lahore is not the only city waking up to its pre-Partition past. Actor Dilip Kumar's house is being acquired by the government and will be renovated and preserved to made into a museum, according to news reports. A week ago, Kumar had tweeted evocatively about his memories of growing up in Peshawar, riding piggy back on his grandfather's shoulders listening to a storyteller in Qissa Khwani Bazaar "narrating stories of valour and victory, deceit and retribution which I would listen to with wide-eyed attention seated next to my father and uncles”. A city never forgets.