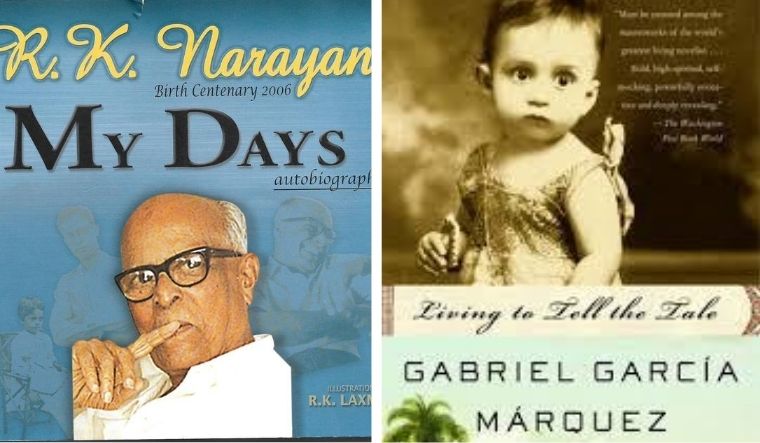 I have just finished reading My Days, autobiography of R.K. Narayan who created the fictional town of Malgudi in his stories. I could not help the temptation of comparing it with Living to Tell the Tale—the memoirs of Gabriel Garcia Marquez— whose imaginary town in his novels is Macondo. Both Malgudi and Macondo are emblematic of the culture of south India and south America.

The titles of the memoirs of Narayan and Marquez give clear clues to their lives, novels and characters.

Narayan's My Days  is simple, clear and short.  It gives details of his life as it happened from the beginning to the end. Marquez’s Living to Tell the Tale (Vivir para contarla) holds suspense, mystery and excitement. There is a quote attributed to Marquez, “Men have three lives: a public life, a private life and a secret one”. There is a Latino macho saying, ‘A man without stories is no man’.

So one’s curiosity is raised as to what next would come out from his ‘storytelling’. In south India life is just a life. It starts with birth, childhood, education, employment, marriage, children, grandchildren and the end with philosophical reflections. In south America it is a story. Marquez’s book starts with a 23-year-old him accompanying his mother on a trip to his ancestral village. The following chapters go back and forth with whatever stories Marquez feels like telling.

Narayan writes in simple and unpretentious prose, narrating the story and describing the characters without delving deep into any analysis. He adds touches of humour, irony and satire but in a subtle manner. Marquez’s writing is graphic and filled with rich images. He weaves fantasies and realities one after another and blurs the line between them in the same style of Magical Realism he uses in his novels.

While Narayan’s narratives flow smoothly like the calm Cauvery river in the flat delta area of Tamil Nadu, Marquez’s writings are like the Magdalena river of Colombia which is turbulent and unpredictable. The river journey by boat could last for a few days or weeks depending on the formation of sandbars, variation of water depth and accidents on the way.

Marquez wrote in his mother tongue about the people who spoke Spanish like him. But Narayan wrote in a language foreign to his characters. The ordinary men and women of Malgudi speak Tamil or Kannada and do not understand English. It is amazing that he has made the natives to come alive in a foreign language. I could feel the emotions, characters and moments as naturally as I felt when I read such stories in Tamil with familiar local expressions.

Narayan is a writer of few words. But within his short descriptions and phrases, he evokes vividly a whole lot of emotions and feelings around the events and characters. Marquez, on the other hand, is given to overwhelm and mesmerise the reader with long, lyrical and effervescent expressions which flow tumultuously like a mountain stream. Narayan takes us through the short village roads. With Marquez, it is a long journey through mountainous roads overlooking jungles, valleys, peaks and precipices.

Narayan gives details of his life one after another in a direct and linear way: his childhood in Chennai with a monkey and a peacock as his pets; his college days in Mysore; his choice of career as a writer; his short married life and the death of his wife; his struggles to make both ends meet; his experience as being part of a typical joint family; the challenges he faced in renting houses and building his own home eventually; his interactions with neighbours, relatives and friends; his success as a writer with money and fame; and the happy ending when he sees his grandson’s attempt at a short story on his next door uncle.

Marquez tells us tales of his adventures and misadventures in his signature style of his novels. His life story is dense with details, twists, turns and many labyrinths. His memoirs mesmerises and surprises the readers. He opens his life boxes randomly and one does not know what will come out of each box. One is filled with anticipation and excitement. Marquez ends his book with this last sentence, “On Thursday of the following week, when I walked into the hotel in Geneva at the end of another useless day of international disagreements, I found her letter of reply”. Later we come to know that the letter was from his childhood sweetheart Mercedes Bachart. He had proposed to her when she was 13 and she took her time to say yes. They were married when she reached the age of 26.

Narayan’s autobiography avoids the larger issues of politics and history. He is apolitical and holds no ideological beliefs or associations. He does not touch issues of the day such as freedom struggle, Mahatma Gandhi, British colonialism, Marxist theories or the world wars of his time. The Malgudians are insular and somewhat disconnected from the issues of the world outside. They do not try anything revolutionary. Nor do they expect any dramatic changes. They are tied deeply to their millennial traditions, horoscope, rituals and practices.

Marquez relates his life to the issues of violence, wars, repressions, revolts, dictatorship, revolutions, exile, politics and history of Colombia, Latin America and the world. He refers to heroes and villains who achieve greatness and face tragic ends. Marquez was a leftist and remained a personal friend of Fidel Castro, even after many other writers distanced themselves from the Cuban dictatorship which stifled freedom of expression. His anti-imperialist statements were labelled as subversive by US which denied him visa for many years.

Narayan lived his entire life in Chennai-Mysore area except for his travel to the US, Australia and UK. He lived in the traditional Indian joint family system of grandparents, parents, brothers and sisters. Although he chose an unconventional career of writing Indian stories in English, he followed the tradition of his Brahmin caste and worked within the framework of south Indian culture in his personal life. He is austere, straightforward and modest in his style of life. He chose an auspicious day (Vijayadashami) to create his imaginary town of Malgudi for his novel. Horoscopes and astrologers played important part in his family life. After his wife dies within a few years of marriage, he refuses to remarry and continues his life as a widower. His daughter is brought up in his joint family. He never set his eyes on other women or sought sex outside. He was a teetotaller. His only sin was smoking.

Marquez’s life is colourful and adventurous. He is a typical Latino mujeriego (womaniser), just as his father was. Besides affairs and romances, he was a regular visitor to the brothels. He claims that he was a veteran of two bouts of gonorrhea by the age of 23.

While Marquez chose a young whore as protagonist for his last novel, Narayan’s last book is about his grandmother. Both the books are considered as autobiographical. The title of Narayan’s last book is Grandmother’s tale. One does not have to guess. It is simply the story of his grandmother and what she had told him in his childhood. Marquez’s last novel is Memories of My Melancholy Whores (Memoria de mis putas tristes). It is about the romance of a 90-year-old man with a young and almost adolescent whore. But the word ‘whore’ does not appear in Narayan’s autobiography or his novels. Nor is there any descriptions or narrations of sex in his novels.

Here are a few commonalities between the two writers. Both were brought up by their grandparents in their childhood. Both worked as news reporters to earn a living to start with before becoming professional writers. Both had struggled with financial insecurity during the initial phase of their career.

Coffee was the common stimulant for both. Narayan gulped cups of the steaming hot filter coffee made in traditional Tamil Brahmin way. In south India, you ask for coffee and you get only one kind, coffee and milk premixed with plenty of sugar. But in Colombia, there are many coffees and one has to specify what one wants.  Tinto is sweetened black coffee from leftover beans and the most popular. Perico is Tinto in which half the coffee has been replaced with warm milk. Perico escuro has less milk while Perico claro has more milk. Pintadito is black coffee with milk without foam.  Carajillo will make one tipsy because it has the alcohol of aguardiente/rum.

The Colombians describe the complexion of people through coffee. Whites are milk, blacks are coffee and the mulattos are coffee with milk (café on leche). In some cases, there is more milk and in others less. There are a number of Colombians who look like Indians with their coffee with milk complexion. There is a delightful Colombian comedy film Ambassador of India (Embajador de la India) in which a crook from the city pretends in a rural part of Colombia as the Indian Ambassador of India and manages to fool the people and take them for a ride. This is based on a true story. The Colombian was able to do it because of his coffee with milk skin colour.

Marquez spent hours together in the cafes filled with the aroma of the famous Arabic coffee of Colombia. Sometimes the coffee had the aroma of women. True.. There is a popular Colombian Television serial called as Café con aroma de mujer (Coffee with the scent of a woman), produced in the 90s. It is the story of romance between a coffee plantation worker with the son of the owner of the estate. There is a song in the serial which goes like this:

Coffee.. you are with the scent of my woman

Both the writers have said that their invented towns of Malgudi and Macondo are not so much as places but they are essentially states of the mind, which allow you to see what you want, and how you want to see them.