The 'First Cloud' fetched around Rs 1.2 crore in an auction bid 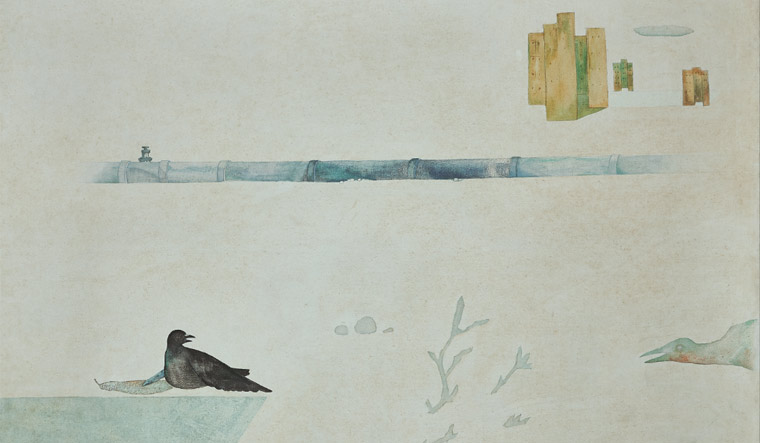 Tantric symbolism in art can conjure up minimalism of the most meditative kind. Clean geometric shapes, evocative hues and mystical themes make for some of the most pulsating works inspired by Tantra cosmology.

Indian painter Prabhakar Barwe (1936-1995) was an abstractionist who, influenced by Tantric symbolism, played with space and form like free verse. In a 1989 enamel on canvas, he distills the essence of a cloud. Rendered in the clearest pool of blue against a delicate avian drama, a small, stray cloud hangs on the far edge of the canvas. Its rain-washed, riverside feel has a calm, soporific effect.

Last week, the "First Cloud"  fetched around Rs 1.2 crore in an auction bid, a world record for the artist and a sign of his long overdue recognition in the art market.

Whoever said collectors have bigger worries than buying art in a pandemic.

In what could be the biggest art sale in the country since the lockdown began, an Indian auction house notched up over Rs 51 crore for a catalogue on Indian modernists. AstaGuru's online auction, Modern Indian Art, held on July 15 and 16, generated a revenue of Rs 51,43,52,066 for 48 lots, making it the biggest art auction to be held in India since March 2020, confirms art research and advisory firm Artery India.

"According to the Artery India Post Auction Knowledge Report on this sale, it holds the 34th rank amongst all Indian auctions conducted," says Arvind Vijaymohan, founder and CEO of Artery India. The highest price was achieved by a 1962 Akbar Padamsee work titled "Landscape" selling for Rs 4,30,33,811. Another highlight included a national record for KK Hebbar's 'Gold & Red', which depicts a traditional Indian dance form, selling at around Rs 98 lakhs.

But the unassuming abstract of Barwe heralds more diversity in a rarefied world of "saleable" modernists.

"Barwe's rise, particularly over the past three years, has been spectacular. Our intelligence data reveals that his turnover has risen from Rs 95 lakh in 2017 (from 9 works) to Rs 3.16 crore in 2019 (from 7 works)," says Vijaymohan. "Our databank further reveals that Barwe's record price was broken twice in just 16 months (March 2019-Rs 82 lakhs/July 2020-Rs 1.2crore)—a clear indication of the abiding demand for the artist's important works."

Born in Nagaon in 1936, Barwe's father worked at Bombay film studios and his grand-uncle was renowned sculptor V.P. Karmakar. His fascination with abstracts forms began at Sir J.J. School of Art where he was much influenced by Bauhaus painter Paul Klee. But it was at the Weavers Service Centre in Benaras that Barwe developed his tantra-based abstractionism. The record-breaking artwork sold at the auction can be traced to an earlier award-winning work titled "Blue Cloud', a visual ode to Kalidasa classic Meghadūta.

The first major retrospective of Barwe's works, titled 'Inside the Empty Box'  with over 100 works, archival material and 50 diaries, happened last year at the National Gallery of Modern Art (NGMA) in Mumbai.