How this visually-challenged mother inspired her beach volleyball star daughter

A rare genetic disorder left her blind, but Tara Strange refused to live in the dark 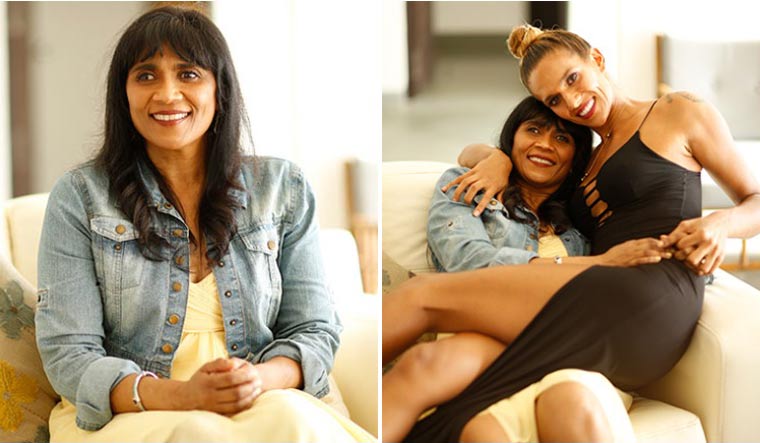 It wasn’t love at first sight.

It was physics that initially brought Tara, 54, and Greg Strange, 58, together. Soon, it was, as Atticus writes, “my atoms love your atoms, and it’s chemistry”.

But, first, a bit of history.

Tara spent her early childhood in Thiruvananthapuram, where her father, Gabriel Roy, worked as an assistant professor at an engineering college. He went to the US in his early 20s to do his PhD. And, Tara and her elder sister, Suchitra, were sent to the boarding school. Once Roy finished his PhD, he brought his family to the US. Tara was 11 then. While she was in high school in Tennessee, she played volleyball for a while (a sport that her daughter, Alexa Chitra Strange, would take up professionally in the US and younger son, Aaron, would play at the University of Southern California). At 16, Tara came back to Kerala to do her pre-degree in science. And, she fell in love with the land. She was supposed to go back each year to renew her visa, but she didn’t—she would go to Thekkady with friends instead. “When you are in boarding school, you really don’t see much of the place,”she says. “So, I just took the advantage to go [see] places.”

But it took her a year and a half to get her visa. And, when she returned to the US at 19, she had to enrol in a community college to get her credentials back before applying to the USC. That’s where she met Greg, a surfer of Scandinavian roots from “down south” in Georgia. He had taken a couple of years off to surf, and, like Tara, had joined the community college to get his credentials back.

While there, Tara was looking for a physics tutor, and she approached a guy who “looked really studious” and he suggested Greg’s name. “Him?” Tara had asked incredulously. For, Greg, she says, looked like a typical surfer with his long, blond hair. “I used to think that this guy must be one of those surfer bums who cannot really do any math or science,” she says, laughing. But she was proved wrong and he did help her with physics—Alexa, who was a commentator in the recently held RuPay Pro Volleyball League in Kerala, is quick to point out that it is usually the Indian teaching the Caucasian, but it was reverse in their case.

Initially, Greg did take his time with Tara though. “I don’t think he was really exposed to that many different cultures. I think the only thing that he knew that was kind of even remotely culture was Mexican,” says Tara. “One of his friends asked him, ‘Are you interested in dating Tara?’ And, he said, ‘I don’t know if I want to get involved with all this cultural bit.’” But he did get involved, deeply and quickly. He used to have a little address book, and a couple of days after their first date, he scratched out her surname—Roy—in it and scribbled Strange instead. “I found out like a month or two later,” says Tara. “I was going through his address book, and I was like, ‘My gosh!’ And, he said, ‘I couldn’t help it.’ It was kind of really cute. He is very romantic that way. We both are.”

And, they got married a year later. By that time, they had both transferred to the USC—Tara majored in industrial engineering, and Greg in electrical engineering. While still in college, she started working as a manager for a jewellery company. Greg got into the real estate business, and Tara had eventually thought of quitting her job and joining him, helping him with bookkeeping and working on proposals. She did quit her job, but for an unforeseen reason.

When Tara was 21, she would get into “fender bender accidents” because she was losing pockets of her vision. But, in hindsight, she says she was having trouble with her sight right from her pre-degree days. While walking with her friends, she would constantly look down because the road looked uneven to her. But her friends would brush it aside saying that she was always preoccupied with thoughts and should rather pay attention while walking.

So, Tara and Greg went to an ophthalmologist and got a few tests done. The ophthalmologist referred them to a cornea specialist, who, in turn, asked them to see a retina specialist. “That’s when we started thinking that there is something seriously wrong and it is not just about fixing something with glasses,” says Tara. At 23, she was diagnosed with retinitis pigmentosa, a genetic degenerative disorder that causes severe vision impairment.

When she found out, Tara first went through a phase of denial. “Then I did not want Greg with me just because he was committed to me,” she says. “My parents were initially against me marrying him. We went through a lot to get married. So, I didn’t want him thinking, ‘Oh, her parents almost disowned her for me.’ I didn’t want him sticking around me because he had to.” So, she would do things to push him away, and say the meanest of things to him. “But he just finally told me, ‘You know what, we are going to go through this, thick and thin. I married you for you.’ It is really him being just a wonderful husband and a man that got me through it.”

The couple then went to a retina hereditary specialist, “because if it is a dominant gene, then we were wondering whether we should even have children,” says Tara. The gene was recessive, and Greg wasn’t a carrier. But before they had children, Greg ensured that Tara had seen it all. “He would work just enough so that we could take two-three months out of the year to travel and see all the sights of the world before I lost my sight. This was before we had kids,” recalls Tara. “We travelled everywhere. And, that’s when we knew we were soul mates for life.”

As her vision got worse, Tara went through, what she calls, ‘mini deaths’—like giving up her driving licence, riding a bicycle, working and even walking by herself. It wasn’t easy for Greg, too. “I would often catch him crying in the closet,” says Tara. “He would see me walking and bumping into something and, all of a sudden, I would hear some sound. And, he would hide from me because he didn’t want to upset me. It would just tear him apart when he would see me kind of reaching my hand for something. He was the one watching the gradual decline of my visual impairment from the outside.” Before Tara lost her sight completely, the two used to play a lot of sports—tennis, basketball and football—together. Now, they have found different things to do together, like walking at least three miles daily.

While Greg was her pillar of support through and through, Tara relied on her inner strength, too. She realised she couldn’t crawl into a hole. “If I want to live and enjoy life, I have to figure out how to do this,” she says. “That’s what I decided to do.”She found solace in her favourite quote: With acceptance comes peace after a bitter morning. “I remember that all the time,”she says. “I have to accept my life with this and make the most out of it. There is a peace that comes with the acceptance, but you still have to go through that bitter morning.”

Also, with Greg doing well in his business, they could have personal assistants for Tara. It was just Greg’s way of ensuring that she did not miss out on anything. And, watching him commentate every single move to Tara during Alexa’s matches is a testimony to his unwavering love and commitment. He even built their house, keeping it comfortable and functional for Tara. [Following the 2008 recession, he left the real estate business. He is now into venture capital.]

But even while she had help, Tara would insist on doing certain things on her own, like cooking—she enjoys it and makes all kinds of cuisines—or bathing her kids in the evening. So, her children never saw her as any different initially, except maybe her first-born—Andrew. Tara says he is the most perceptive of her three children. When he was six months old and wanted to give her something, he would grab her hand, open it and place it in the middle and close it. “The professional ayah said that he would do this only with me,” says Tara. “He already knew that in order to give me anything, you have to grab my hand and put it in.”

Little Alexa, however, thought that it was normal for a mother to be blind, and that’s because she had only seen her mom that way. “I think it would have been different if I had experienced her with sight,” she says. It was only when Alexa was eight that she started noticing little things that you can’t do with a mom who’s blind, like getting dressed or going shopping. Tara’s two younger brothers, too, were diagnosed with retinitis pigmentosa, and Alexa saw them lose their sight gradually. She was ten then, and she cried when her mother told her that her uncles were going blind. Alexa says she feels really bad for her grandparents—having three blind kids and losing their eldest child [Suchitra died when she was 23 in the US after she picked up an infection while she was in India].

But what her mother lacks in sight, she makes up for in intuition, says Alexa. “I think they both [Greg and Tara] are more in touch with their intuition than most people are. And, that is why, as people, they connect so well.”

Tara, today, has a clear vision of what she wants to do in her life. She has learnt to use a computer and is currently writing a children’s book. “Did she tell you it is about me?” asks Alexa, with a laugh. For now, mum’s the word for Tara.