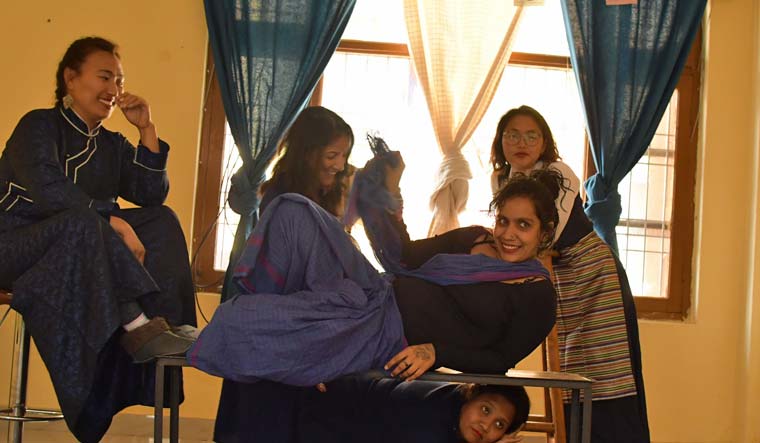 When theatre practitioner Niranjani Iyer was recently rehearsing The Vagina Monologues with her actors in Mcleodganj, she and her team ran out of Indian and Tibetan words for 'vagina'. The Tibetan word for vagina is 'Thu'. But there surely must be other words? The team decided to do a quick survey. One of the female Tibetan actors posted the question online on Facebook: “What are the other Tibetan words for vagina?” The actor posted this question despite disapproval from her boyfriend and her older sister. That the actor stood her ground and did not delete the post was in itself a significant achievement, highlighting the continuing relevance of a play first shown in 1996 to a White Western audience in New York.

The world phenomenon that is the American play The Vagina Monologues has been translated into more than 48 languages since it was first performed in English. Now for the first time, a theatre festival in Dharamshala will present a part-Tibetan adaptation of the seminal feminist play where women speak about their vaginas in a series of first-person narratives around sex, relationships, self-discovery and violence.

The Pocket Company and its artistic director Niranjani Iyer will present the fourth edition of d.r.i.f.t (Dharamshala Residential And International Festival for Theatre) from March 5-8 at The Club House in Mcleodganj. The d.r.i.f.t original of The Vagina Monologues is a mix of Tibetan, Gaddi, Hindi and English and will feature five performers from the local community, including Tibetan and Gaddi-speaking women. "The project belongs to the community per se. The idea being that we need to get as much of a sense of ownership from the local community in this festival," says Iyer about the concept behind this unique theatre initiative where participating groups stay and work together for the entire duration of the festival—cooking, cleaning, setting up, ushering, selling tickets and the works. Tickets prices range from Rs 20-50.

The Pocket Company, a 11-year-old undertaking, has been conducting open play readings in cafes, libraries and bookshops across Dharamshala, and it was in one of these readings that The Vagina Monologues was first introduced to the audience. Based on the overwhelming response, Iyer reached out to Eve Ensler, the original playwright and performer of The Vagina Monologues, for permission to translate and stage the iconic text in the local languages of Tibetan, Gaddi and Hindi, and thus re-contextualize the original V-Day script.

So in the section on 'The Flood'—where a 72-year-old woman confesses to never having seen her vagina with conscious intention—a wet dream about American actor Burt Reynolds is replaced by Rajesh Khanna. For the same section, because it was difficult to get an older actor, Iyer got a gaddi mother to read out this part. "She is the pradhan of a local village here. She can't read or write. We narrated the story to her after translating from Hindi to Gaddi. She then performed it for the camera. So we will be projecting The Flood," says Iyer who plans to take the play to other Gaddi-speaking villages after the festival. To questions like "If you could dress your vagina, what would it wear?" the answer lies in saree, paranda, salwar and chupa (Tibetan dress). The section called "Reclaiming Cunt" has been removed. Here a woman illustrates how voicing the contentious word can be empowering. But Iyer and her team couldn't find a counterpart for "cunt". No more than 10 people in Dharamshala probably use it, Iyer says. The Hindi word "chut" simply did not resonate in rhythm as much as the four-syllable sound in English. Hence, the section was dropped. "The reading of the script itself was transformative for these women. The many conversations that happened considering the Tibetan community is slightly Victorian in these matters... It is also a sort of liberation for the actors performing it," says Iyer about the process of creating The Vagina Monologues in Dharamshala.

Theatre for Iyer has also become a vehicle for bringing together the distinct communities living in and around the Tibetan settlement in McLeodganj. "There is very little mixing of cultures happening here. For the first time in this edition of d.r.i.f.t. we will also have a school play with both Tibetan and Indian children performing in one production," says Iyer who studied theatre and trained and worked in Paris for 13 years before shifting base to India in 2012 as guest faculty at the National School of Drama. She has been visiting Dharamshala as an adolescent and has kept coming back to receive teachings of his Holiness The Dalai Lama and seek Tibetan medicine treatments for her late parents. "The festival is also my way of giving back. I needed to do this. I have been coming here for so long and this place has given me so much," says Iyer.