The Kochi Carnival began on December 8 this year 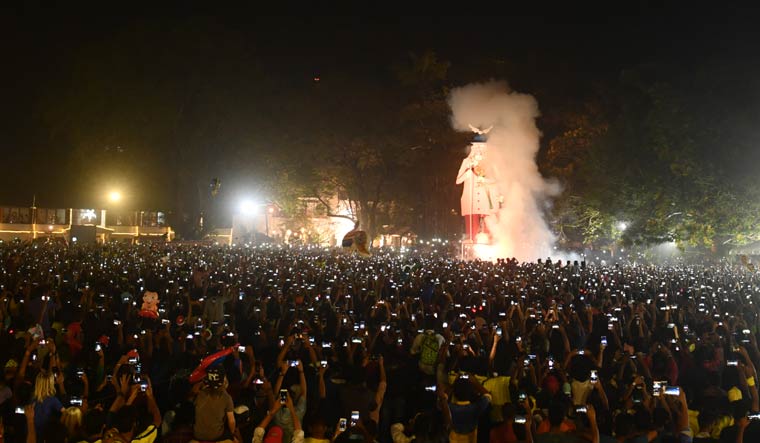 [File] ‘Pappanji’ is set on fire on New Year's Eve, and not Santa Claus | Josekutty Panackal

Fort Kochi is filled with excited people, as they get ready to ring in the new year―the streets are adorned with lights, homes still decorated with Christmas trees, ornaments and stars, and, of course, the burning of the pappanji (meaning old man in Portuguese). At the stroke of midnight, the sirens from ships blare and the pappanji is set on fire, and as it burns away, we put to rest the sorrowful memories and ill deeds of the year that has passed, giving hope for a better tomorrow. Fireworks and an excess of song and dance fill the night till dawn as we welcome the New Year.

The Fort Kochi Carnival puts on quite a show every year, setting the pappanji aflame; but do keep in mind that it is pappanji, the “old man” as per the Portuguese custom, that is being burned and not Santa Claus. N.S. Shaji, general secretary of the Carnival committee, says that it is a misconception that they burn Santa Claus on New Year's Eve. “It is the effigy of a good-spirited old man that we burn and not Santa Claus as people think. We would not burn a saint'a effigy. Such speculations give rise to many controversies”.

The custom of burning the giant, sky-high pappanji has its origin from the Portuguese, Dutch and British influences in Kerala during the 1900s.

The Carnival was first held in the second week of December in 1984 as part of the United Nations’ Youth Year festival. Earlier, the effigy of the happy, good-spirited old man was burnt in several places in Fort Kochi. Later, many local clubs came together, and with the District Tourism Promotion Council organising the whole event, it was decided to burn the pappanji at a common place. With Fort Kochi becoming the hub of art and culture thanks to the arrival of the Kochi-Muziris Biennale, the Carnival has drawn inspiration from artists, giving the new year custom its own twist.

This year, the Kochi Carnival began on December 8 with the laying of the wreath at the War Memorial in St. Francis Church at Fort Kochi. The flag hoisting at Vasco Da Gama square on December 15 was followed by many cultural and sports events conducted in various parts of Kochi.

Every new year starts with a message of peace and harmony. Kochi's way of welcoming is no different; it perfectly reflects the heart-pumping, spirited and never-ending enthusiastic vibe of Kochi.