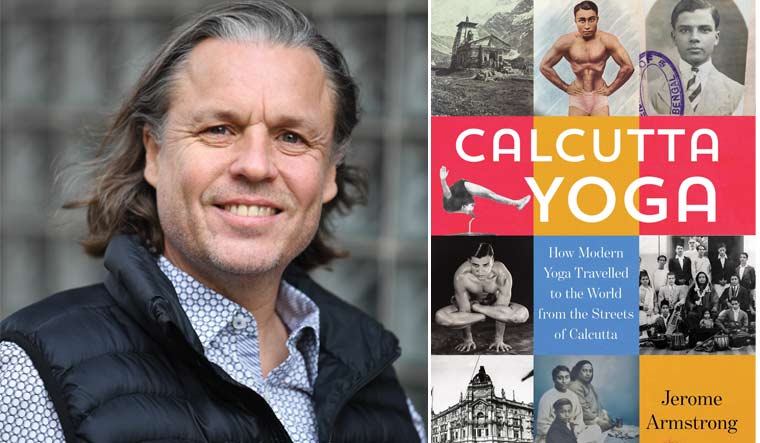 Jerome Armstrong's book 'Calcutta Yoga' focusses on the philosophy of yoga which came from the Ghosh family | Jocelyn Augustino; cover of 'Calcutta Yoga'

At first came Bishnu Charan Ghosh. Strongman, body-builder and hatha yogi, Ghosh is sometimes referred to as the “father of physical culture in India”. Born in 1903 in Lahore, Ghosh had made accessible the ancient science of hatha yoga in the 1950s, almost fifty years before power yoga became a thing. Younger brother to the sage and yogi Paramahansa Yogananda (author of Autobiography of a Yogi), Ghosh set up in 1923 the College of Physical Education in north Calcutta. It is now called Ghosh's Yoga College, a quiet polestar for yoga practitioners and philosophers from around the world. The yoga teacher-slash-showman had many famous students, including Reba Rakshit―a star performer in Indian circuses in 1950s; in her heydays, elephants and cars trudged over her body. And Monotosh Roy, the first Indian to win the Mr Universe title in 1951.

Then came Buddha Bose, Ghosh's most devoted disciple. Born to an Indian father and an English mother, he went on to marry Ghosh's daughter and lived with the family in their north Calcutta home. Both Bose and Ghosh extensively studied and developed an advanced system of asanas, but it was Bose who documented these postures as demonstrations and instructions in a book called 84 Asanas which was published for the first time last year.

But the person who minted the most acclaim based on the teachings of Ghosh and Bose is Bikram Choudhury, the founder of Bikram Yoga which is essentially 26 poses and two breathing exercises performed in the same order for 90 minutes on the trot in a heated studio. He packaged and popularized it as Hot Yoga in the US. Himself a hot-headed, abusive, eccentric, speedo-clad yoga teacher, Bikram found followers globally, including Hollywood celebrities. Bikram is the most famous alumnus of Ghosh Yoga College today, his fame bigger than the college and its illustrious history. But exposed in a series of sexual assault allegations which came to light about five years ago, Bikram's legacy is as contorted as his poses. A new book called Calcutta Yoga will reclaim the much-neglected, fascinating intergenerational history of Ghosh Yoga which precedes the more well-known schools of yoga by Bikram and even BKS Iyengar. Written by American political strategist and media entrepreneur Jerome Armstrong, the book was also used as source material―without attribution―for the historical bits of the Netflix documentary Bikram: Yogi, Guru, Predator. THE WEEK catches up with Armstrong in an email interview in the run-up to the release of Calcutta Yoga.

In an interview dated November 10 last year, you describe how you got interested in the life of Buddha Bose. It was after you discovered a striking photo of Bose in 2014. What was the context of this discovery?

I had practiced yoga since the middle 1980s, first kriya and hatha yoga. And I had heard about Buddha Bose, but what struck me about the photo was wanting to ask questions that no one knew the answers to in the United States. And once I found the unpublished 1938 book by Buddha Bose, the whole project took on a life of its own. It is very interesting, that at the time of when I researched and wrote Calcutta Yoga, it was against the backdrop of the yoga empire of Bikram collapsing. In many ways, the book looks beyond Bikram, to the history of this yoga in Calcutta, and the individuals who were forgotten...To some extent, it is only now, with further translations from Sanskrit, Bengali, and other historical sources, that a more clear representation of how yoga traveled from India to the world during the 20th century is emerging. My book was to focus on the philosophy of yoga which came from Calcutta, and in particular, the Ghosh family. 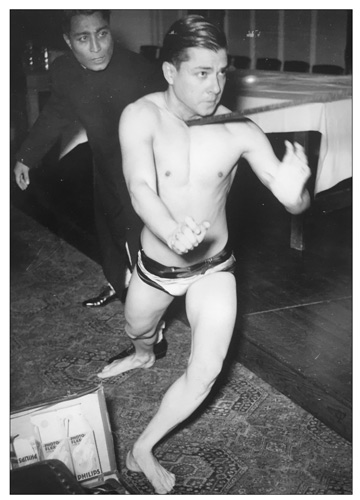 What is the importance of the asanas, as devised by Bose and Bishnu Ghosh, for Yoga practitioners around the world today?

Buddha Bose was a yogic practitioner, whereas Bishnu Ghosh was a strongman and bodybuilder, who had training in yoga asanas during the 1910s at his brother (who thereafter became Paramhansa Yogananda), and then taught those asanas to Buddha Bose around 1930. They are, along with a host of other Indians, such as BKS Iyengar, Pattabhi Jois, Swami Kuvalayananda, Sri Krishnamacharya, Swami Sivananda, Shri Yogendra, Seetharaman Sundaram and KV Iyer), among those who formulated the postures and sequences of asana practice which are followed throughout the world.

Why has history been unkind to the incredible legacy of Bishnu Ghosh and Buddha Bose?

Part of it is that Calcutta, for all its worldliness of architecture, is a fairly isolated place in the world. It is a difficult place to do research and interviews, and though the answer might be staring you right in the face, the difficulty of doing the work has scared off most researchers or reporters, looking to unearth their history. So I don’t think of it as history being unkind; we just had to wait for it to be uncovered, which I attempt to do in Calcutta Yoga. It is a story of how hatha yoga was transformed within India during the early part of the 20th Century, to become more exercise-based, and more accessible to its growing urban populace. And of course, we cannot ignore the role of Bikram Choudhury. Bikram deserves much of the credit for bringing Hot Yoga all over the world, but also, he deserves the scorn for having stolen all of the accomplishments of others, and claiming them as his own in a fantastic made-up story (that none of it is true might not shock you but that all of the stories are lifted from others might).

You lived with the Ghosh family in their Calcutta home to work on your book. How difficult was it initially to get them to open up and share their story until you formed a bond?

Part of why they were open to me was that I was looking at this whole situation with a different perspective. I began by thinking about what I could do to help. For a long time, while Bikram has been atop his world, he’s basically ignored Ghosh’s Yoga College, except for a couple of trips with his older students, and it's been seen as a distant place to imagine traveling to. So one thing I started right away, along with a couple of others, was a ‘teacher training’ event held on site, where foreigners live at the Ghosh Yoga College, just as I did, over a month-long training within traditional therapeutic yoga. So we’ve reconnected the students of this yoga around the world with its source. We also re-published texts within the lineage, written by Buddha Bose (‘39), Bishnu Ghosh (‘61), and Ghouri Shankar Mukerji (‘63), to move beyond Bikram.

How will the book 'Calcutta Yoga' redeem the dignity and transcendental importance of this ancient physical practice at a time when Yoga is relentlessly used as a tool for diplomacy and comes on the back of a litany of controversial gurus and godmen?

The underlying importance of yoga as a physical practice has always been one of dedication (as a daily practice) achieving a spiritual connection (done through the inner solitude), and the mastery of actions in the world one performs. It’s effectiveness is simple, and though desired by many, it is only at the individual level where the practice of yoga changes a person. If it's just words, and rote physical routine, then one has little connection. I share quite a bit in the book about my own personal journey, uncovering these old texts of Calcutta Yoga, and how it changed my practice. The philosophy of yoga is what makes it have such worldwide appeal; not as a part of a religious identity but as an individual method of transformation. It’s up to the individual to break through the cultural clutter to find their own way. 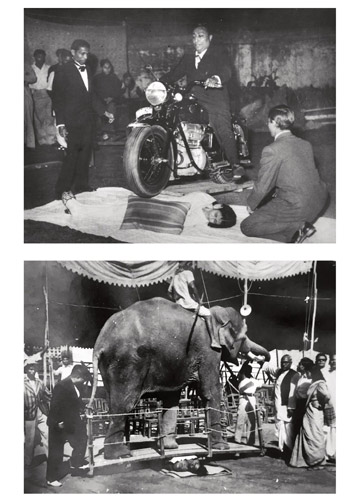 The name Bikram always precedes Bishnu and Buddha in popular discourse, whereas it should be the other way round. What does the Ghosh's Yoga College feel about its association with Bikram Choudhury at this point?

Bikram Choudhury has very little to do with Ghosh’s Yoga College at this time, though of course, he is Bishnu’s most famous student. I think, or rather I hope, this will change over time. Bishnu was a masterful teacher who inspired so many. From my time interviewing his students still alive in Calcutta, I was able to get a closer sense of who he was, how he trained, and I came away from a huge amount of respect, for example, in how they were able to will their strong body to incredible feats of human strength. Of course, some of the stories are too fantastic to believe, but there are photos too; of elephants walking atop a woman named Reba Rakshit, Monotosh Roy winning Mr Universe in 1951, and other circus feats which Bishnu brought to Japan. Hatha yoga was both a practice and a performance for Bishnu’s students.