Nike's co-founder designed these shoes after seeing a waffle iron 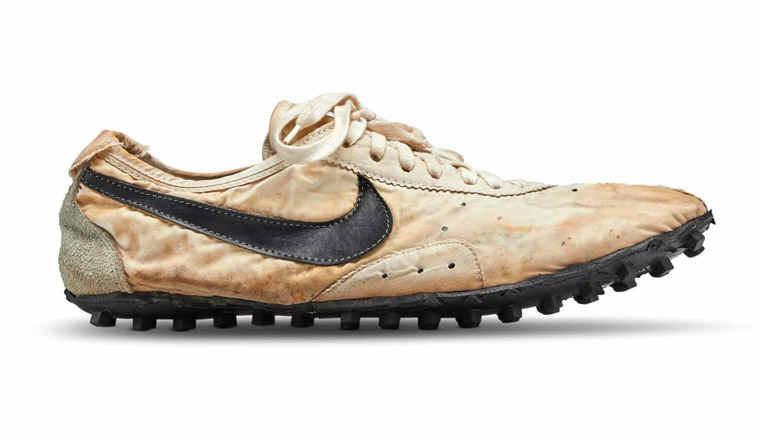 A pair of shoes from 1972 has become the costliest set of trainers in history. Selling for $437,500 (over Rs 3 crore) at Sotheby's in New York, the Nike Waffle Racing Flat Moon Shoes are one set of only 12 in existence, designed by Nike co-founder Bill Bowerman as the next great shoe for American runners at the 1972 Summer Olympics.

The auction was a new one for Sotheby's, who tied up with streetwear marketplace company Stadium Goods to auction 100 of the world’s rarest sneakers — all 100 of which were snapped up by Nadal. The sale beat the old record of $190,373, which was paid in 2017 for a pair of shoes that Michael Jordan wore (and signed) at the 1984 Olympics basketball final.

The shoes are the only one from their collection in an “unworn” condition. Their story dates back to the rise of Nike as a footwear brand, a story set in motion by world war two hero Bill Bowerman, who kickstarted the jogging craze in the United States, co-founded Nike and invented the rubber-soled ‘waffle’ pattern through the use of his wife’s waffle iron.

At the time, running shoes often had spikes in them to aid with grip — an addition that added to their weight. Bowerman wanted a shoe that could grip while being as light as the runner’s feet: He calculated that every ounce (28 grams) of weight that he could shave off from a shoe added up to over 55 pounds (25kgs) over the course of running a single mile (1.6 km).

Bowerman experimented with track runners, giving them shoes made out of everything from kangaroo skin to cod.

He found his method after watching his wife cook with a waffle iron. He poured urethane rubber into the iron, ruined it, and then acquired five more to continue his experiments. The resulting rubber sole pattern was dubbed the “waffle trainers” and later the “moon shoes” because of their resemblance to the footprints left by Neil Armstrong on the moon.

Bowerman designed the shoes for track runners at the 1972 Olympics, for whom he as the coach. However, none of the American runners qualified for the subsequently notorious Munich Olympics — where eleven Israeli Olympic runners were taken hostage and executed by a Palestinian terrorist outfit. Incidentally, at those Olympics, Bowerman was asleep when the incident took place, being woken up by an Israeli racewalker (and Holocaust survivor) who told him what was going on — prompting Bowerman to call the police and shelter him in his room.

Two years after the Munich Olympics, the Waffle Trainers were released to the public for the first time. They proved a massive success, helping build Nike up into a global footwear giant, building their sales up from $10 million to $270 million in the span of a decade. Tragically, the long days Bowerman had spent inhaling chemical fumes as he tried to concoct new materials to build his dream shoe, left their toll on his health — he damaged his neuro system and was later left unable to run, though he had aided millions to do so with his products.

Nadal plans to add the shoes to his ‘Dare to Dream’ museum of classic cars in Toronto.