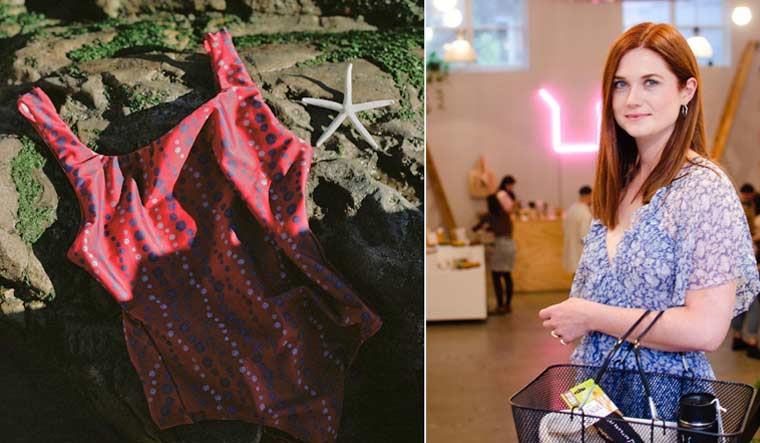 Bonnie Wright, who played Ginny in the Harry Potter series, launched a line of bikinis made out of recycled plastic. | Instagram

Eleven plastic bottles for a pair of men’s shorts, eight for a women’s swimsuit. This is no barter trade — it is instead the process by which Fair Harbor turns recycled plastic into swimwear.

Of the 8.3 billion tons of plastic produced so far, less than nine per cent has been recycled. As the possibilities for sustainable fashion have grown, so has the profile of the people endorsing it. The latest warrior in the fight against a plastic-choked future is Bonnie Wright, who played Harry’s love interest Ginny Weasley in the Harry Potter franchise.

Bonnie, who has long advocated environmental causes, has partnered with Fair Harbor to develop a line of swimwear in the company’s assortment of sustainable clothing.

i’m wearing 11 plastic bottles in a suit i designed. next month you’ll be able to wear it too @fairharbor👙🐠 photo by @nastassiabruckin

The Long Island-based company was founded in 2015, with the goal of reducing plastic pollution in the oceans through a line of plastic-based products. Bonnie’s design line was inspired by the pattern of a sea urchin shell.

“I was inspired by Japanese and Chinese indigo prints for both the pattern and colour of the collection. The pattern itself is inspired by sea urchin shells, an animal I find to have such fierce beauty like the ocean. I wanted the shape and fit of the suits to encourage movement at the beach be it swimming, dancing or surfing!” says Bonnie on the official Fair Harbor website.

Bonnie has championed environmental causes in the past. After years of working with the Greenpeace, she became its official ocean ambassador recently and shared her happiness via social media.

“As an ambassador of the Greenpeace, which had already inspired me since I was a kid, I will be working to help implement a United Nations global treaty to protect a third of our oceans as ocean sanctuaries,” she posted on Instagram.

The plastic clothing revolution in India

There are many companies in India which recycle PET plastic to make fibres, which are woven into different fabrics. There are a few recycling plants in Tamil Nadu which does so. The PET fibre is obtained through a long process and then spun into yarns. This was undertaken by B.P. Sultania, president of the All India Recycled Fiber and Yarn Association. These fibres are cheaper when compared to cotton, reducing the cost of dyeing for the weavers.

The Summer House is a slow fashion brand which sells Econyl Swimwear, clothing made of the plastic waste from fishing gear. “Fishing gear is something which is left under the sea, being a death trap for animals. Econyl gives a new life for it. We source the fabric from the Italian companies who make fabric out of the fish gear. They collect the waste from the ocean, treat and regenerate the material, polymerize it and transform into the fabric. Now there are trade distributors in India for these fabrics” says Shivangini Pandhyar, founder and creative director of The Summer House.

One of the biggest brands to attempt sustainable plastic-sourced fabric is Reliance India Pvt Ltd, which launched T-shirts made of R|Elan™ GreenGold, a fabric made out of plastic bottles, as part of the Lakme Fashion Week Summer/Resort 2018.

As more brands explore the possibilities of turning plastic into fashion, the clothing industry makes progress towards a sustainable future, adding a lifeline for the upcoming generations as well.

Shivangini is optimistic about the future.  “The future seems to be well versed with these kinds of sustainable fabrics, as there are a lot of brands coming up with the idea of it. As plastic turns up to be a solution-less problem, we must find smart solutions to overcome [it]. These fabrics are quite durable and can be reused and recycled. Moreover, it is good enough for variations in climate as well.”