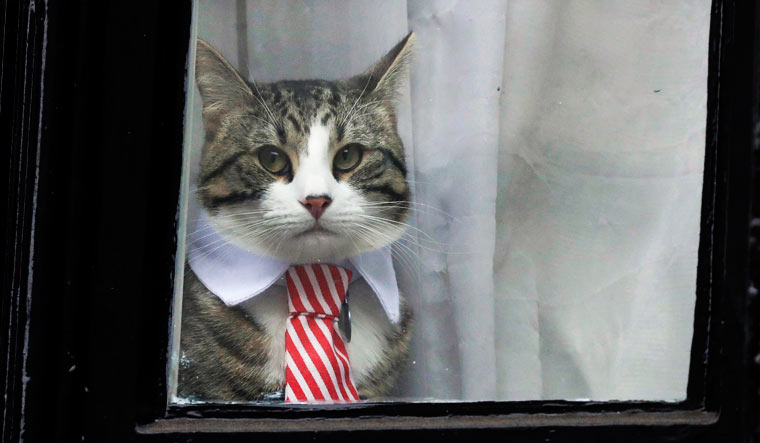 Julian Assange's cat staring out a window at the embassy| AP

The embassy of Ecuador in London has lost two — not one — of its most high-profile guests in recent times. One is Julian Assange, the founder of WikiLeaks, who was arrested on charges of skipping bail in a UK court after seven years of asylum within the embassy. The other is Assange’s cat, better known as Embassy Cat, a social media phenomenon often seen wearing a tie in pictures posted by Assange.

Following Assange’s arrest, internet users erupted into outrage asking where the cat ended up and how it was faring. No new images had been seen of the feline since 2017. Conflicting reports started to emerge, some stating that the cat had been given away to a shelter, some claiming that Assange’s family had taken care of it, and some even speculating that it had died.

But, speculation ended after a tweet from WikiLeaks. The cat, which has social media accounts on both Twitter and Instagram under the handle @EmbassyCat, was reported ‘safe’ by WikiLeaks, which uploaded a video of the feline watching (and turning away from) a video of Assange’s arrest.

We can confirm that Assange's cat is safe. Assange asked his lawyers to rescue him from embassy threats in mid-October. They will be reunited in freedom. #FreeAssange #NoExtradition pic.twitter.com/zSo8RfXXc9

@EmbassyCat has been at the centre of the controversy surrounding Assange’s deteriorating relations with Ecuador. In October of 2018, a nine-page-memo by the embassy was leaked. In Spanish, it detailed numerous complaints that Ecuador had against the Australian hacker, amongst which included a request that he take better care of the well-being, food, and cleanliness of his cat. The document added that if Assange did not take better care of his cat, the Head of the Mission would deliver it to a shelter or to another person.

The memo prompted Assange to sue the Embassy of Ecuador for violating his fundamental rights, claiming the stricter rules were a bid to get him to leave the embassy and face certain prosecution. As reported by Bloomberg, Assange spoke to a court in Ecuador via video-link, even requesting a different translator after his court-issued one failed to get past his Australian accent. The judge ultimately ruled that the embassy was not violating his rights with its requests.

Strangely, there has been no consistent position on the cat's name, which was reported as both Michi and James by different news sources.

@EmbassyCat has met most of the dignitaries and celebrities who visited Assange in his room since 2016.

Here, the kitty can be seen playing with documentary filmmaker Michael Moore, who brought both twine and a drone for the purpose of feline entertainment.

The @EmbassyCat is not the only famous feline in London’s diplomatic circles. The British Foreign Office also boasts the noble presence of Palmerston, “Chief Mouser” of the building.

Commenting on a much-circulated picture of Palmerston during a particularly low day, @EmbassyCat asked if he was depressed, hashtagging #MentalHealthAwarenessWeek in the same post.

Fond of puns, the cat is often called a “counter-purrveillance” agent. In one image, he can be seen pawing over files from the GCHQ leaks of 2016, which revealed how the British intelligence agency tapped fibreoptic cables to monitor global communications.

News of @EmbassyCat’s safety spread like wildfire. The WikiLeaks tweet was responded to with memes, some poking fun at the cat’s seeming indifference to Assange’s arrest.

The cat has long been part of WikiLeaks’ merchandising efforts, with his images sold on laptop sleeves, t-shirts, mugs and stickers. His future fate, for now, seems better than that of Assange, who is presently held in London’s Belmarsh prison.