Half art, half book: The delightful book sculptures of Rajesh Deb 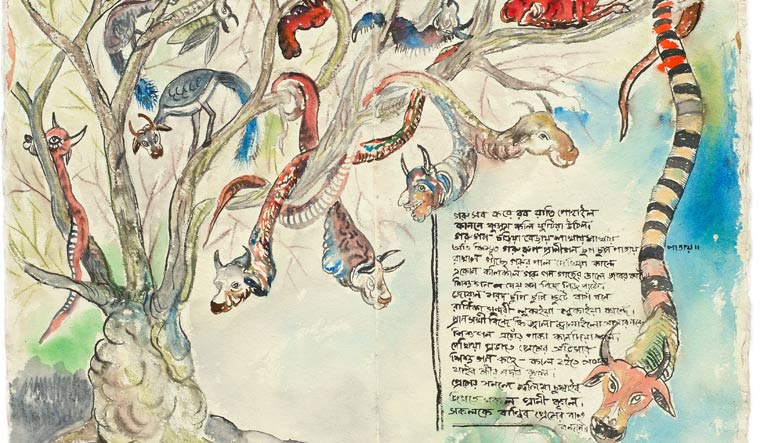 Had Rajesh Deb been a witness to the 106th session of Indian Science Congress, he would have had much fodder for his specialised 'book sculptures'. Given his special interest in the hotchpotch mix of Hindu mythology and science to eject the most outlandish claims, one can only wonder how his art books would have responded to statements like Kauravas were test-tube babies, Lord Brahma discovered dinosaurs or Einstein's theory of relativity was a farce. But for now, one must study Deb's exhibit 'Cow Dung Fantasies', currently on view at Delhi's Shridharani Gallery. It is titled 'Gubletaboli' in Bengali or jumbled, garbled nonsense or a complete goof-up; 'gobbet' as donkey is another variation. In a 8x26 inch book, Deb has bright, intricate watercolour sketches accompanied by text painted in Bengali, weaving black-humoured couplets around the importance of scientific research on dung, milk, urine and the sacred cow. The book is left wide open to show an idyllic rural landscape on one side with saffron-robed sadhus staring into the distance, while on the other page we see delicately painted mooing cows which look somewhat emaciated.

At the Art Book exhibition, seven artists have been invited to create books which can stand as artworks in their own terms. Called livre d’artiste (the artist’s book) in France, they are normally published in limited editions, each copy being individually numbered as to its edition, and is signed by the artist himself. Here artists are inspired by classic or popular literature, poetry, history or myth and respond to them in page after page of a book in a loose, tangential manner.

Combining text and imagery that are graphically integrated, Deb conceives his books in monumental scales, using roughly textured paper with uneven edges, giving off a used vibe. The themes in his books are diverse, ranging from Aristophanes’ The Frogs, to the life of Gandhi, to nonsense rhymes with reference to Rabindranath Tagore. For this show, Deb has created large, three-dimensional ‘sculpture books’ made of acrylic etched with text and images. One is based on the evolution of the Bengali Babu, while the other references the Mutiny of 1857. "I don't just complete my work on a canvas. I use a book format because verbal and visual codes are both inter-related in my work," says Deb.

But the concept of an art book is hardly a novel idea for Deb. Born and raised in Tripura, but currently based in Kolkata, Delhi and Mumbai, Deb has several of these art books which work as satires on contemporary sociopolitical realities. He has been painting and writing them for a long time now, even before he started going to an art college, their size growing as the years roll on. He says he has around 150 handmade art books now, with 50 pages each on an average. "Each book can be an exhibition of paintings by themselves," says Deb. His largest art book is four by seven feet, with close to 30 pages with fantastical tales narrated through paintings and written commentary. "I leave these books at a stage of infinity. Their stories never end, like an open-ended cinema. I never give a conclusive end." His largest art book starts with a museum in Lahore where a burqa-clad lady is seen browsing through exhibits of dead body parts collected from war-torn areas nearby. There she meets another visitor who she recognises to be her rapist from the past. The man in contention then vanishes and starts meditating on the nib of an injection. Every time the syringe goes up, he starts narrating a new story, "Isn't this how most 'rishi-munis' and babas suddenly appear? " Deb asks sardonically. At present, he is working on an art book which will paint stories around the horrid practice of "Mulakkaram" or breast tax which was imposed on lower caste women in Travancore until 1924. 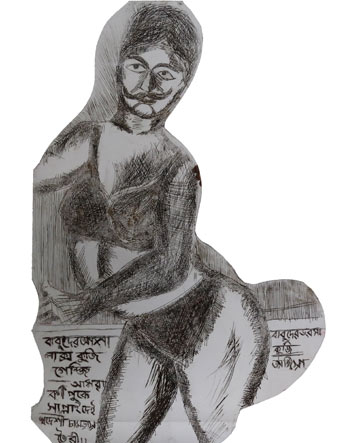 From 'A Book of the Bengali Babu' by Rajesh Deb

Forty-year-old Deb grew up a tiny muffossil town in Tripura called Dharmanagar which had a high concentration of refugees from Bangladesh. Even Deb's parents moved there from Bangladesh after partition. His father was associated with CITU and Left-front politics when he lost his job during the Emergency. He grew up in a social milieu that was always attuned to literature and politics. "There was no drawing book, or art teacher or art school when I was growing up in Tripura. Just ideas and gifts which people from afar got us as visitors," says Deb.

While he has shown his woodblock prints on canvas in previous shows, this is the first time he has been able to showcase his prodigious talent in creating art books. "It has been very difficult sell this idea anywhere. Galleries would say this is not a complete painting and publishers would not consider it a complete book."

The Art Book exhibition will be on view till January 27 at Shridharani Gallery, Triveni Kala Sangam in Delhi.