Journey of sambar: from the Marathas to your plate

Is the sambar originally from south India? Yes? Think again! 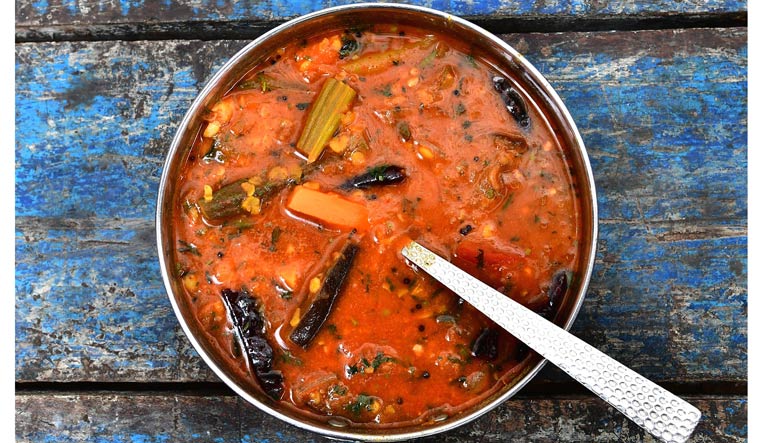 It is just another hot morning. Annas in Mysore and Thanjavur are busy setting up shop. Vegetables are being chopped vigorously, dosa batter is being prepared and milk is being boiled for the quintessential filter coffee. Chettans in Thiruvananthapuram steam idlis, add the last of the grated chillies to the chutney and welcome their customers. It is safe to assume that we’re at a hotel in the lower part of the country, which predominantly serves and perhaps even specialises in South Indian cuisine. And thus, an integral part of this cuisine is the lukewarm brown-yellow concoction that accompanies every dish, right from idlis to dosas to rice (better known as bisi bela bath). You can soak your dosa in it, or the tip of your idli can coyly take a dip. You can mix it with chutney or chug it at one go. You might have your preferences over the method in which it is prepared, but the fact that it’s a wholesome part of your meal (and life) remains, whether it is from Ratna Cafe or Vidyarthi Bhavan.

However, does the sambar, now a worldwide favourite, even originate from the southern part of our country, thus being able to deem it a ‘south Indian dish’?

A confident ‘YES’, is the vox populi. We, however, stand corrected by history. The story goes thus:

Thanjavur, an important art and architecture hub in the state of Tamil Nadu, changed a few hands until it was seized by the Marathas from the Naayaks in 1674. Shahuji Bhonsle, the second Maratha ruler of this district who is believed to have been a culinary enthusiast, was experimenting in the kitchen. While attempting to prepare the Maharashtrian dish amti, he switched 'moong dal' with 'tur dal' and kokum with tamarind. This dish, which was appreciated and relished by the guest of the day―Sambhaji―is believed to have been named after him.

Another aspect of sambar that is quite interesting to explore is the variation of its taste in the south Indian states. While the Kannadiga sambar, which is prepared using a wet paste as a base, is slightly sweet, the Tamilian one, which is made using dry sambar podi, is laden with vegetables such as drumsticks and radish. The Keralites, on the other hand, use more of ‘English’ vegetables like potatoes and carrots in their sambar. Cooks and chefs have also been experimenting with meat as an addition to this concoction. Another tweak to the recipe brought about milk sambar, which is a Jain version of the Maratha dish tambda rassa (made from lamb stock).

Despite this overload of information, it is safe to say that our love for sambar continues to thrive, but just with a little more knowledge of what is on our plate!