At the heart of Bangkok’s Chulalongkorn University stands the majestic Maha Chulalongkorn building. A few years ago, this impressive edifice of traditional Thai architecture had begun to sink and hydraulic cranes were brought in to add support. But my point of interest lies elsewhere; it was in Room 105 of this building that Rabindranath Tagore delivered a talk on child education, on October 13, 1917. While touring southeast Asia, Tagore spent a week in Thailand (then Siam). In addition to his mission of cultural outreach, he hoped to raise funds for a chair of Buddhism in Visva Bharati. The Thai Royal family and government went out of their way to treat him as a distinguished visitor, the Siamese foreign minister consistently introducing him as a world poet.

Tagore’s itinerary makes for interesting reading. He met elite members of the Siamese society—both men of political heft and cultural achievement—including the king’s uncle, Prince Damrong, known as the father of Siamese history. He visited the most hallowed temples and delivered several talks, including on “Chinese birth” at a Chinese community reception. In fact, he made it a point to meet overseas Chinese associations across the region, convinced that cooperation between India and China would lead to the flowering of the east. In his Bangkok speech, he expressed the hope “that China and India will draw closer together in spiritual and cultural unity which is the best that we can share, or contribute to the world”. 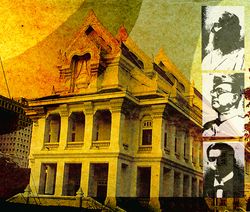 Tagore was deeply impressed by how well Indian religion, particularly Buddhism, and Indian language had been adapted and preserved in Siam. Expressing this sentiment in verse, he compared India to a “deserted shrine” whereas Siam was still “the shelter to the endless glory of India”. Naturally, he was quick to respond to King Prajadhipok’s request for an Indian scholar to be permanently stationed in Siam.

Tagore chose Prafulla Kumar Sen, or Swami Satyananda Puri as he was known after being ordained as a sanyasi. A scholar of philosophy and Sanskrit, the Swami soon became a cultural ambassador, bringing out the monthly Voice of the East. Quickly mastering Siamese, he published several books in that language including a translation of the Gita as well as biographies of Mahatma Gandhi and Guru Gobind Singh. The Thai-Bharat Cultural Lodge, which he started in 1940 as a hub for community and cultural affairs, is active to this day.

Ever since the Ghadar movement, the east had been a theatre for India’s freedom struggle. In the early 1940s, the Indian Independence League led by Rash Behari Bose enjoyed Japanese support. Uncomfortable with the Japanese involvement, the Swami founded the Indian National Council and started a correspondence with Subhas Chandra Bose, wanting him to become the leader of the freedom struggle in the region. Unfortunately, the Swami died in an air crash in 1942, while on his way to Tokyo to attend a session of the League.

A year later, Subhas Bose arrived in Singapore and took over the leadership of the League. He visited Thailand for the first time in July 1943 and sought permission for the Indian National Army to travel to Burma through Thailand. He would travel to Thailand at least seven times during 1943-1945, including just two days before his fatal air crash near Taiwan. The neat arc of the journey of these three gentlemen from Bengal comes to a full circle at Chulalongkorn University. Right across from where Tagore spoke, and close to where the Swami taught, is the auditorium, only half hidden by the leafy chamchuri trees, where Subhas Bose, too, delivered a public talk.