Mystery of the bogie S6 inferno 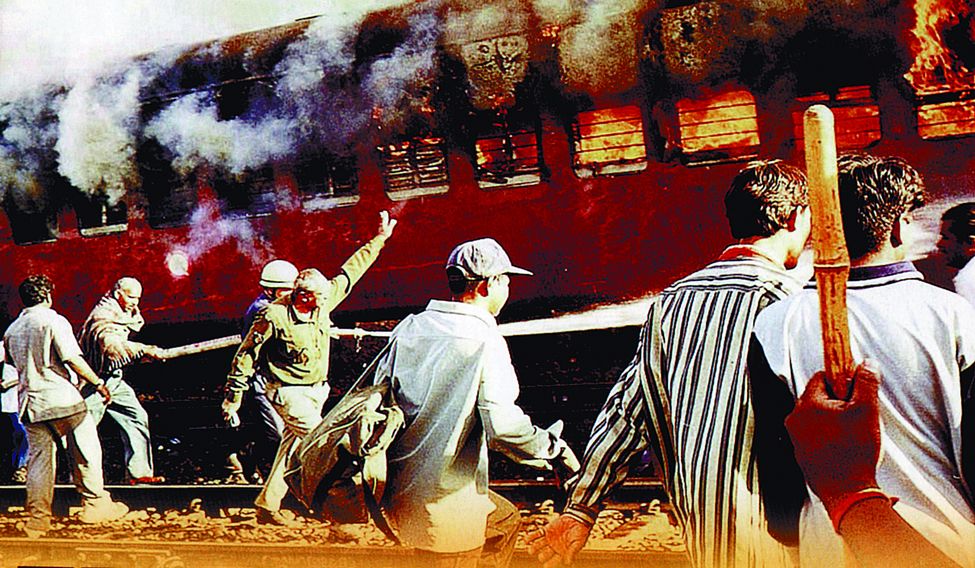 Investigations into the Godhra train carnage have come up with startling revelations. The report by the forensic science laboratory says that coach S6 of the Sabarmati Express was not torched from outside, trashing a widely-held belief, used by many to justify the brutal retaliation against the community whose members were involved in the attack on the Sabarmati express on February 27. Four months later, the probe has raised searing questions about the entire episode. The sleuths have already thrown the ISI conspiracy theory out of the window. Many other questions remain. What really happened on platform No.l? Who pulled the chain as soon as the train left the Godhra station? Have onlookers been arrested while the real cuplrits fled? And the most crucial question: who struck the match that ignited terror in Gujarat and beyond? As the smoke clears, the investigators expect to discover more embers of truth in the charred remains.


It was nothing unusual for Rajendrarao Raghunath-rao Jadhav, 48, an engine driver with the Ratlam railway division, Madhya Pradesh. Around 3.30 a.m. on February 27, he was woken up by the ring of the telephone. The driver of the Sabarmati Express on the Ratlam-Baroda section had not reported for duty and Jadhav had to rush. The train was already running behind schedule.

The train left Ratlam at 4.50 a.m. with Jadhav taking charge along with assistant driver Mukesh Pachauri and guard S.N. Verma. It arrived at Godhra railway station platform no.1 at 7.40 a.m.

Five minutes after the train began chugging out of Godhra, somebody pulled the chain. Only four or five coaches had moved out of the platform. The assistant driver attended to the chain pulling which occurred in four coaches, and the train resumed its journey. But when the engine reached the Godhra A-cabin Jadhav felt the vacuum drop. The train ground to an abrupt halt.

A mob surrounded the train and pelted stones at the engine. "Utaro to kapi nakhish (If you get down we will cut you to pieces)," threatened the men armed with sharp weapons and sticks.

The nearly 1,000-strong mob came from the direction of a mosque, visible beyond the trees and bushes along the railway tracks. The mob rained stones on the train and set on fire coach S6, killing 59 people, recalled Jadhav in his statement recorded in three parts on February 27, March 3 and April 16. Jadhav is the main complainant in the interim chargesheet on the infamous Godhra carnage, which triggered the worst-ever backlash against Muslims in Gujarat. About 1,000 lives were lost in the ensuing communal riots.

However, four months after the incident, investigators are still looking for vital clues. They have dismissed the theory that Pakistan's Inter-Services Intelligence (ISI) was behind the incident. During his recent visit to Gujarat, Union Home Minister L. K. Advani said the Godhra incident was not a pre-planned terrorist act, only a pre-planned move to create disturbance.

The Week is privy to vital documents in the chargesheet which throw some light on the 'pre-planned move'. Most interesting are the findings of forensic experts based on an on-the-spot inspection and reconstruction of the incident. "Considering the time factor (hardly 45 minutes after the train left Godhra station), intensity of fire and the damage it caused to material objects, around 60 litres of highly inflammable liquid was used to burn coach S6," states the report by Dr M.S. Dahiya, assistant director at the Ahmedabad-based forensic science laboratory.

Dr Dahiya, who, along with scientific officer M.N. Joshi, re-enacted the incident with a railway coach at the spot of the crime, however, concludes that no inflammable liquid was thrown from outside into coach S6. Nor was there any possibility of it being splashed inside from the doors.

The height of the coach windows from ground level at the crime spot was found to be seven feet, which made throwing of inflammable liquid using a bucket or jerrycan next to impossible. The experts tried this from a three-feet elevation, some 14 feet away from where the coach was burnt. Hardly 10-15 per cent of the water used for the purpose got inside the coach, the rest spilling over to the tracks.

"Under such circumstances, coach S6 should have caught fire from outside, the fire engulfing it from below, with the inflammable liquid pooled around the tracks. But the inspection of the tracks and burning pattern on the exterior of coach S6—which had no burn marks below the window level—confirm that the inflammable liquid did not come from outside."

The experts also poured nearly 60 litres of water inside the coach and found none of it spilling over from the open door or reaching the toilets. The report finally concludes that to bum the coach, in the February 27 pattern, 60 litres of inflammable liquid had to be splattered inside the coach using a big container from the passage adjoining seat no. 72. Whodunit? Only further investigations will tell.

The inspection report confirms heavy stone pelting on the burnt coach from the southern side of the tracks. Stones were also found scattered inside the coach. The window panes on one side had been shattered by stones while those on the northern side had melted in the fire.

Three doors of the coach were open at the time of the incident. This again is at variance with the initial statement that all doors had been bolted from inside. All windows were closed. There was no attempt to break the window grills from outside. They had been broken from inside or had melted in the fire. The burning pattern inside the coach, its spread, intensity and effect on the floor, described as 'alligatoring' pattern, indicate that the fire spread rapidly, burning 80 per cent of the coach. There was no evidence of
acid-like, quick burning liquid being used, according to the report.

The engine driver's statement does not throw light on the way the coach was set afire after the train was stopped at the Godhra A-cabin. Neither is it clear on the events which took place after the first chain pulling. Panchmahals district superintendent of police Raju Bhargava had received a message around 8.10 a.m. that the Sabarmati Express, in which karsevaks were travelling, had been stopped at Godhra railway station and stoned by people from the Signal Falia area adjoining the railway tracks.

When he reached the station, he learnt that the train had departed but was stopped again near Godhra A-cabin. One coach had been set on fire. On reaching the spot, he found the coach on fire and many passengers on the tracks.

The mob had dispersed but the karsevaks who got down from the train appeared furious. A large number of people, apparently from Signal Falia had gathered after the Railway Protection Force and Gujarat Railway Police opened fire to disperse the mob. In his eyewitness account, Bhargava further recalls having met Mohammed Hussein Kalota and Haji Bilal, now prime accused in the case, near the scene of the crime.

Bilal's appearance, the officer felt, could further incite the angry karsevaks. Kalota was promptly asked to take Bilal away from the spot.

Haji Bilal Ismail Sujela was later pronounced the prime suspect behind the train carnage and arrested on March 16 from a Godhra slum. An independent member of the Godhra municipality and chairman of its planning committee, Bilal has a criminal record with at least 10 cases against him. The slightly built, bearded man was once a pickpocket and also ran a ring of gambling dens in Godhra, according to the railway police records. The police also arrested Kalota, former president of Godhra municipality, and 51 other local Muslims, majority of them from the Signal Falia ghetto.

Bilal and Kalota subscribed to the Tablighi Jamaat doctrine that focuses on Islamic identity and culture. The doctrine promotes the agenda of terrorist groups like Harkat-ul-Jihad-i-Islami (Huji). Two preachers from north India are said to have spread the Tablighi Jamaat doctrine through a network of seminaries in Godhra. Interestingly, in the chargesheet, Hashim Firdaus Reza from Patna and Anwar Abdul Rashid Ansari from Uttar Pradesh, have been reported 'released under section 169 of CrPC.'

Some passengers, listed as witnesses in the chargesheet, spoke about the rowdy behaviour of the karsevaks. "We were forced to sleep on the passages despite having valid reservations," stated a passenger.

The evidence provided by Sajjanlal Mohanlal Raniwal, the ticket examiner on Sabarmati Express, mentions how he was stopped from entering the coaches by activists of Vishwa Hindu Parishad and Bajrang Dal, who had forcibly occupied the reserved seats. Raniwal was forced to spend the night in the guard's coach.

Raniwal witnessed an altercation between karsevaks from coach S6 and some others on the Godhra platform before the train left the station. But none of the statements mentions what exactly happened on platform no. 1 during the train's five-minute halt, widely reported as an altercation between karsevaks and Muslim vendors from Signal Falia. Nor do the documents throw any light on what took place after the chain pulling and how long the train was detained before it finally left platform no. 1.

The assistant driver reported to the engine driver that the alarm chain had been pulled in four coaches but he did not know who had done it.

Advocate Yusuf Charkha, who is representing Bilal and Kalota, says the chargesheet is silent on important events preceding the actual burning of coach S6. There are no details on the altercation between the karsevaks and Muslim vendors on the platform. The karsevaks refused to pay for the tea and abused the vendors. A few minutes after the train moved, the alarm chain was pulled, and a few hundred Muslims gathered at the station and started pelting stones at the karsevaks, who also retaliated. Timely intervention by the railway police prevented further untoward incidents and the train left after a few minutes. Hardly a kilometer from the station, it was stopped by an armed mob. Someone had pulled the vacuum pipe.

"Those arrested are not the real culprits," says Charkha. "As the DSP's statement indicates, many from Signal Falia had gathered as onlookers when the coach burnt. The real culprits had escaped even before the police arrived on the scene of the crime."

Gujarat Home Minister Gordhanbhai Zadaphia refused to comment on the chargesheet or the progress of investigation. Top officers of the state crime investigation department said the 'grey areas' existed because the interim chargesheet had to be filed within 90 days of the incident. Further investigations were on.

Girish Patel, a leading lawyer in the Gujarat High Court and prominent human rights activist, said: "If there is any incident that requires an independent and thorough investigation, it is the Godhra train carnage."

He is critical of politicians like Zadaphia, who made public statements within hours of the tragedy supporting the VHP-Bajrang Dal theory that the train carnage was a 'manifestation of Islamic fundamentalism' and part of an ISI conspiracy.

The chargesheet has been filed against 98 accused, 54 of whom have been arrested (all except one from Godhra) and sent up for trial. It's voluminous, with 1,300 pages, and as investigations proceed additional pages will be added, which may throw more light on what actually happened inside coach S6 on that fateful morning.