For Kolkatans, Christmas is incomplete without the fabled cake

It is only a few evenings to Christmas. If you are a seasoned inhabitant of Kolkata, you won’t need a map or GPS to guide you to your nearest bakery this time of the year. For these are the brightest dots in a city shimmering with Christmas lights. From towering Christmas trees to larger than life Santa Claus figures, from stunning window displays to makeshift stalls creaking under the weight of baked goodies, each bakery large or small stands out from a mile away.

Except one, which stands out each day of the year, whether it’s Christmas or not. Nahoum and Sons, a bakery heaven lovingly nestled amid the labyrinths of New Market, stands out for remarkable reasons.

To begin with, it is the last surviving Jewish bakery in the city. In 1902, the confectionery business was started by a Baghdadi Jew, Nahoum Israel Mordecai. What started as door-to-door sales of cheese and baked goods expanded eventually, and found a permanent address in shop number F-20, New Market, in 1916. Israel’s grandson David Nahoum not only ran the bakery successfully for decades, but was also the much-loved leader of the rapidly thinning Jewish community of Kolkata. The other grandson, Isaac Nahoum, took over after David passed away in 2013. But no matter which Nahoum has been at the helm, Nahoum’s itself has remained exactly the way it was born hundred odd years ago.

Which brings us to the other, perhaps even more unique feature of Nahoum’s— the more everything around the bakery changes, the more it stays the same. The Belgian teakwood and glass facade has remained unchanged since inception, and time has stood still inside its rectangular perimeter. When innovatively and sometimes outrageously themed restaurants and confectioneries are mushrooming every other day in the city, when even heritage addresses like Flurys are renovating themselves, Nahoum’s has always held the concept of a makeover in proud contempt. “So many new places are coming up all around. Do you see us bowing down to the pressure of competition?” scoffs Jagadish Chandra Halder. This gentleman has been the manager of the bakery for almost four decades and is palpably and proudly indoctrinated in the Nahoum’s way of life.

A way of life reflected in his rather shabby but quietly elegant surroundings. The glass shelves that double up as the walls of the store are inexplicably empty, except for a few cakes arranged artlessly here and there. The real goods are heaped on a marble table inside the store. The showcases inside are nearly vacant too, dotted only occasionally with little packets of colourful marzipan. The only nod to the time of the year is a small and dusty Christmas tree perched on top of a showcase, but it looks more like an afterthought than a glittering centerpiece. This is no new age Instagram worthy hangout comparable to a glamorous diva. Instead, Nahoum’s brings to mind an old lady, at peace with life. A lady sure of her inner worth, who does not hide her wrinkles behind a cosmetic mask.

I asked Halder about the legendary rich fruit cake of Nahoum’s, a specialty without which Christmas is incomplete in many a Kolkata household. He obviously expects to be asked about it, and starts rattling off mid-question, “The half-kilo cake costs Rs 450, the one kilo fruit cake Rs 900. We take advance orders for cakes bigger than that.” Legend has it that when the Archbishop of Canterbury Geoffrey Fisher was visiting Kolkata, he had been served Nahoum’s fruit cake and had declared it the best he had ever tasted.

Closer home, late Bidhan Chandra Roy was famously fond of the Nahoum’s signature creation. As was screen goddess Suchitra Sen. Former India captain Sourav Ganguly, a self-confessed foodie, cannot imagine December without the rich fruit cake of Nahoum’s. The Prince of Kolkata had once been presented with his favourite cake moulded in the shape of a cricket bat, informs the manager. Noted musician, director and actor Anjan Dutt considers the Nahoum’s factory (behind New Market) a tourist attraction no less than Park Street. Veteran actress Sandhya Roy prefers to drop by in person, and pick up her favourite Nahoum’s goodies. “She has a different kind of relationship with us. Each time she drops in, she makes sure to ask after our families, our health,” said Halder. 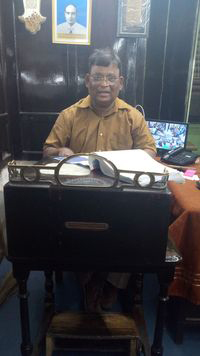 Manager J.C. Halder sitting at the wooden till which will turn hundred next year | Priyadarshinee Raksit

He talks equally lovingly of their piece de resistance, the rich fruit cake. Made from a well-guarded family recipe, the cake owes its rich moistness not to liquor, but generously used raisins. The winter months from December to February bring out its best taste. “It doesn’t taste the same in summer, you see,” said Halder, almost as if describing the idiosyncrasies of a favourite grandchild.

A lesser known sibling of this fabled fruit cake is the light plum cake, baked especially for those who do not like their cakes too rich. Nahoum’s is one of the few confectioneries in Kolkata that still makes authentic Easter eggs. On Jewish holidays, Nahoum’s makes specialties like baklava and cashew rings as well. Their Madeira cake, macaroons, marzipan candies, cookies, brownies and rum balls are equally popular. Maintaining perfect balance amidst all this sweetness are savoury delicacies like cheese samosas, vegetable patties and garlic bread.

At Christmas, however, they are all overshadowed by the rich fruit cake. Such is the demand for this humble looking piece of bliss that Nahoum’s stays open an extra two hours during the winter festive season, to satisfy as many hungry souls as possible. Yet they are staunch non-believers of modern technologies of storage, which could have enhanced the shelf life of their coveted products. “That kind of storage affects the taste, and we cannot even dream of compromising with quality,” said Halder, with a firm shake of his head.

All the while he has been sharing these sweet nuggets of information, the manager of Nahoum’s has been busy keeping the till as well. All around him, hot cakes have been flying off the shelves, acting out the age old idiom. As I ask for his permission to take a photograph, Halder signs off, “Make sure you include the cash till in your frame. After all, it will celebrate its hundredth birthday next year.”

Of course it will. And if a century of change has not been able to erode the Nahoum’s way of life, it is safe to say that the next hundred years will be equally futile in similar attempts.

At the end of the day, is it really remarkable that an entity that deflects mutability is thriving in 21st century Kolkata? In a city that looks wistfully back at its past more often than not, Nahoum’s is serving them their very essence, in deliciously tangible form. Kolkata is a city that lives and breathes nostalgia. And thanks to institutions like Nahoum’s, happily eats it too.