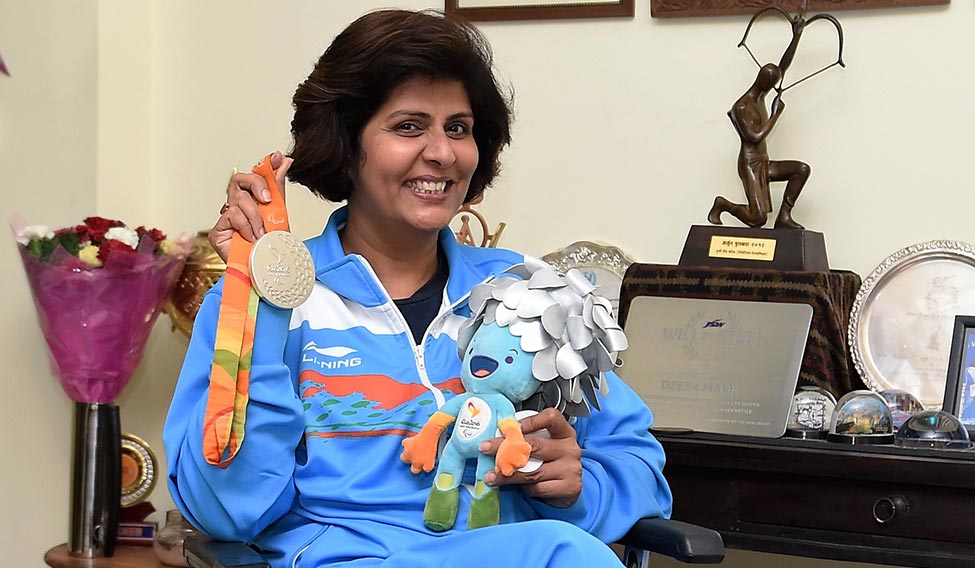 When she was six, Deepa Malik was diagnosed with a spinal tumour. But that did not dampen her lively spirit. It only motivated her, and she continued playing outdoors, soon finding her first love—bikes. She went on to play a variety of sports, and began a long and tough journey that culminated in a silver medal at the 2016 Paralympics in Rio.

As she threw the shot 4.61m from her wheelchair, she broke her personal records as well as stereotypes. Luminaries, from Prime Minister Narendra Modi to cricket legend Sachin Tendulkar, congratulated her on Twitter. She had created history by becoming the first Indian woman to win a medal at the Paralympics.

Her road to Rio, however, had several hurdles. After the initial diagnosis when she was six, Malik was asked to undergo physiotherapy. In a couple of years, she recovered and resumed normal life. During her teenage years, she rode bikes, swam, played basketball and made the state cricket team. She got married to Colonel Bikram Singh Malik in 1992 and had two daughters, Devika and Ambika. Sports kept her busy even after marriage, perhaps more so than before. However, at the age of 26, there were signs of a tumour and, after a paralytic stroke, doctors gave her a grim prognosis—remove the tumour through surgery and suffer paralysis or let it grow and face certain death. She chose the former.

So, in 1999, seven of her degenerated vertebral discs were operated upon. This was the toughest phase of her life. Her husband was fighting in Kargil and she had two daughters to take care of. She went to the Army Research and Referral Hospital in Delhi for treatment, leaving her daughters with her mother. Later, her family joined her in Delhi, where they lived till 2013, before moving to Gurgaon.

“Everybody asks me how I managed. I think I just made the right choices,” she says. “Preparing myself to go into the surgery, understanding that my husband was away on duty, not letting any melodrama come into my life, and being brave enough to handle the hardships. The fact that I have turned into an achiever is because I never gave up.”

After 31 surgeries and more than 180 stitches between her shoulder blades, Malik was left paralysed from the chest down. “No one in my family, be it my parents, husband, in-laws, brother or children, really made me feel disabled,” she says. “They did not change their attitude towards me. They continued loving me and having faith in me.”

In a few years, as part of her recovery, she took up swimming. She started participating in para sports in 2005 and focused on swimming, shot put and javelin throw. She chose shot put as she wanted to strengthen her upper body. In 2010, with a bronze in javelin throw in Guangzhou, she became the first Indian woman to win a medal in the Asian Para Games. She also won the Arjuna Award in 2012.

“Sports was one of the steps I took on my journey of ‘ability beyond disability’,” she says. “When I got an opportunity and learned that there are sports for people like us, I grabbed that opportunity because I felt that if I did the same training activities in a sports field, swimming pool or gym, I would not be called a patient.”

She also joined the Himalayan Motorsport Association and Federation of Motor Sports Clubs of India (FMSCI) and biked 1,700km in eight days in sub-zero temperatures, sustaining herself in extreme climates at an altitude of 18,000 feet. Besides this, she entered the Limca Book of Records four times, for crossing a 1km stretch of the Yamuna against the current in 2008, covering 58km on a special bike in 2009, doing the longest pan-India drive by a paraplegic women (Chennai to Delhi 3,278km) in 2013, and driving across nine high altitude passes in nine days on Ladakh’s highest motorable roads. She was the first woman in the world with her disability to attempt a journey like this in 2011.

However, for the Paralympics, beyond her will power, she needed professional guidance. So, in 2013, at the Siri Fort Sports Complex in Delhi, a friend introduced Malik to Vaibhav Sirohi, who later became her coach. “I not only trained her, but also put her on a strict programme, which included skill practice, a diet plan and strength and conditioning,” he says. “She followed the plan and also managed to improve her performance. Before her trials, she managed 4.37m and during the trials, she improved and reached to 4.48m, which was a significant progress.”

In 2015, Deepthi Bopaiah, executive director of GoSports Foundation, a private organisation that supports athletes, met Malik at a motivational event and told her that the foundation would support her. “GoSports came at a time when we received huge funding from the government,” says Malik. “The Target Olympic Podium Scheme gave us a lot of funding, but there were expenses that were not defined in the scheme. GoSports gave backend support.”

Said Bopaiah: “Before the Paralympics, Deepa wanted to participate in the Desert Challenge Games, part of the International Paralympic Committee’s Athletics Grand Prix in Arizona, US, to get international exposure. She was with her trainer Vaibhav Sirohi. We funded their trip to the US. Also for Rio, the government allowed only one person to travel with the athletes. Her escort for the event was her husband, who also happens to be her skills coach. But she also wanted Vaibhav to travel with her. GoSports funded his travel to Rio.”

Even though she had a fantastic experience, says Malik, the journey to Rio was full of roller coasters, and the last phase was especially crazy. “First  , I was really low in the ranking when I qualified,” she says. “Then, I had to pump up my performance, almost by a metre. So began this whole struggle of getting a diet programme, giving up my favourite food, getting into a regular regime, cutting myself from social circles and sacrificing my leisure time with family and staying away from home. But the medal came as a sigh of relief.”

Now, with the accomplishment, Malik says that her life has changed significantly. But, more than fame and fortune, it was to complete her sporting journey that she participated in the Paralympics. “I also thought that if I’ll do well here, it will give me an opportunity to contribute to para sports,” she says. “It strengthens my voice when I speak of the contribution of sports in the life of people with disabilities. It is all about mind over body, ability beyond disability and definitely, on a personal level, it is a huge achievement to play an Olympic-level sport and win a medal.”