Travelling around India in 80 trains 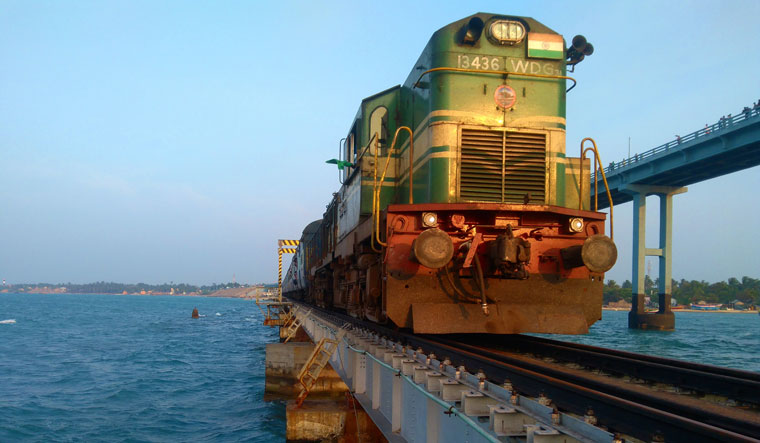 A warm breeze swirled through the carriage carrying the scent of frying coconut. As the Island Express jerked and jolted its way down the Malabar coast, my stomach growled, and I edged towards the aisle dreaming of fish moilee and appam as giant waxy leaves thwacked against the window, twigs snapping off through the bars. From my seat, I peered between the branches at clusters of villages, houses painted the colour of cotton candy, and listened to the distant toll of church bells. Locals sat in the shade playing cards; they raised their palms in greeting, beedis between thumb and forefinger.

In four months I had travelled on almost 80 trains around India and was still in thrall to the way in which they could burrow into the nooks and crannies of the country, inching through jungle, skimming coasts, climbing towards hill stations and cutting deep into the guts of cities. No other form of transport laid bare a country with such verve and flair.

When I set off on my journey, I knew that the Indian Railways had more than 12,000 passenger services every day, rolling on 40,000 miles of track. But I never imagined that the trains could take me almost anywhere I wanted to go—to see the Golden Temple at dawn, to spot tigers in Ranthambore, and to taste tea at an estate in Ledo, Assam.

One afternoon, I decided to see how far north the track extended from Jammu Tawi station and boarded the train to Udhampur with a hot omelette sandwich in hand and no clue about what I would do once I got there. In just over an hour the Jammu Mail drummed around the rocky faces of the Shivalik mountain range, circling wide-mouthed rivers the colour of chocolate milk. It disappeared in and out of flimsy tunnels, clattering across 158 bridges. 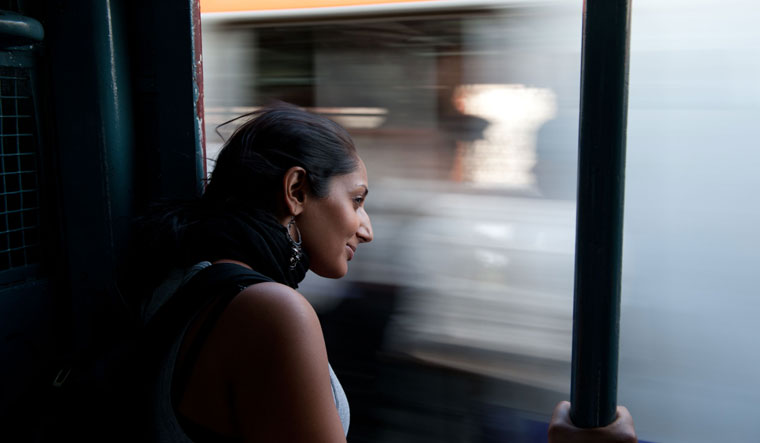 Into the distance: Monisha Rajesh in a Mumbai local

On the approach to Udhampur, the land flattened out into meadows, the sky a sad and soulless white. Passengers disembarked in the rain, holding carrier bags on their heads, as they made for the exit. Soaked, I picked my way through the wet clay and followed the final strip of track until it tapered off into the dirt. The station emptied. There was nothing left to do but board the same train, wait for the engine to rev and shudder and return to Jammu, but it did not matter to me; the joy was in the journey.

However, as much as I relished the rickety old trains—paint peeling from the walls, fan wheezing overhead, the carriages wearing belts of rust round their waists—I had no idea of the luxury that lay in wait. For so long I had been indoctrinated by the post-colonial puff of BBC documentaries fixated on passengers riding on the rooftops and the Victoria Terminus heaving at rush hour, to realise that India does extravagance, opulence and flamboyance like nowhere else on earth—especially on the railways.

Boarding the Indian Maharaja Deccan Odyssey in Mumbai, now known as the Deccan Odyssey, I was instantly relieved of my bags by Benoy, a butler in a white suit, who garlanded me with wet marigolds and showed me to my suite, which smelt of fresh sheets and old dust. On the double bed, four pillows puffed out their chests with pride and a snip of hibiscus lay in the middle of the tight white duvet, along with a note that read: “Welcome aboard a journey to the depths of your soul”.

Along with not one, but two flat-screen televisions, the carpeted living area comprised a chaise longue and a carved wooden table, upon which was a silver platter stacked with fruit. Two bathrooms flanked the room, both fitted with showers and the added luxury of constantly running hot water. Even the compartments on board the Venice Simplon-Orient-Express contained nothing other than a mahogany wash basin, forcing passengers to go without showers and queue up sheepishly for their morning ablutions.

In preparation for lunch, diners swayed up the corridor amid the clink of gin and ice cubes and were greeted by white-gloved waiters performing all kinds of gymnastics in an effort to hold steady their trays of crystal and cutlery. A thali arrived with a tower of biryani in the middle, topped with a papadum that opened like a lotus to reveal salad, clustered and shining like a jewelled brooch. Everywhere I walked I was greeted with deep bows, the smell and sight of rose petals, even the skin-soft feel of them scattered on my bed in the evening. Over seven days and nights, I was brought tea and biscuits in bed, my coasters were changed while I read, my clothes pressed while I slept, and my expectations surpassed beyond belief. 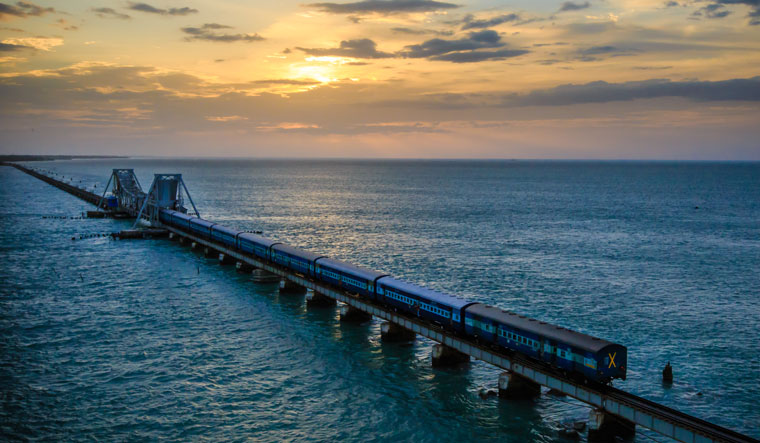 Chugging along: a train passing through Rameswaram in Tamil Nadu

Travelling for four months, along 25,000 miles, I developed a stomach of steel and, to my surprise, a taste for vegetarian food. Carnivorous by nature, I found myself gravitating towards freshly-fried bondas, hot vadas on foil plates and crisp dosas scraped up and folded over with dollops of cold, creamy chutney.

I began to talk to my fellow passengers about the on-board food, picking up tips on the best dhabas for chana bhatura in Chandigarh, the cleanest hawkers for pani puri in Chennai, and the stations with the softest idlis. It was not long before my train journeys took on a gastronomic twist and the routes began to morph into a culinary quest.

One afternoon, I boarded a Mumbai local to Vile Parle West and went in search of Mithibai College, opposite which is Anand stall, famed for its vada pav. Under a green and purple awning, already surrounded by a mob of students from across the road and couples perched on motorbikes, the vendor was frying, flipping, slicing, buttering and spreading faster than the human eye could see. I waited impatiently, watching customers bite into their food, mouths burning but too hungry to wait or walk even a few paces from the stand. Holding my springy soft bap, I sank my teeth through the buttery layer into the fried potato patty, delighting in the salty lick of hot oil before the tang of coriander chutney and a smack of garlic and chilli powder. This was what falling in love tasted like. Munching on a handful of rock-salted fried chillies, I made my way back to the station, licking the crystals from my fingers and smiling all the way back into the city.

Distance, luxury and food aside, the one thing that surprised me on my journey around India was how safe I felt. While I began my trip in the company of a photographer friend, we soon went our separate ways. And, I was wildly aware of being a single woman travelling alone. Having read the multitude of horrifying reports of the “eve-teasing” and sexual harassment of women on a daily basis, I wore a ring on my wedding finger and a scarf around my shoulders, sitting hunched in corners with my nose in my diary, refusing to make eye contact with anyone. Despite these precautions, I was still groped one night in my berth, stalked down an empty platform, and often entered into staring matches, pulling out my phone to photograph creeps and letches, but these instances were few and far between. Perhaps my lack of showers and deep tan went some way towards repelling the crowds, but I found that most attempts to strike up conversation stemmed from concern, friendship and hospitality. Families would always invite me into their compartments, sharing their food, advice and hotel names, making me promise to call once I had arrived at my destination to let them know I was safe. Even now, my phone will buzz with the occasional text message from a Sikh grandfather who helped me find a taxi to the Wagah border—just to check in.

In between hanging from doorways, squatting on steps and snoozing on piles of laundry, I came to understand where I fit into India and where India fits into me. I did not realise it at the time, but when I left the country, a small part of the railways followed me home to London—their dust in my hair, their rhythm in my bones and their charm infused in my blood. Little did I know that this was just the start of a long-term love affair with the railways, one that would one day take me around the world in 80 trains.

Monisha Rajesh is the author of Around India in 80 Trains and Around the World in 80 Trains. 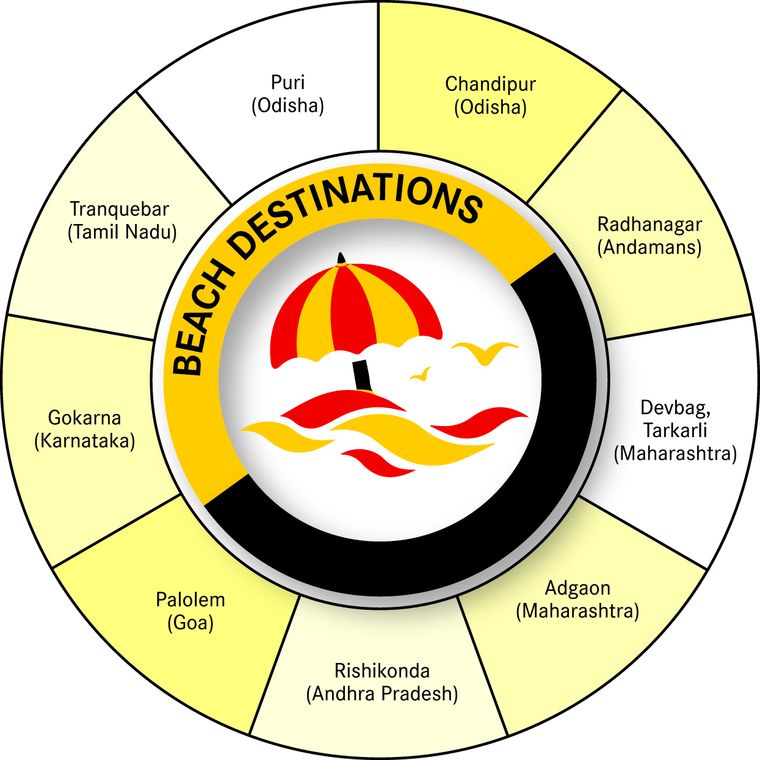