Going with the wind We are at the Myoko festival of the Apatani tribe of Ziro Valley in Arunachal Pradesh. It is a month-long festival of friendship, which is hosted by one of the seven villages of the valley every year. This year, it is being hosted by Hong village. This is the first day of the festival, when each clan—there are several in a village—inaugurates it with ceremonial chanting by a shaman or priest, the examining of a chicken liver to predict the success of the festival, and the passing around of home-made rice beer and tea.

I stood at the periphery, watching the ceremony. My companions had gone to our car to collect some equipment. Suddenly, a man said something to me in Apatani. Almost the whole clan stopped what they were doing and turned to me. I froze. How could I communicate to them that I meant no harm? Then I heard a loud voice behind me. A woman emerged from the shadows, and I realised to my immense relief that they were not talking to me. 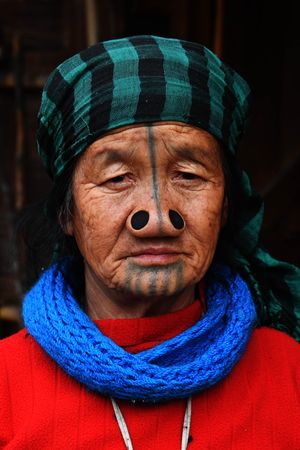 Marked for life: Ya Sung got her nose plugged at seven or eight, and face tattooed at 14 or 15 | Salil Bera

In fact, the Apatanis are a friendly lot. Several of them asked us where we were from and insisted we try the rice beer. When my colleague shot a video of one of them, he joked, “I will see myself next on YouTube.” There are around 30,000 of them in Ziro. They believe they came from Tibet and settled in the valley more than 500 years ago. They are best known for their sustainable agricultural practices. While other parts of the northeast practise the destructive slash-and-burn or jhum cultivation, the Apatanis have maintained the fertility of their paddy fields by an elaborate network of streamlets.

We arrived at Ziro Valley on a damp March morning. It is a four-hour drive from the Naharlagun railway station. Ziro itself is a picture of serenity. The 50-square-kilometre valley is best visited in September, when tourists descend en-masse to attend the annual Ziro Music Festival. Then, the paddy fields, girded by forested hills, are an emerald green. When we visited, though, the land had just been tilled, and it lay desolate and naked.

The next day, we took a walk around Hong village, passing fenced bamboo huts, goats tethered to backyards, old women with betel nut-stained smiles and teenage girls in tight jeans. The Apatanis are nature worshipers who believe that everything in nature is sacred. “We offer sacrifices to the gods of agriculture and the gods of the forests,” says Tage Kanno, a paediatrician from Ziro. “When we go to the fields, the work we do is not just physical but also spiritual.”

However, around 10 years ago, Christian missionaries came to Ziro, and since then, there have been several conversions to Christianity. Many of the traditional practices and customs are under threat, especially with youngsters leaving Ziro to study or find work elsewhere. Families are building houses of concrete and cement instead of bamboo.

There are only a few remaining Apatani women, mostly elderly ones, with the nose plugs and face tattoos they used to be famous for. “I got my nose plugged when I was seven or eight and face tattooed at 14 or 15,” an elderly woman called Ya Sung told me. “It was done during winter, so that the chances of infection were less. My friends did not want to do it and their parents had to force them. As for me, I was looking forward to it.” I ask her why she continued to wear the nose plug when so many Apatani women have got it removed. “It is what gives us our identity,” she says with a gap-toothed smile.