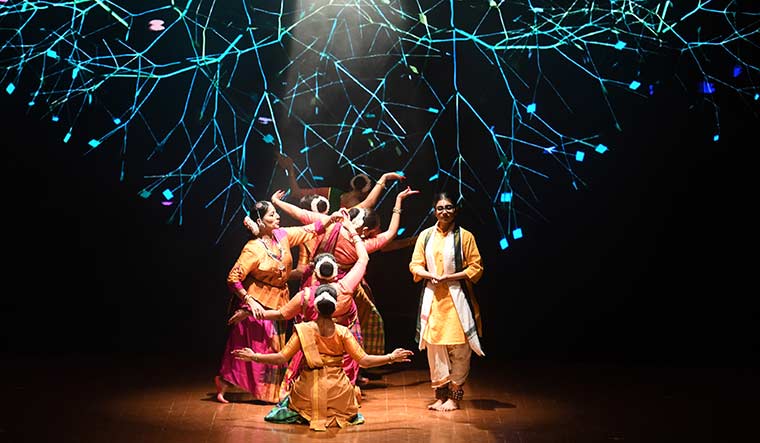 Antariksha Sanchar is a confluence of science and fiction. The fantasy dance opera, which was staged in Bengaluru on September 28, blended Bharatanatyam with visual effects, 3D art, graphics, animation and archival footage, while marrying the melody of Carnatic music with electronic music for a powerful story telling.

The 90-minute show with five acts had renowned Bharatanatyam exponent Jayalakshmi Eshwar as its lead. The art design was done by her son Avinash Kumar (aka Thiruda)—co-founder of a design consultancy, Quicksand—and his team. And the music composition was by M.S.R. Murthy aka Murthovic.

Inspired by the story of S. Ramanujan, the mathematics genius, the show is set in the temple town of Madurai and the repertoire unravels the many facets of south Indian culture and Indian mythology.

Eshwar originally developed the idea as a classical dance repertoire. “In 2011, my mother performed [the Bharatanatyam form of] Antariksha Sanchar,” says Kumar. “[Quicksand] converted it into a video game. Red Bull Music noticed it and invited us to collaborate with Murthovic to work on the ensemble, which is now a 60-member team.” The trans-media form of the show started its India tour in 2018, and Bengaluru was their third stop.

The show revolves around Ramanujan’s premonition that he is meant to do a space exploration. His mother, Sita, who is a classical dancer, inspires him to go to his swapna loka (dream world). As the story proceeds, Ramanujan finds an ancient text that helps him build a navagraha vimana (special spacecraft). As he commands the vimana to leave the earth, the audience transcends into a realm of fantasy.

The narration is interspersed with numerous mythological references like Sitaapaharana (kidnapping of Sita on a vimana) and Lord Hanuman’s encounter with Surasa, the mother of serpents.