How cancer screening and detection has changed since Covid-19

Tech upgrade and innovation has made cancer care affordable and accessible 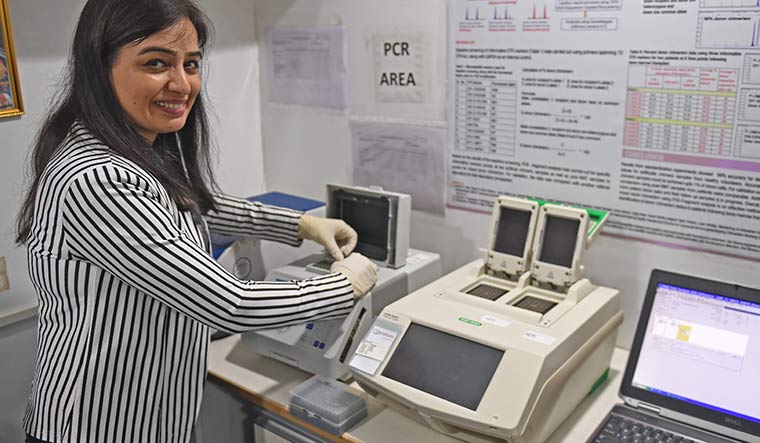 Last June, Aarti Dhowtall, 23, lost her sexagenarian mother, Preeti, to stage 4 lung cancer. The engineering student and her father, Ashok, were caught unawares. For, Preeti showed no symptoms till she started spitting blood. By then, it was too late. “We tried everything; nothing worked,” recalls Aarti. “She just went on deteriorating and, because of low immunity, she caught infections in the hospital, which… led to further complications.”

It is in cases like these that the significance of early detection and diagnosis through screening becomes even more pronounced. The only way to conquer cancer is to detect it early and nip it in the bud. As researchers learn more about the nature of the deadly disease, new diagnostic tools are being developed and existing ones are being further refined. And, this push for innovation in early cancer detection picked pace especially in the post-Covid phase.

“The need for early detection was always acute and dire because that is the only way one can prevent deaths due to cancer,” said Dr Somashekhar S.P., global director of Aster International Institute of Oncology. “What happened in the last year or so is that some of the most expensive technology became accessible and affordable because of the need to tackle Covid and it, in turn, greatly helped oncology.”

Somashekhar cited the example of polymerase chain reaction (PCR) sequencing, which has always been used to genetically detect and diagnose cancer. In pre-Covid times, very few hospitals used it because of its high cost. However, during the pandemic, the cost was brought down and customs duty was slashed significantly so as to enable every hospital to carry out a PCR sequencing to detect Covid-19. Now, PCR has become the go-to-method for amplifying specific sequences of DNA (and sometimes RNA) to detect cancer in its earliest stages.

“The point is, that we are now going further than the traditional/morphological ways of cancer screening, which included mammogram (breast cancer), pap smear (cervical cancer), CT scan (lung and colorectal cancers), and trying to identify the cancer at a molecular and genetic level, that is, by detecting the presence of circulating tumour cells in the blood,” said Somashekhar. “This involves the clinical application of another revolutionary cancer screening tool, namely liquid biopsy, which is rapidly moving from the research stages to application in hospitals.”

This March, Rituparna Badgamia (name changed), 43, was diagnosed with stage 1 breast cancer, after she noticed “a painful lump in her breast”. She first underwent a liquid biopsy that revealed the presence of cancer cells. The diagnosis was further confirmed by an ultrasound, followed by a mammogram. Till recently, liquid biopsies were only available for advanced cancers.

Genomics, said Dr Amrit Kaur Kaler, consultant, molecular pathology, Kokilaben Dhirubhai Ambani Hospital, Mumbai, is playing a huge role in the understanding of cancer, helping identify the driver mutations responsible for a particular type of cancer and narrowing down the treatment modalities. “The latest technique is next-generation sequencing, which has been around for a decade but is now being routinely used more than earlier mainly because of the low cost, easy accessibility and year-on-year sophistication,” said Kaler, who specialises in cancer genomics.

Dr Sharat Damodar, chairman, oncology services, Narayana Health, Bengaluru, highlighted how “laboratory work” associated with cancer detection and diagnosis had become increasingly digitised. Earlier, a sample had to come to the lab and the pathologist had to examine it inside the lab. Now, one can simply capture images and transfer them digitally to the pathologist, who could be working from home. This is huge in the area of cancer screening, which requires high-end precision. “All of this led to processes being more structured, refined and fine-tuned,” said Damodar. “With every city now having a gene-testing lab, the very field of cancer diagnosis went up by several notches and became super-sophisticated. Our ability for diagnosis and prognosis, therefore, has improved.”

In the case of cervical cancer―which is reportedly the fourth most prevalent cancer among women―a new, indigenous vaccine based on the mRNA technology, which doctors hail as the next era in cancer prevention, has been launched by the Serum Institute of India. So far, we had been working with the DNA technology or deactivated vaccines. It was only post Covid-19 that using the mRNA technology in cancer prevention was even thought of. The vaccine has been made available at a reasonable rate, making it a game-changer in containing cervical cancer cases.

“ All that happened in the last one and a half years in the field of cancer detection would have taken ten times more money and ten more years to reach where we are today,” said Somashekhar. “A lot of tech was developed which we never thought would have been possible and all at half the cost.”

Breast cancer, in which early detection significantly improves the prognosis and reduces fatality in the long run, has seen a lot of innovation and breakthrough research. Mammography, which is the most advanced technique of detecting a tumour in breast tissues, has undergone digitisation so as to provide doctors with an improved quality of images in a shorter period of time. It also prevents exposure to unnecessary radiation as it is specific and much more focused. There is also Tomosynthesis or 3D mammography, which uses low-dose X-rays and computer reconstruction to create 3D images of the breasts, thereby helping oncologists to locate the exact spot of the tumour. There is also the two-dimensional Finite-Difference Time-Domain (2D FDTD) technique that uses electromagnetic rays to detect tumours that are just 2mm in size, which would otherwise be lost among healthy breast tissues.

And, there is more. For instance, breath biopsy enables non-invasive collection and analysis of bodily compounds in exhaled breath, said Dr Aneeta Bajaj, consultant radiologist, Apollo Hospitals, Navi Mumbai. “We also have what is called the magnetic resonance elastography in ultrasound, which tells us how stiff the breast tissue is,” she said. “Malignant lumps are stiffer than benign ones. So, we immediately get to know the type of the tumour.” But there is no denying that biopsy remains the gold standard, she added, and that one still needs to undergo mammogram.

This June, Apollo Cancer Centres with Datar Cancer Genetics introduced a blood test that can detect breast cancer at an early stage in asymptomatic individuals. EasyCheck Breast is said to help in the detection of breast cancer even before the first stage and is available in all Apollo centres across the country. “In India, we pick up cancers in late stages, stage 3 or 4, while in the west, it is much earlier due to their robust screening programmes,” said Dr Prathap Reddy, founder and chairman, Apollo Hospitals at a news conference. “Therefore, it is our responsibility to detect it at an early stage. When it is detected early, mortality is much lesser. The EasyCheck Breast test is a simple blood test, which is non-invasive and doesn’t involve radiation.” But Bajaj said that the test may not be entirely conclusive and is at best indicative.

But there is no such innovation for early detection of ovarian cancer. What makes it all the more difficult is that there are no specific symptoms. “It can start with indigestion, weight loss, bloating, bleeding, loss of appetite…. These are gastrointestinal disease symptoms,” said Dr Kanika Gupta, senior director, surgical oncology (gynaec and robotic surgery), Max Healthcare, New Delhi. “In 10 to 15 per cent cases, genetics is the cause. Although pap smear test is available, there is nothing in terms of early diagnosis. In fact, more than three-fourth of my patients learn about their cancer through accidental diagnosis, and that too in stage 3. We desperately need something in this area because 80 per cent of the time it is diagnosed in stage 3 and 4 and with very high grade tumours.”

But there is hope―a new study by Wilmot Cancer Institute revealed a technology that can detect stray ovarian cancer cells through a blood test and predict cancer in people with a lesion or cyst in the pelvic region. Artificial intelligence, too, is reportedly helping oncologists in the UK detect ovarian cancer in patients much earlier than was previously possible, according to the CEO of TPP Frank Hester, which provides health-care related software to doctors and nurses. Though nothing conclusive has yet come about, he hopes that we get something that is indigenous very soon.

Post pandemic, we have observed an unusually high increase in infertility issues among women, especially relating to polycystic ovary syndrome, and this is true for women in their late 20s and early 30s as against women in their 40s. I have a high number of patients with severe vitamin D deficiency; they complain of acute back pain. Obesity due to sedentary lifestyle resulting in menstrual irregularities is also seen.

I strongly advise women to prioritise their health. Daily exercises for at least 45 minutes is extremely crucial and this should include at least 10 minutes of back exercises alone. Calcium and Vitamin D supplements for those who have acute deficiency is important. It is important that one takes dinner in a controlled manner if one has skipped the earlier two meals in the day, because otherwise sugar levels can spike uncontrollably. Regular annual checkups are mandatory. Mammography must be done at least once a year by women over 40 so as to not miss any lumps in the breasts. Pap smear must be done for detection of cervical cancer. Sonography must be done on a regular basis to check for fibroids or polyps in the ovarian cells.