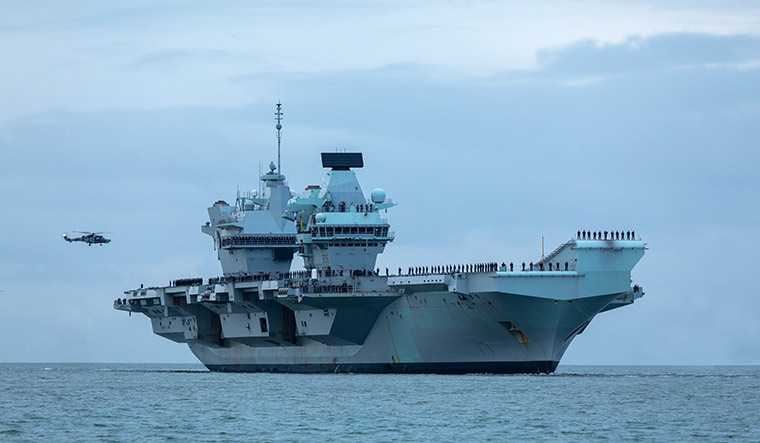 HMS Queen Elizabeth: The lead ship of the royal navy (Britain) has a displacement of 65,000 tonnes and can carry up to 70 aircraft.

THE RUSSO-JAPANESE war of 1905 shook the world for two reasons. One, for the first time an Asian power defeated a European power in a naval war. Two, the winners, the Japanese, converted a vessel they had captured from the Russian fleet, fashioned it into a seaplane carrier, and began projecting power. It would conduct the first naval-launched air raids during World War I.

The earliest documented occurrence of using a ship for airborne operations was in 1806, when Lord Cochrane of the British Royal Navy launched kites from HMS Pallas (32-gun frigate), to unload propaganda leaflets against Napoleon Bonaparte. The leaflets were tied to kites and they landed on French soil when the strings completely burned.

Many years later, in 1849, inflammable balloons were launched from the Austrian ship SMS Vulcano, for dropping bombs on Venice. The attempt failed, as winds drove the balloons back over the ship. 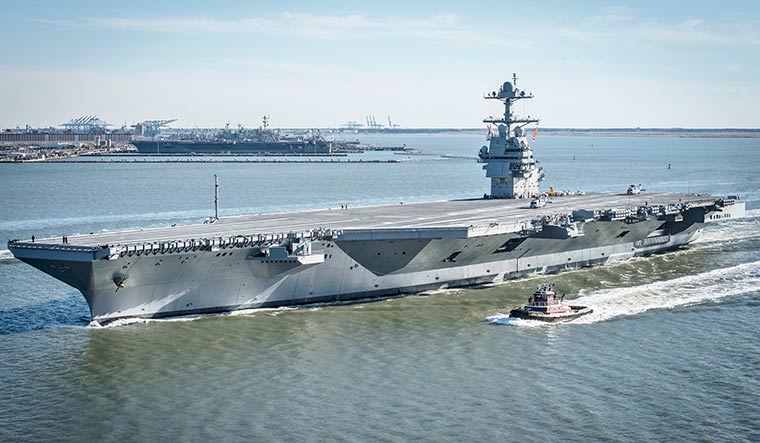 Gerald R. Ford: belonging to the US navy, she has a displacement of one lakh tonnes and can carry close to 80 aircraft | Us Navy

In the early 1940s the US designed a series of 45,000-tonne ships. The Midway, a class of three aircraft carriers, was built with armoured flight decks. Today, the US has 11 aircraft carriers, 10 of them Nimitz class—these are the largest warships in the world. The Nimitz carrier is nuclear-powered and needs refuelling only once in its 50-year service life. It displaces one lakh tonnes. 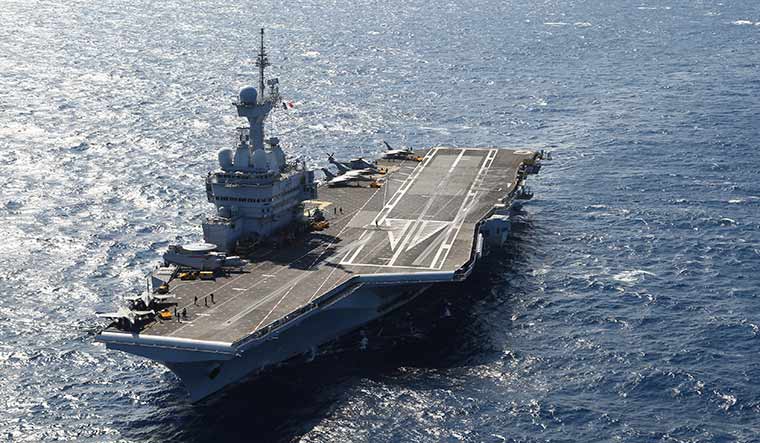 Charles de Gaulle: the nuclear-powered carrier belonging to the French navy can carry 40 aircraft and has a displacement of 38,ooo tonnes.

Nimitz will soon make way for five Gerald R. Ford carriers. Though its hull is similar to Nimitz, Ford will have more space, speed and power, and greater displacement.

China’s third aircraft carrier, Fujan, has a weight of 80,000 tonnes and can carry up to 50 aircraft, including manned drones and boats. Though yet to be commissioned, it is more powerful and more technically advanced than the other two carriers, Liaoning and Shandong. These two entered service in 2012 and 2019, respectively. China, though, has been operating aircraft carriers since the 1980s.

The French have a nuclear-powered carrier, named after Charles de Gaulle. Launched in 1994, it made its first voyage in 2001. It can carry 40 aircraft and has a displacement of 38,000 tonnes.

Vikrant is India’s fourth aircraft carrier. While Vikrant (1961-1997) and Viraat (1987-2016) were of British origin, Vikramaditya (2013 onwards) is of Russian origin. Russia stopped making aircraft carriers after the collapse of the Soviet Union, whose biggest shipyard was in Ukraine. Russia’s only aircraft carrier now is Admiral Kuznetsov, which has a displacement of 60,000 tonnes and can carry 40 helicopters and aircraft.

With inputs from Ajish P. Joy