Vikrant will enhance India's position as the preferred security partner 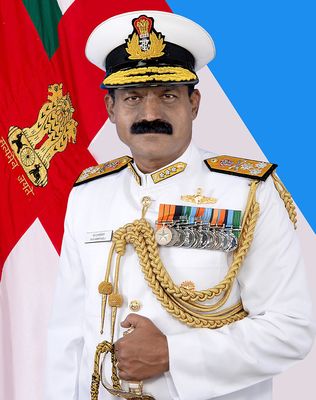 WITH INS VIKRANT joining the fleet, most likely on the western sea board, the Indian Navy would again be having two carriers, just as it did when it had the old Vikrant and Viraat together in the eighties. However, with a growing economy, and increasing aspirations, the stakes in sea power are also growing, leading to many in the maritime circles saying that India would need a third carrier to undertake the tasks expected of its navy. Meanwhile, there is also a growing school of thought that believes that India ought to invest in more submarines, as also shore and island-based facilities.

In a candid interview, Vice-Admiral M.A. Hampiholi, flag officer commanding-in-chief of the Navy’s southern command, himself a specialist in submarine warfare, discusses these and other issues about the Navy’s increasing responsibilities. Excerpts:

Q/ India’s long wait for an indigenous aircraft carrier is over. How will Vikrant bolster lndia’s position in the Indian Ocean region and its efforts for a blue-water Navy?

A/ The overall air power that an aircraft carrier brings to the operational area is not limited to the tremendous capabilities that the fighter aircraft can deliver. It also includes the capabilities of the carrier-borne helicopters and the weapon package of the escort and support ships that sail with the carrier as part of the Carrier Battle Group.

The Indian Navy has been operating aircraft carriers since 1961. INS Vikrant is India’s first indigenously built aircraft carrier. With the induction of Vikrant and subsequent proving of its combat capability, it will join INS Vikramaditya as one of the most valuable assets of the Indian Navy. Vikrant’s ability to project tactical air power over long distances will enhance India’s position as the preferred security partner and first responder in the lndian Ocean region. It will also be a key enabler in the country’s vision of security and growth for all in the region, rules-based international order, and free and open Indian Ocean region.

Q/ Which are the deck-based fighter jets that the Navy has shortlisted for Vikrant? How would you compare Vikrant with some of the best aircraft carriers in the world, like the Nimitz class of the US or China’s Liaoning?

A/ The flight trials and combat capability of Vikrant are initially planned to be proven with the Navy’s light combat aircraft Tejas and MiG-29K. Vikrant is also capable of operating modern fighter jets like the French Rafale M and American F-16s with modifications. Each aircraft carrier is a military tool with tremendous operational capabilities and can be categorised depending on factors such as propulsion machinery, type of launch and recovery of fighters, number of aircraft it can carry, sortie generation rate, to name a few. Vikrant has modern sensors and equipment, which have supplemented its long reach and maritime air power projection capabilities.

Q/ How many aircraft can Vikrant carry? What are its distinct advantages?

A/ The design of the ship caters for a carrying capacity of 30 aircraft. That includes different variants of fighters and helicopters. However, the actual numbers carried will depend on the type of mission and operational scenario.

Q/ How different is Vikrant from Vikramaditya, which is considered the most potent warship with the Indian Navy?

A/ Vikrant is indigenously designed by Indian Navy’s Naval Design Bureau and built by Cochin Shipyard Ltd, whereas Vikramaditya is a Kiev class aircraft carrier modified in Russia. Apart from minor differences in the dimensions, the differences in the type of propulsion, the weapon and sensors package, length of take-off and landing runways, and the position of the service aircraft lifts, make Vikrant a potent platform. Both these carriers will play equally important roles as warships for the Indian Navy.

Q/ Would Vikrant carry women sailors? What are the women-friendly facilities on Vikrant?

A/ With the Agnipath scheme being implemented for all the three services, the Indian Navy has taken a lead in induction of women as sailors. They are envisaged to comprise about 20 per cent of the induction strength. This implies that women sailors will be deployed onboard Vikrant also in the near future. At present, more than 25 women officers are serving onboard warships. Vikrant has a modern warship design, and many women-friendly facilities have been incorporated in the living spaces, common areas and medical wards.

Q/ The Chinese navy has increased its presence in the Indian Ocean region and is emerging as a threat. How is the Indian Navy monitoring the Chinese naval and maritime assets deployed in the region?

A/ The Navy is fully seized of the security implications of the enhanced presence of the Chinese ships, submarines and research vessels in the Indian Ocean region, and maintains a constant and close watch on such developments. The Navy maintains Maritime Domain Awareness, as well as an appropriate degree of readiness to meet any emergent situation. The naval ships and aircraft are regularly deployed to maintain continuous and effective surveillance to monitor extra-regional/ non-littoral ships and submarines in our area of operations. Further, patrolling by surface and air assets, and electronic surveillance of the maritime zones, are undertaken using a chain of coastal offshore radars—the NAIS chain and LRIT system.

Q/ Do you see the need to have a second indigenous aircraft carrier soon?

A/ There is no doubt that an aircraft carrier is central to the Navy’s concept of operations, and the Navy would need three aircraft carriers to safeguard national maritime interests within our areas of interest against the backdrop of changing geopolitics in the Indian Ocean region. The Carrier Battle Groups are undoubtedly the source of power projection, and provide freedom of manoeuvre in the vast area of operations of interests. The three carriers would arm the Navy with the required teeth to deter our potential adversaries from any misadventure, as well as to establish credible deterrence in our area of operations. The maritime capability perspective plan of the Indian Navy, therefore, envisages induction of three aircraft carriers to ensure development of capability to operate two Carrier Battle Groups at all times, and with the third carrier under maintenance.