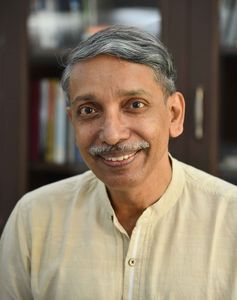 Q. How is the year 2022 an important one for higher education, considering several new schemes and policies are being implemented?

A. It is a work in progress. So, I wouldn't say any particular year is more important than the other. The scale at which we need to transform higher education in our country—so big and diverse—is staggering. The biggest challenge is how to take care of the diversity, while at the same time make our students future-ready. I can definitely say that reforms are being implemented in a rapid way. There are two major components on which we are working, apart from several in place. One is establishing a digital university, which will impact the lives of millions of students. The other is a draft bill for establishing the Higher Education Commission of India [HECI].

A.There are a few things that will impact students because of the reforms we are bringing. One is the admission process. In all Central universities, there will be a level-playing ground for the students. There will not be any pressure to get 99 per cent or 100 per cent board scores. The CUET is being conducted in 13 languages and we have increased the number of cities in which it will be held, so that students coming from rural backgrounds and remote areas can write the exam. The 90 universities which have adopted the CUET are going to see a lot of diversity of student input. The admission process is going to be highly objective. But in the sphere of actual education, we are going to bring in a lot of flexibility. For instance, if a student wants to leave college in the second year for whatever reason, he will be allowed to rejoin when his situation improves, and continue from where he left off.

A.There are positive aspects of physical campuses. But colleges and univesities in rural and other far-flung areas have only two options: don’t study any advanced course or you access Swayam, or the digital university, and do some advanced courses. Obviously, students will choose this option. And because 40 per cent of the courses can be done at their own leisure, there is no pressure of attending classes. Currently, students can only earn 40 per cent of their credits from Swayam. We are going to change that regulation.

Q. There has been a lot of talk on teacher workload. They are concerned that it will go down due to flexibility and digitisation. There is also the fear of job losses.

A.This fear of job loss is misplaced. Because, right now, we have nearly 35 per cent vacancies in all higher education institutions. So where is the question of jobs going down? We are actually requesting all universities to recruit as often as possible. And, for Central universities, we are working on creating a common portal where any prospective candidate can register for faculty positions. Whenever a university announces vacancies, it will appear on the portal. Candidates can fill in details and it will be accessible to all universities when they log in. So candidates don’t have to feed in their qualifications multiple times. We will simplify the application process this way.