PM did not attend an English-medium school, says Dharmendra Pradhan 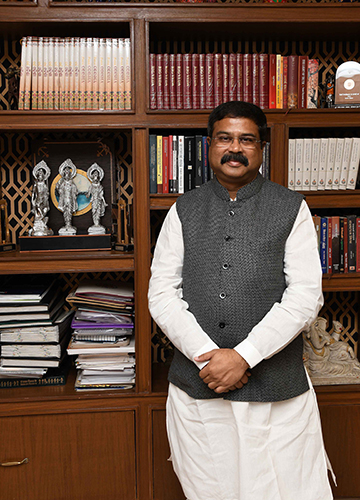 The National Education Policy which was introduced on July 29 2020 was the third in India. Two years later, it is growing fast. From launching 200 virtual labs for schoolchildren to introducing multidisciplinary four-year undergraduate degrees with several exit options, a national test for college admissions to offering engineering courses in regional languages, the higher education landscape in India is being readied for a new generation of learners who grew up navigating the internet on smartphones. In an exclusive interview with THE WEEK, Union Education Minister Dharmendra Pradhan takes stock of the corners turned and the road ahead. Excerpts:

Q. Since the rollout of the NEP in 2020, what would you like to highlight as key milestones achieved so far?

A. As we look back on the NEP’s second anniversary, it has generally been a satisfactory journey. Even though we lost one year to the pandemic, several features of the NEP are being implemented, like working towards a new curriculum in school education, introducing early childhood care and education as a new concept in formal schooling (a role earlier filled by anganwadis and play schools).

The timeframe that was recommended for the National Curriculum Framework—which includes processes like building steering committees, focus groups, position papers and involving stakeholders—are all on track. The big challenge lies in building a curriculum in a 21st century where everyone’s looking at India in the new geopolitical order. In this new world order, there is innovation driving industrial revolution 4.0, climate concerns and SDGs (sustainable development goals). These disruptive forces, when mapped onto the NEP, entail a paradigm shift in education.

Teachers have to be primed with newer approaches to prepare this new generation. They are the key catalysts here. That is already being done with a new pattern in place at bodies like the Integrated Teacher Education Programme. We are building more and more innovation hubs and skill development courses. Higher education employability is set to grow, along with a mindset of a job creator from a job seeker. We are introducing multidisciplinary courses, dual degrees and twinning programmes. To create a new generation of students who are global citizens and also fulfil domestic aspirations, that is the responsibility of the NEP. I am confident we are on the right track

Q. The NEP has emphasised the use of regional languages in schools and colleges. It has also introduced engineering courses in five regional languages in some states. How difficult is it to translate technical courses? Are there translation softwares being developed? Implementation is being seen as a challenge and parents still mostly prefer sending their children to ‘English-medium’ schools.

A. It is scientifically proven that children learn best in their mother tongue. When children study in the language they grow up listening to and speaking in, it aids their cognitive and psychological development. That is why countries like Japan and Germany have kept their basic education ecosystem to the native language. Look at their economic development. Those countries are models for us.

There are several examples in India, too. A.P.J. Abdul Kalam did not start his studies in an English-medium school. The president and the prime minister did not go to English medium schools. No one has any issues with studying in English. Those who want to work at a global level, like in international trade and commerce, in high-end research, or study English literature in depth, they must know and read English. But, English is not a precondition for growth, employability and development. We believe there should not be a limitation on languages. They should all complement each other. That is the recommendation of the NEP. Converting technical subjects into local languages will not be a problem. We are developing indigenous translation tools like Bhashini (part of the National Language Translation Mission) which will offer internet and digital services in local languages.

Q. Will the Higher Education Council of India be realised soon? How will it ensure autonomy to higher education institutions (HEIs)?

A. By the coming winter session, we hope to place the draft bill of the Higher Education Commission of India (HECI) in front of Parliament. Even today, some 1,000 HEIs (not autonomous colleges) frame their own curriculum and control their financial and administrative affairs. Ultimately, the HECI will deal with not just granting autonomy, but accreditation and standardisation, common assessment, and lending a sense of uniformity. We are working in that direction. We believe governance should also have a transparent, objective model.

Q. The successful implementation of the NEP would require a good deal of cooperation from states. Can you tell us about some of the challenges on that front? For example, several state universities and colleges are not accepting CUET scores.

A. There are no challenges. All states are cooperating to implement the NEP. CUET is a voluntary mechanism. Several states have their own common entrance exams. We cannot force a state to participate in CUET, but all Central universities are on board. CUET should not be considered a parameter when we talk about cooperation under the NEP. And all states are working towards incorporating the central tenets of the NEP in their education system.

Q. CUET is one of the most important NEP-driven reforms that have been implemented. But several experts say that CUET is not exactly a proficiency test, but a test of how well a student has mastered a textbook. That just a multiple-choice question exam is not good enough to test a student’s eligibility for college admissions.

A. The exam has just started. I request people to not pass judgments already. Students will be marked on the basis of their performance and accordingly allotted colleges. They are preparing for the test based on the NCERT (National Council of Educational Research and Training) syllabus. Standardisation requires an entrance. Because marking systems via different boards have not worked.

Q. The NEP uses the term research so many times in the policy draft and suggests setting up a National Research Foundation. Given that India’s research budget remains at a low percentage of GDP compared with China and the US, and even the best Indian university ranks woefully poor in research performance rankings in the world, what is being done to make HEIs more well-endowed and research-friendly?

A. Budget is not the only existing instrument to aid research. And the funds for research in educational institutions, labs in agricultural, biotech, technological or scientific domains, are drawn from the government, state and private channels. Is this enough? Certainly not. To make research a new window, we are bringing in several reforms, including the National Research Foundation (NRF) which will focus on strengthening existing facilities.

The NRF is being created at a multi-ministerial level. If we want to make our country a technology leader, a manufacturing hub and a knowledge economy, we have to prioritise research. For example, the government has decided to invest some Rs70,000 crore in semiconductors and emphasised research in universities to that end. Indigenous technology for 5G has also come to India. This is also the outcome of our research. Is this sufficient? No. But the Narendra Modi government has prioritised research because without it we cannot play a substantial role in the global supply chain.

Q. As per the University Grants Commission, Indian colleges and universities will now be able to look at collaborations with foreign universities over three kinds of programmes—joint degree, dual degree and twinning degree. What are some of the new initiatives ready to be unveiled to promote further internationalisation of education in India? Are any of the top universities in the world setting up campus here?

A. The HECI will have all the provisions for further internationalisation. Also GIFT City (a planned business district in Gujarat) will be free from all regulations of India and foreign universities can come and set up campuses there. The UGC is speeding up rules on that front. Some premier Indian institutions (like the IITs) are setting up courses in foreign universities with dual degrees. We are also aiming to bring foreign students in larger numbers, especially from regions where we are actively working on several projects like Africa and southeast Asia.

Q. The introduction of the NEP also coincided with a pandemic when virtual learning became a lifeline. But some 78 per cent students in the National Achievement Survey results reported online learning to be “burdensome”. And 24 per cent did not have a digital device at home. On the one hand, there is the problem of lack of access to devices and then the ones who do have access find online learning to be a killjoy. Since pivot to online education is such a big part of the NEP, what is being done to address the digital divide? And how will it impact learning outcomes?

A. Our pandemic experience should not offer a standard definition of digital learning. Virtual learning simply does not imply learning through an app or a computer or a phone. Today 200 virtual labs are being introduced for science lessons. This will be inside a school. It will be shown on a digital board with 3D models of lab equipments. Is this not digital learning? The NEP is only advocating blended learning—something called technology infusion. Not how to study in a crisis. The Centre has invested some Rs1,000 crore to build 200 TV channels for classrooms in several languages. So in the coming days, education will be realised through satellites, online and radio frequency. All of this is digital education. A teacher will come to the classroom, content will be broadcast with the help of digital boards and real-time videos, instead of blackboards and chalk. That is the blended model. With respect to access to devices, think of a library in a school. Are not the books there for everyone to read?

Q. Which are some of the subjects which have become popular in HEIs since the NEP kicked in?

A. Every subject is important. Let us not compartmentalise it. Let us leave it to the student’s interest and capabilities. Our youngsters are growing in an environment which is multidimensional. Our government is concerned with how to give them a level-playing field. They will grow according to their capacities, imagination and intellect.

Q. Finally, what would you like to say to students who will start physical classes in colleges this year?

A. We have to make our students global citizens who have global prospects. They will learn to care about sustainability. They will be sensitive and passionate. Our education systems and learning temples will encourage young minds to dream, aspire and inspire.