Politics in the Modi era is a 24x7 phenomenon, not just for election season 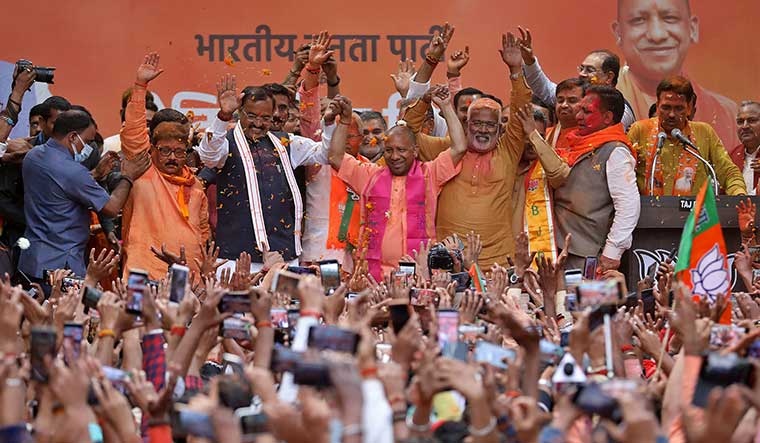 Narendra Modi draws his legitimacy from electoral mandates. The devastating pandemic, lockdown-induced migration, job losses and inflation, among other setbacks, were all forgotten as he worked his magic on the voters in the latest round of state elections.

In terms of scale, the BJP now rules over 40 per cent of India’s geographical area, down from 70 per cent in 2018, but the impact of this latest victory is the biggest since the election that returned the prime minister to power in 2019. It is a sobering lesson for the losers, and a bigger challenge for the contenders, if any, to his throne in 2024. Politics in the Modi era is a 24x7 phenomenon; it is not to be practised just before elections, as the opposition found out in Uttar Pradesh.

The March 10 verdict marks a big shift in the country’s polity. It is a signal that sharp politics and messaging work, if done around the clock. The Uttar Pradesh result marks the rise of a new, muscular politics and the addition of another leader to the firmament. Two decades ago, Narendra Modi—having been picked as Gujarat chief minister by the BJP’s central leadership in 2001—led the party to victory in the 2002 state elections. He won the mandate for himself. Now, Yogi Adityanath has done the same. Plucked out of relative obscurity in 2017, he has now proven his electoral strength. If 2002 was the start of the Modi era, this well could be the beginning of Yogi’s.

The elections in Uttar Pradesh were about the MY factor. For years, the Samajwadi Party—which increased its tally by around 70 seats and 10 per cent votes—had relied on the MY (Muslim-Yadav) combination. With this result, there is a new MY in town—Modi-Yogi. The BJP became the first party to retain power in the state in 37 years, and Adityanath became the first BJP chief minister to complete a full term.

In five years, the monk in saffron robes tamed the state; he built his reputation as a strong administrator by improving law and order, an issue that found resonance among voters. What also worked for the BJP is its time-tested template of hindutva plus welfarism. The distribution of ration during the pandemic endeared it to the women voters. They are the main beneficiaries of the government’s doles—many of the men migrate for work—and have proven to be a major factor in these elections.

The return to power in the most populous state makes the road to 2024 easier for Modi and tougher for his opponents. It also makes Adityanath the first among equals when it comes to BJP chief ministers, a group that includes veterans like Shivraj Singh Chouhan. If anything, this win will only increase the clamour to make Adityanath Modi’s successor. 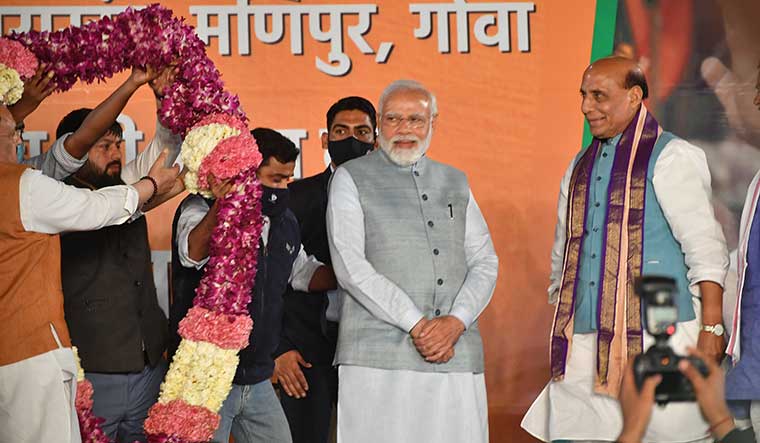 It could also propel Adityanath into the powerful parliamentary board. Though his rise would annoy some of the older BJP leaders, they will have to keep quiet as the Rashtriya Swayamsevak Sangh could throw its weight behind him.

But, can Adityanath jump the queue to become Modi’s successor when others like Home Minister Amit Shah, Defence Minister Rajnath Singh, Chouhan and Transport Minister Nitin Gadkari wait in line? Unlike Shah, Adityanath has little connection with MPs of the party outside his state. Shah has, in the past few years, picked most of the candidates for elections, and they would likely remain loyal to him.

The BJP central leadership, in practical terms, has been a duopoly of Modi and Shah. Whether that becomes a trio will depend on how much space Modi and Shah allow Adityanath, who is a lone ranger. Till a few months ago, there were strong rumours that BJP MLAs in Uttar Pradesh were disenchanted with Adityanath.

Also, Shah, too, played a big role in the Uttar Pradesh victory. He micro-managed the campaign, held more than 60 rallies (more than Modi and BJP president J.P. Nadda), and was the first to fix Adityanath as the face. 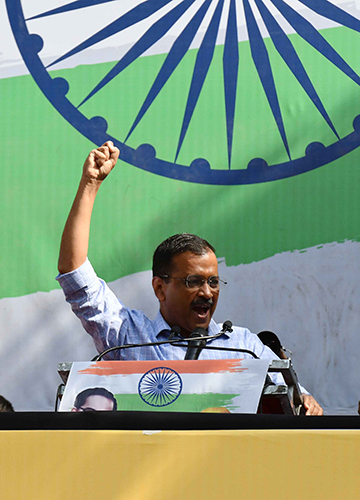 The question now is, will the drop of over 50 seats (vote share is intact) from the 2017 tally impact Adityanath’s stature? Modi and Shah could bring in new faces into his cabinet, including former bureaucrat-turned-politician A.K. Sharma, to keep a tab on the administration. Shah has, in the past, encouraged alternate leaders in several states where the chief ministers were seen as unamenable to the leadership.

Uttar Pradesh aside, the BJP formed its second government (on its own) in the northeast after Assam, in Manipur. It was also re-elected in Uttarakhand, and is just one short of the majority mark in Goa.

“The BJP is winning as other parties are shrinking,” said BJP spokesperson Gaurav Bhatia. “Earlier, people used to talk about anti-incumbency, now it is about pro-incumbency. The chief ministers’ work has paid off; the poor, women, dalits and the marginalised have been helped. It is a victory of positive politics.”

As if on cue, the Election Commission allowed victory processions. Addressing workers in Lucknow, Adityanath said it was a win for nationalism, governance, and law and order. Senior party leaders played Holi amid chants of ‘Jai Shri Ram’. A song about bringing to power those who brought Ram has crossed the border and is being played for the Delhi municipal election campaigns.

There were three important components of the Adityanath government. One, it moved away from exclusionary caste politics. “When Modi arrived in 2014, he brought in the class factor with a focus on gender, marginal farmers, the poor and the marginalised,” said Dr A.K. Verma, director, Centre for the Study of Society and Politics. “The schemes and financial security worked for them. This movement of polity from caste politics to class politics is helping the BJP.”

Does this mean Akhilesh Yadav’s social engineering misfired? He improved the party’s vote share by 10 per cent, but could not translate this into seats. While the BJP had a pantheon of leaders, he was the sole campaigner for the Samajwadi Party. “Yadav is not doing social engineering,” said Verma. “He is experimenting. He started by allying with the Congress, even though his party was founded on the principle of anti-Congressism; he then allied with Mayawati and now with smaller parties. That is why his politics of social engineering is not working.”

Though Yadav was the prime challenger, he was not strong enough to take on the BJP’s machinery, which works 24x7. He only became active around six months before the elections, and was largely invisible during Adityanath’s rule.

However, it was an improvement for the Samajwadi Party, as these elections saw Yadav become a more confident leader. The Rashtriya Janata Dal’s Tejashwi Yadav, too, had shown some fight in the previous Bihar elections. However, the two young Yadav leaders would have to reorient their politics to stay relevant. As social engineering based on Mandal politics acts as a counter to hindutva, the demands for holding a caste census may intensify.

If conducted, it may throw up new demands for reservation.

Talking of caste, another highlight of these elections has been the decimation of Mayawati and her Bahujan Samaj Party. Its vote share dropped to less than 13 per cent, as it won only one seat. Even the Jatavs, who have been Mayawati’s core voters, have started looking elsewhere. Dalits in the country have become more conscious of their rights, but their tallest leader is slipping. The dalit vote, especially those of the non-Jatavs, has shifted to the BJP and the SP.

This unravelling of the BSP is yet to benefit new entrants like Chandra Shekhar Azad’s Azad Samaj Party. Moreover, Congress Chief Minister Charanjit Singh Channi’s loss shows that dalits are moving to those who can win elections and provide them with benefits.

The only party that matched the BJP’s level of engagement was the AAP, at least in Punjab. It also focused on discipline, booth management and effective messaging. The rise of Delhi Chief Minister Arvind Kejriwal has been on par with those of leaders like West Bengal Chief Minister Mamata Banerjee, Nationalist Congress Party president Sharad Pawar and Telangana Chief Minister K. Chandrashekar Rao, who have been exploring unity among non-BJP parties. The AAP was kept away from these plans as it only ruled Delhi, and Kejriwal was seen as a political lightweight.

Given this win, will Kejriwal now leave the management of Delhi to his deputy Manish Sisodia and devote his time to the party’s expansion? He is likely to, as the AAP is now the third party, apart from the BJP and the Congress, to have governments in at least two states.

It will also be interesting to see how new Punjab Chief Minister Bhagwant Mann navigates his relations with the Centre. The AAP government in Delhi has had a chequered history with the Modi government, and Punjab, which is a border state grappling with drugs and radicalism, would need to be handled sensitively.

Both Kejriwal and Mann had nuanced their messaging on the farm laws issue to steer clear of controversy. Mann had told THE WEEK in an interview earlier this year: “For Punjab’s security, peace and prosperity, we will seek cooperation; even if we have to bow before anyone or touch anyone’s feet, we will do it. But we will keep Punjab a peaceful state at all costs.”

For the BJP, the focus now shifts to the presidential, vice presidential and Rajya Sabha elections. The BJP may lose some seats in the upper house, and it will need more help from friendly parties to get important legislation passed. Also, the BJP has not made it clear whether President Ram Nath Kovind will get another term. The 2022 mandate, incidentally, has meant that the talk in the opposition camp of putting up a joint candidate—perhaps Bihar Chief Minister Nitish Kumar—is expected to die down.

Among the opposition parties, this round of elections has hit the Congress the hardest. It lost Punjab, and could lose it further in the Lok Sabha elections. The AAP could grow at its expense and the Congress’s Lok Sabha tally could take another hit.

The results in Punjab and Uttar Pradesh also signal a change in north Indian politics, where broad-based parties like the BJP and the AAP are scoring over regional players like the Samajwadi Party and the Akali Dal.

Now armed with a historic win, the BJP could steamroll any opposition to its ideological agenda. “The common thread in this victory is the trust in the BJP, trust in its policies,” said Modi. “I hope the learned would say that the 2022 results will reflect in 2024.”

The larger message of the BJP and AAP victories is that, primarily, it is about delivery of promises combined with effective communication. Only then do factors like nationalism and hindutva come in.