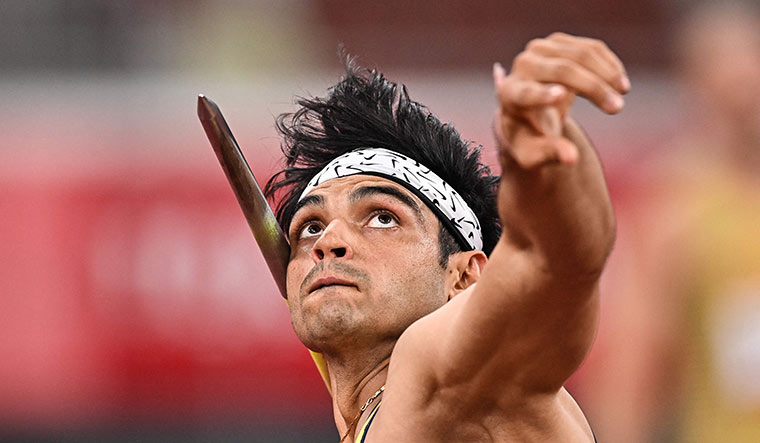 FOR NEERAJ CHOPRA, life after winning gold in Tokyo 2020 has been, well, different. The historic win—India’s first in athletics at the Olympics—led to celebrations, felicitations, interviews, magazine covers, photo-shoots and even a witty ad for a credit card company. It was a whirlwind time, broken only by a return to his village of Khandra in Panipat, Haryana. A 10-week rest and a few added kilos later, Chopra was back on the field, training under the sharp eye of coach Klaus Bartonietz.

Chopra’s was the first Olympics gold for India in 13 years, and the only athletics medal post-independence. While the experts had backed him, the win came almost out of the blue for the casual watcher; unlike in shooting, where Abhinav Bindra had struck gold in Beijing, track and field had been barren ground for India. And that is what made that throw monumental. Officials may have removed that spear from the ground, but its imprint will last long on India’s psyche.

Chopra’s gold has sparked a mini revolution in javelin, just like Bindra’s had done in shooting. Coaches at the grassroots level can attest to this. Said Naval Singh, the men’s javelin coach at the Athletics Federation of India: “The level of interest in javelin has shot up majorly. So much so that in Haryana, I know for sure, javelins often go out of stock due to demand.”

Manisha Malhotra, head of sports excellence and scouting at JSW Sports, said the interest needed to be nurtured properly. “There is tangible interest in the sport post Neeraj’s win, but it could wane because those who want to take it up do not have proper knowledge or access to it,” said Malhotra, who has managed Chopra from his junior days. “They do not know where to go; even if they do, there are not enough javelin coaches or access to the right equipment.” She did acknowledge that, since Chopra’s feat, JSW and its scouts have been getting around 50 queries a week from aspiring throwers asking for guidance.

Bikramjit Singh, a javelin coach with the Punjab sports department and a talent scout in Jalandhar, said: “Earlier, we used to hunt for talent in schools and local competitions. Now, kids come to us, saying that they want to take up javelin.” The department now has close to 70 children in javelin training, which is much more than in previous years.

Also, Naval and Bikramjit said they were overjoyed with the participation at the first “Javelin Challenge” the AFI organised at the Jawaharlal Nehru Stadium in Delhi recently.

As for access to proper training and coaches, Bikramjit said that, at the sub-junior and junior level, the focus was mostly on developing arm movement and strength. “We do it by making them bowl, like in cricket, or serving, like badminton,” he said. “They use a 200gm to 300gm javelin or even a bamboo one to keep their elbows safe. It is only later that they train with proper javelins.”

Naval, who is excited about the AFI’s upcoming javelin academy, said: “We are telling coaches to scout villages for talent and bring them to the academy. Local tournaments are being encouraged, too. We have shortlisted 50 children in the past two months itself.” The youngsters are being sent to Sports Authority of India centres in Patiala, Sonipat and Delhi.

All this from a magical throw in the far east.

Chopra’s job, though, is not done. He has more mountains to climb. But, if nothing else, the gold has ensured that there will be more climbers on the mountains in coming years.