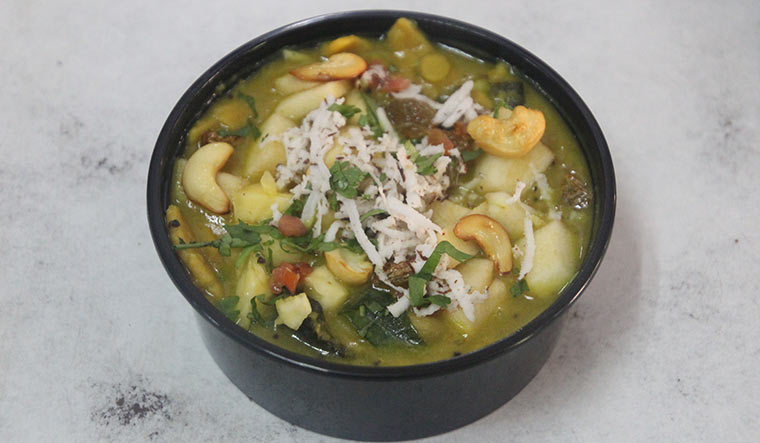 ON MONDAYS, YOU can see people thronging the popular Shree Thaker Bhojanalay in Mumbai, a restaurant owned by Maganbhai Tejaji Purohit. The people are here for the fruit dal dhokli, a unique dish made by adding fruits to the standard dal dhokli—the famous Gujarati dish made with dal and wheat flour. The flavour of the fruits lifts the dal dhokli. The new dish was initially aimed at children, who might not like the traditional version. Soon, the new variant became a hit with adults as well.

In Ahmedabad, Maganbhai’s legacy is taken forward by his daughter, Kalpana Purohit, 65. She started Purohit Thali in 1996, now run by herself, her son Rushabh and his wife, Sapna. The food does justice to its tagline, Ghar Jaisa Khana (Like Homemade Food). Though simple, it is sumptuous, with just the right seasoning. Kalpana learnt cooking from her father. He was the one who taught her to give twists to classic dishes. “At home, if someone does not like a particular dish, my father would whip up other options in a jiffy,” she says.

Her mind is trained to come up with unusual innovations. She gives the example of muli (radish). “Someone else might think of a muli sabzi or salad, but I could think of several other options,” she says. She recalls an incident of a Malayali boy requesting a sambar cooked with coconut oil. “He was so happy with my preparation that he actually cried,” she says.

This was one of the reasons why she did not want to start a standard tiffin service. “At home, you can only cook a limited variety of dishes and only send across a fixed quantity of food at a fixed price,” she says. This is also why she is not thinking of expanding. Currently, the restaurant can accommodate 20 people at a time. “My son, daughter-in-law and I love to pay personal attention to everything,” she says. “If we expand, we will [lose this privilege].” They take orders for home delivery and outdoor catering.

The Purohits specialise in Kathiawadi and Rajasthani cuisine, although Kalpana also cooks Maharashtrian delicacies. But the fruit dal dhokli remains the crown jewel on their menu.